Nobody Asked Me, But… No. 201: Hotel History: Architect Morris Lapidus

Home/Nobody Asked Me, But… No. 201: Hotel History: Architect Morris Lapidus

Nobody Asked Me, But… No. 201: Hotel History: Architect Morris Lapidus 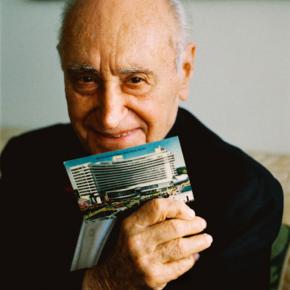 Morris Lapidus was an architect, primarily known for his Neo-baroque “Miami Modern” hotels constructed in the 1950s and 60s, which have since come to define that era’s resort-hotel style – synonymous with Miami and Miami Beach.

A Russian immigrant raised in New York, Lapidus designed over 1,000 buildings during a career spanning more than 50 years, much of it spent as an outsider to the American architectural establishment.

Born in Odessa in the Russian Empire (now the Ukraine), his Orthodox Jewish family fled Russian pogroms to New York when he was an infant. As a young man, Lapidus was interested in theatrical set design and studied architecture at Columbia University, graduating in 1927. Lapidus trained at the prominent Beaux Arts architectural firm of Warren and Wetmore. He then worked independently for 20 years as a successful retail architect with a specialty in store design before being approached to design vacation hotels in Miami Beach.

After his career in retail interior design, his first large commission was the Miami Beach Sans Souci Hotel (opened in 1949 and later called the RIU Florida Beach Hotel), followed closely by the Nautilus, the Di Lido, the Biltmore Terrace and the Algiers Hotels. All were built along Collins Avenue, and amounted to a single-handed redesign of an entire district. The hotels were an immediate popular success.

Then in 1952, Lapidus landed the job of designing the largest luxury hotel in Miami Beach, the Fontainebleau Hotel, which was a 1,200 room hotel built by Ben Novack on the former Firestone estate, and perhaps the most famous hotel in the world. It was followed the next year by the equally successful Eden Roc Hotel and the Americana Hotel (later the Sheraton Bal Harbour) in 1956 for the Tisch Brothers. The Sheraton was demolished by implosion shortly after dawn on Sunday, November 18, 2007.

The Lapidus style is idiosyncratic and immediately recognizable derived as it was from the attention-getting techniques of commercial store design: sweeping curves, theatrically backlit floating ceilings, ‘beanpoles’, and the ameboid shapes that he called ‘woggles’, ‘cheeseholes’, and painter’s palette shapes. His many smaller projects gave Miami Beach’s Collins Avenue its style, anticipating post-modernism. Beyond visual style, there is some degree of functionalism at work. His curving walls caught the prevailing ocean breezes in the era before central air-conditioning, and the sequence of his interior spaces was the result of careful attention to user experience: Lapidus heard complaints of endless featureless hotel corridors and when possible would curve his hallways to avoid the effect.

The Fontainebleau was built on the site of the Harvey Firestone estate and defined the new Gold Coast of Miami Beach. The hotel provided locations for the 1960 Jerry Lewis film The Bellboy, a success for both Lewis and Lapidus, and the James Bond thriller Goldfinger (1964). Its most famous feature is the ‘Staircase to Nowhere’ (formally called the “floating staircase”), which merely led to a mezzanine-level coat check and ladies’ powder-room, but offered the opportunity to make a glittering descent into the hotel lobby.

The Fontainebleau was once called, “the nation’s grossest national product.” The architecture critic of the New York Times Ada Louise Huxtable wrote in 1970 that a purple-and-gold Lapidus-designed bellhop uniform at the Americana Hotel in Miami Beach hit the eye “like an exploding gilded eggplant.” When Lapidus designed the Summit Hotel in New York for Loews Hotels, critic Huxtable said that “it was too far from the beach.”

Lapidus described his theory of design as follows:

“I wanted people to feel something. If two people were walking by one of my buildings and one said to the other, ‘Did you notice that building?’ and the other said ‘what building?’ I’ve failed. But if he looks at it and says ‘Oh my god’ or ‘that monstrosity,’ I was glad. Because he noticed me.”

Lapidus described his formula for success in the hotel business:

“I never thought I would live to see the day when, suddenly, magazines are writing about me, newspapers are writing about me. My whole success is I’ve always been designing for people, first because I wanted to sell them merchandise. Then when I got into hotels, I had to rethink, what am I selling now? You’re selling a good time.”

During the period before his death, Lapidus’ style came back into focus. It began with his designing upbeat restaurants on Miami Beach and the Lincoln Road Mall. Lapidus was also honored by the Society of Architectural Historians at a convention held at the Eden Roc Hotel in 1998. In 2000, the Smithsonian’s Cooper-Hewitt National Design Museum honored Lapidus as an American Original for his lifetime of work.

Disclosure: I served as Resident Manager of the 50-story, 1,842 room Americana of New York and as General Manager of the 783 room Summit Hotel in New York. Both of these great-looking hotels were designed by Morris Lapidus and are now being considered for designation by the New York Landmarks Preservation Commission.

My Other Published Books