Nobody Asked Me, But… No. 268: Hotel History: Wentworth by the Sea

Home/Nobody Asked Me, But… No. 268: Hotel History: Wentworth by the Sea

Nobody Asked Me, But… No. 268: Hotel History: Wentworth by the Sea 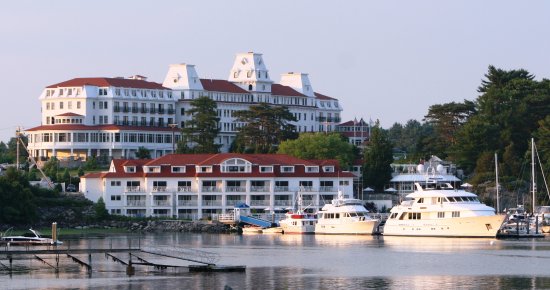 The Wentworth by the Sea (formerly the Hotel Wentworth), built in 1874 by Daniel E. Chase and Charles E. Campbell, was the largest wooden structure on the New Hampshire coast.  It was bought in 1879 by Frank Jones, wealthy owner of banks, breweries, insurance companies, racing stables, railroads and the world’s largest shoe-button company.  Jones hired the talented Frank W. Hilton (no relation of Conrad) to manage and promote the Wentworth.  Hilton introduced steam-driven elevators, Western Union telegraph, a telephone wire connected to the Rockingham Hotel, high-tech outdoor electrical arc lights, flush water closets, a dish-washing machine, croquet and lawn tennis, billiard room, bathing houses, athletic competitions, horses and an in-house orchestra.  With Frank Jone’s death in 1902, the hotel was sold but didn’t have another successful owner until Harry Beckwith bought the Wentworth in 1920 and operated it for 25 years.

In 1905, the hotel housed the Russian and Japanese delegations who negotiated the treaty of Portsmouth to end the Russo-Japanese War.  President Theodore Roosevelt proposed the peace talks and won the Nobel Peace Prize for his efforts.  Frank Jones’s executor, Judge Calvin Page followed his will and the Wentworth provided free accommodations to both delegations.  After the final document was signed at the Portsmouth Naval Shipyard, the Japanese hosted an “International Love Feast” at the Wentworth.

In 1916, the famous 56-year-old Annie Oakley was persuaded by Manager Harry Priest to demonstrate her horsemanship and shooting skills for guests at the Wentworth.  Two sports, golfing and swimming, sum up the Beckwith focus.  He hired the famous Donald Ross to design the finest nine-hole course in New England.  Beckwith built the Ship, a massive new building shaped like a cruise liner and located between the bridge to Rye and the hotel pier.  He also created a deep ocean-fed pool with a new cement floor.  In accordance with the racist fabric of America, Beckwith promised his guests that they would receive the finest in gentile-only accommodations.  The Wentworth prospered through Prohibition and survived even the Great Depression but was closed during World War II when the military took over the hotel’s facilities for the duration.

By the mid-1970s, both the Wentworth and the Smiths were aging and deteriorating.  In the fall of 1980, after thirty-four consecutive summers, the Smiths sold the hotel to a Swiss conglomerate, the Berlinger Corporation who tried without success to keep the Wentworth running year-round.  Finally Henley Properties, the fourth owner in seven years, bulldozed eighty-five percent of the “newer” buildings and gutted the oldest portion of the hotel down to its wooden studs.  With declining fortunes and changing owners, the Wentworth closed in 1982.  After plans for its demolition were announced, it appeared on the National Trust for Historic Preservation’s list of Americas Most Endangered Places and the History Channels America’s Most Endangered.

In 1997, Ocean Properties acquired the Wentworth by the Sea and, after extensive renovation and restoration, reopened in 2003 as a Marriott resort.  The hotel is a member of the National Trust for Historic Preservation and Historic Hotels of America.