Nobody Asked Me, But… No. 261: Hotel History: The Homestead, Hot Springs, Virginia

Home/Nobody Asked Me, But… No. 261: Hotel History: The Homestead, Hot Springs, Virginia

Nobody Asked Me, But… No. 261: Hotel History: The Homestead, Hot Springs, Virginia 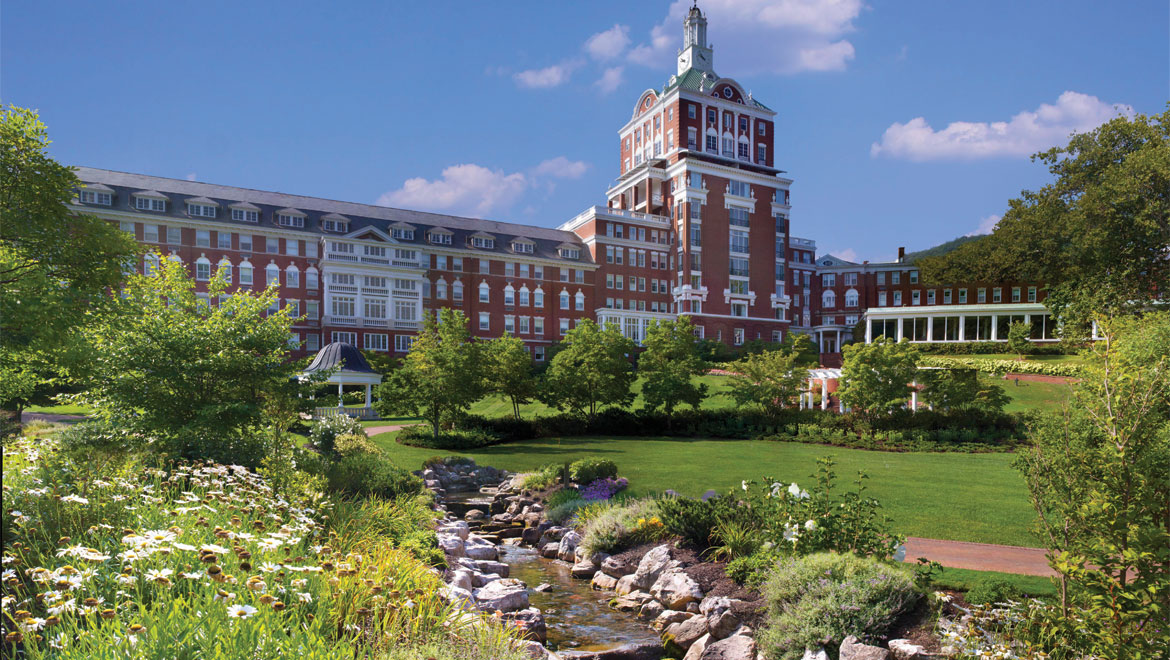 The Homestead is a famous luxury resort that opened a decade before the American revolutionary war. Located in the middle of the Allegheny Mountains, the area has the largest hot springs in Virginia. Native Americans used the waters to rejuvenate themselves during their many excursions through the area.

Captain Thomas Bullett and Charles and Andrew Lewis were part of the militia and surveyors during the French and Indian War. They were told of the many healing qualities of the waters in the area. In 1764, at the end of the war, Capt. Bullett received Gold and Silver medals for his services and was awarded a colonial land grant of 300 acres.

Within two years, the land was cleared and an 18-room wooden hotel was built. In 1766, The Homestead was named in honor of the Homesteaders who built the resort and bathhouses. From 1764 until 1778, Bullett operated the resort until he died during the American Revolutionary War. His family retained ownership of the resort until 1832.

In 1832, Dr. Thomas Goode purchased the resort from the Bullett family along with the Resort in Warm Springs and Healing Springs. He was a prominent physician who was responsible for the European style of many different spa therapies. One of the most famous treatments still in use is the Cure, which is a salt scrub followed by a Swiss shower. Dr. Goode passed away in 1858 and upon his death, the family took over the ownership until the early 1880s.

M.E. Ingalls, a prominent lawyer from Cincinnati, Ohio came to the area in 1881, while doing research for the Chesapeake and Ohio Railroad Company who was looking to extend their lines. After seven years, Ingalls, J.P. Morgan and other investors came to an agreement to purchase The Homestead and to build a spur into the Hot Springs area. Within the first year of ownership, the investors raised over one million dollars to build a new hotel. On July 2, 1901, a fire which started in the pastry shop, burned the entire building. With the resort not being at full capacity, everyone escaped without any serious injury or loss of life. The staff was able to save the Spa, Casino, the cottages in Cottage Row and the Virginia Hotel which was immediately opened for the accommodation of the displaced guests.

The day after the fire, Ingalls, who was President of the resort, and the many investors met to discuss the resort’s future. With the smoke and embers still in the distance and insurance not available, they came to the conclusion to rebuild the resort. Within a year, the Great Hall was completed and the Homestead was back in business. Former guests of the resort returned to the grand hotel they loved. Within two years, the West Wing was added. In 1911, the Ingalls family acquired the resort. The East Wing was added in 1914, and M.E. Ingalls, Sr. passed away. In 1921, the Empire, Crystal, Garden rooms and Theatre were completed and in 1929, the tower was finished. The last major addition during the Ingalls family ownership was the Garden Wing in 1973.

From December 1941 until June 1942, following the United States entry into World War II, the Homestead served as a high-end internment camp for 785 Japanese diplomats and their families until they could be exchanged through neutral channels for their American counterparts. The diplomats were later transferred to the Greenbrier Hotel in West Virginia.

The Homestead features two golf courses. The Old Course started as a six-hole layout in 1892, and the first tee is the oldest in continuous use in the United States. It was expanded to 18 holes by 1901, and Donald Ross redesigned it in 1913. The Cascades Course is the most famous of the three, and is usually ranked among the top 100 U.S. courses by both Golf Digest and GOLF Magazine. It was designed by William S. Flynn (who was also a main architect for Shinnecock Hills), and opened in 1923. Famed PGA Tour champion Sam Snead lived in or near Hot Springs all of his life, and served for decades as the Homestead’s golf pro. One of the Homestead’s restaurants, Sam Snead’s Tavern, contains many memorabilia related to his career.

The ski area at The Homestead was opened in 1959. It is the oldest ski resort in Virginia, and the second-oldest continuously operating alpine ski resort in the Southern United States. The resort’s northwest-facing slope is serviced by five lifts, including a double chairlift which accesses the intermediate and advanced terrain at the top of the hill, and four surface lifts which serve the beginner terrain at the bottom. The resort offers a half-pipe and a terrain park for skiers and snowboarders, and a variety of other winter activities including snow tubing, snowshoeing, cross-country skiing, ice skating, and snowmobile tours.

In 1993, Club Resorts, a part of ClubCorp, acquired The Homestead and began a total restoration. In 2001, The Homestead unveiled a new Grand Ballroom and outdoor pool, along with state-of-the-art snowmaking for the ski area and a new Shooting Club House and Pavilion. In 2008, The Homestead built a 30′ x 20′ foot ice skating rink on the north slope of the property, next to the outdoor restaurant and gift shop.

In 2006, KSL Resorts acquired management of The Homestead and sold it to Omni Hotels in 2013.

The Omni Homestead Resort has been designated a National Historic Landmark and is a member of Historic Hotels of America, the official program of the National Trust for Historic Preservation.