Nobody Asked Me, But… No. 255: Hotel History: Shelton Hotel, New York

Nobody Asked Me, But… No. 255: Hotel History: Shelton Hotel, New York 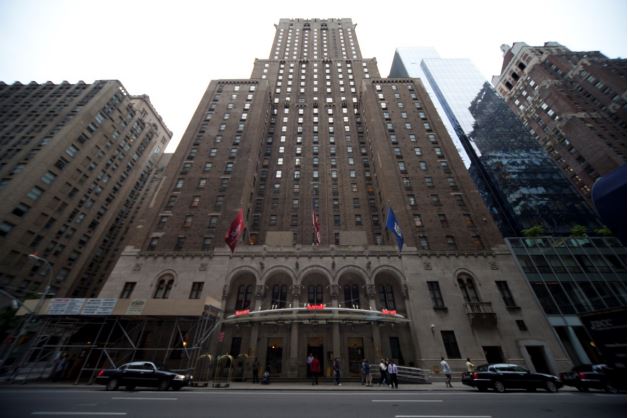 Few skyscrapers were as admired as the 1924 Shelton Hotel, at Lexington Avenue and 49th Street, now the New York Marriott East Side. Critics agreed that its picturesque 35-story façade and unusual setback design pointed the way of the future for the skyscraper.

The Shelton was built by the architecturally ambitious developer James T. Lee, who was also responsible for two luxurious apartment houses: 998 Fifth Avenue of 1912 and 740 Park Avenue of 1930. He was the grandfather of Jacqueline Kennedy Onassis, born Jacqueline Lee Bouvier.

Mr. Lee’s vision was a 1,200-room bachelor hotel with club-type characteristics: a swimming pool, squash courts, billiard rooms, a solarium and an infirmary. The New York World in 1923 claimed that the Shelton would be the tallest residential building in the world.

The architect, Arthur Loomis Harmon, covered the mass with irregular yellow-tan brick, roughened as if centuries old, and drew from Romanesque, Byzantine, early Christian, Lombard and other styles. But critics were more impressed that it recalled “no definite architectural style of the past,” as the artist Hugh Ferriss put it in The Christian Science Monitor in 1923.

The Shelton was one of the first buildings to take its form from a 1916 zoning law that required setbacks at certain heights to ensure light and air to the street. That made it quite different from the tall boxy hotels designed before the zoning change, like the 1919 Hotel Pennsylvania, opposite Pennsylvania Station.

“A stately, breath-taking building,” said Helen Bullitt Lowry and William Carter Halbert in The New York Times in 1924. The critic Lewis Mumford, traditionally stingy with praise, called it “buoyant, mobile, serene, like a Zeppelin under a clear sky” in Commonweal magazine in 1926.

Visionary design has its limits, however, and Mr. Harmon’s interiors appear to have been little different from other giant hotels of the period: great paneled lounges, a dining room with a beamed ceiling and long groin-vaulted hallways. A third of the rooms had shared baths, which must have posed complications in late 1924, when the Shelton reversed its men-only policy. A high gallery ran around the basement pool, which was decorated with polychromed tile.

From 1925 to 1929, Georgia O’Keeffe lived on the 30th floor of the Shelton Hotel with her husband, the photographer Alfred Stieglitz. With the possible exception of the Hotel Chelsea, it’s hard to think of another New York City hotel that’s had such a profound effect on an artist, especially a hotel you’ve probably never heard of.

Towering over Lexington Avenue between 48th and 49th Streets, the 31-story, 1,200-room Shelton Hotel was hailed as the tallest skyscraper in the world when it opened in 1923. Not only was it tall, it was a rarity—an elegant residential hotel for men with a bowling alley, billiard tables, squash courts, a barber shop and a swimming pool.

What was never in doubt was the building’s architectural significance. With a tasteful two-story limestone base and three brick setbacks stepping up to a central tower, the Shelton was groundbreaking. Critics deemed it the first building to successfully embody 1916 zoning requirements that prescribed setbacks to keep skyscrapers from becoming hulking eyesores. The Empire State Building is just one of the buildings the Shelton influenced. As late as 1977, New York Times architecture critic Ada Louse Huxtable declared the hotel a “landmark New York skyscraper.”

O’Keeffe couldn’t have asked for a more agreeably situated studio. From her airy lair, she enjoyed unimpeded, bird’s eye views of the river and the city’s growing crop of skyscrapers. Like Charles Demuth, Charles Sheeler and other artists of her era, O’Keeffe was fascinated by skyscrapers as a symbol of urban modernity, a core principle of Precisionism, the Post-World War I modern art style that celebrated America’s dynamic new landscape of bridges, factories and skyscrapers.

Ensconced in her Shelton perch, O’Keeffe created at least 25 paintings and drawings of skyscrapers and cityscapes. Among her best known is “Radiator Building—Night, New York,” a masterful celebration of the skyscraper mystique—and the iconic black and gold American Radiator Building now named Bryant Park Hotel.

But the Shelton’s renown shot sky high after a visit to the basement swimming pool in 1926 by the escape artist Harry Houdini. Sealed in an airtight, coffin-like box (albeit one equipped with a telephone in case an emergency), Houdini was lowered into the pool where he lay submerged for an hour and half. He emerged on schedule, fatigued but alive. “Anyone can do it,” he told The New York Times.

Despite its colorful history and architectural uniqueness, The Shelton, as is the case with almost all aging hotels fell from favor. There were only 11 full time residents in the mid- 1970s. In 1978 it became the Halloran of the foreclosed property. He hired Stephen B. Jacobs to redesign the interiors, reducing the number of rooms to 650.

By 2007 it was owned by Morgan Stanley who handed operation over to the Marriott Company.

The architecture and engineering firm Superstructures has a major campaign of exterior repairs under way. Richard Moses, the architect in charge of the project, says that Mr. Harmon’s high-up details, including heads, masks, griffins and gargoyles, are generally intact, although several that have been particularly beaten up by the elements have been replaced. Mr. Moses said that Mr. Harmon made the walls lean in slightly, to give the Shelton a greater solidity. The effect, barely perceptible high up, is evident at ground level.

The original interior of the 1924 hotel is down to fragments, like the stair hall to the right of the main lobby. The squash courts are gone; in their place is an exercise room on the 35th floor with spectacular views all the way round. The hotel has named rooms after Arthur Loomis Harmon, Alfred Stieglitz and Georgia O’Keeffe.