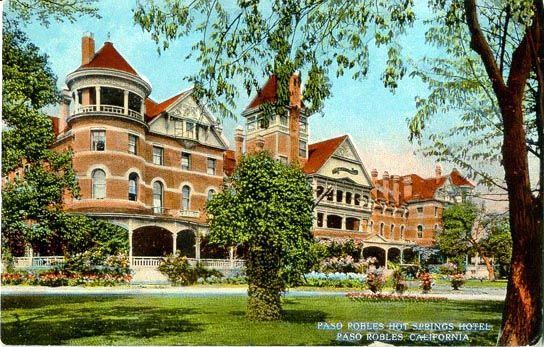 For centuries, the local Salinan Indian tribe enjoyed the hot mineral water that bubbled up in what is now the center of Paso Robles. They named it “Heaven’s Spot” because of the curative powers of the sulphur springs. When the Franciscan padres arrived, the tribes’ population was greatly reduced in just four generations. The Spanish colonial government intended for their California missions to be temporary institutions which they mistakenly thought would quickly convert the Indians to Catholicism and teach them Spanish and farming methods.

In 1857, James and Daniel Blackburn purchased land in El Paso de Robles which was a rest stop for travelers on the Camino Real trail. In 1864, the 14-room Hot Springs Hotel was built and operated in conjunction with the hot and cold sulphur springs. The Blackburns were convinced that their waters could cure an amazing number of ailments including rheumatism, syphilis, gout, neuralgia, paralysis, intermittent fever, eczema, afflictions of the womb and diseases of the liver and kidneys. By 1877, a Southern Pacific Railway line from San Francisco to Paso Robles took “only” twenty-one hours.

In 1891, a magnificent new three-story hotel was built to designs by architect Jacob Leuzen which was declared to be “absolutely fireproof”. The El Paso de Robles Hotel featured a seven-acre garden and a nine-hole golf course. It also contained a 20’x40’ hot springs plunge bath as well as 32 individual bathrooms, a library, beauty salon, barbershop and billiard and lounging rooms.

In 1906, a new hot springs bathhouse decorated with marble and ceramic tile opened. It was considered one of the finest and most complete of its time in the United States. In 1913, the world-famous Polish concert pianist, Ignace Paderewski, visited the Paso Robles Hotel. After three months of treatment at the hotel’s mineral hot springs for arthritis, he resumed his concert tour. He later returned to live at the hotel and bought two beautiful ranches just west of Paso Robles where he produced award-winning wines. During the next twenty-seven years the hotel was visited by U.S. president Theodore Roosevelt, Jack Dempsey, Douglas Fairbanks, Boris Karloff, Bob Hope and Clark Gable, among many others. When Major League baseball teams used Paso Robles for spring training, the Pittsburgh Pirates and Chicago White Sox stayed at the hotel and soaked in the mineral hot springs.

Then, in 1940, a spectacular fire completely destroyed the “fire-proof” Paso Robles Hotel. Fortunately, guests were able to escape unharmed. Only night clerk J.H. Emsley who discovered the fire suffered a fatal heart attack immediately after sounding the alarm. Within months after the fire, plans for a new hotel were drawn up and by February 1942, a new Paso Robles Inn opened for business.

El Paso de Robles is a city in San Luis Obispo County, California. It is known for its hot springs, its abundance of wineries, production of olive oil, almond orchards and hosting the California Mid-State Fair. As far back as 1795, Paso Robles has been known as California’s oldest watering place. By 1868, people came from Oregon, Nevada, Idaho and Alabama to enjoy the hot springs, mud baths and the iron and sand springs. Commercial winemaking was introduced to the Paso Robles region in 1882 when Andrew York from Indiana began planting vineyards and established the Ascension Winery, now the Epoch Winery.

In 1999, the Paso Robles Inn was purchased by Martin Resorts, a local family-owned enterprise, who instituted an extensive renovation project including the redrilling of the mineral spring well. In addition, they remodeled many guestrooms, added an outdoor dining room, restored the historic coffee shop, replaced the swimming pool, added thirty new hot springs spa rooms, restored the historic Grand Ballroom and opened the Steakhouse. In 2003, a devastating 6.5 earthquake damaged the Paso Robles Inn which required some new construction including eighteen new deluxe spa suites. Thanks to earlier reinforcement in 2000, the Grand Ballroom withstood the quake with only limited damage.

The Paso Robles Inn has been the cornerstone of its community for 140 years, welcoming travelers and doing its best to make guests feel at home. Paso Robles may have grown and prospered over the years, but in certain ways it has not changed; it continues to be a welcoming, relaxed city with a generous, community-oriented populace. In the spirit of the old west, the welcome sign is always out at the Paso Robles Inn.

The Paso Robles Inn is a member of Historic Hotels of America and the National Trust for Historic Preservation.