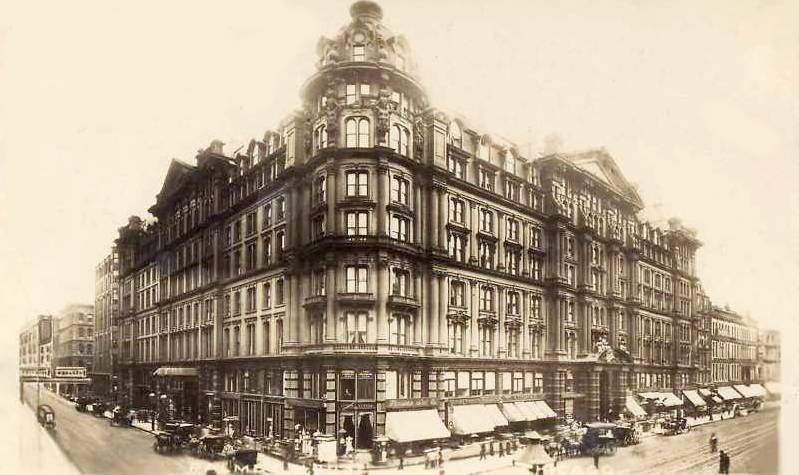 The original Palmer House was built in 1871 by Potter Palmer who began his career as a bank clerk in upstate New York. He later became a dry-goods store owner in Chicago where he revolutionized the retail trade. He was the first to make big window displays, to use big advertising spaces, to send goods on approval to homes and to hold bargain sales. He became a brilliant hotel man as he applied his successful department store methods to the operation of his hotel. He saw no reason why clerks, chefs and head waiters should not be subject to the same discipline as floorwalkers and counter-jumpers. The Hotel Gazette said he could be seen at all hours in the lobby and corridors of the Palmer House watching and directing.

There have been three different Palmer House hotels. The first, known as The Palmer, was built as a wedding gift from Potter Palmer to his bride Bertha Honorè. It opened on September 26, 1871, but incredibly was destroyed by fire thirteen days later in the Great Chicago Fire. Palmer quickly rebuilt the Palmer House which reopened in 1875. It was advertised as “The World’s Only Fire-Proof Hotel” and contained a grand lobby, ballrooms, elaborate parlors, bridal suites, cafes and restaurants. The hotel attracted well-to-do permanent residents who enjoyed the spacious quarters, master bedrooms, walk-in closets, multiple bathrooms, housekeeping and porter services. By 1925, Palmer erected a new 25-story hotel which was promoted as the largest hotel in the world. The architects were Holabird & Roche who were well known for their groundbreaking Chicago School of skyscrapers. They also designed the Stevens Hotel, the Cook County Courthouse, the Chicago City Hall and the Muehlebach Hotel in Kansas City.

The new Palmer House was once remembered for the fact that 225 silver dollars were embedded in the checkerboard tile floor of the barbershop. They were put there by William S. Eaton, lessee of the shop, who cashed in on the idea within the next few years. Everyone wanted to see that floor out of sheer curiosity or to verify that a barber could thus display his money.

As one of the longest-operating hotels in America, the Palmer House has an outstanding roster of famous guests including every president since Ulysses S. Grant, numerous world leaders, celebrities and Chicago’s movers and shakers. The Empire Room at the Palmer House became the showplace in Chicago. During the World’s Fair of 1933, an unknown ballroom dance team, Veloz and Yolanda won the hearts of the city and performed there for more than a year. They were followed by live entertainers including Guy Lombardo, Ted Lewis, Sophie Tucker, Eddie Duchin, Hildegarde, Carol Channing, Phyllis Diller, Bobby Darin, Jimmy Durante, Lou Rawls, Maurice Chevalier, Liberace, Louis Armstrong, Harry Belafonte, Peggy Lee, Frank Sinatra, Judy Garland and Ella Fitzgerald, among others.

In 1945, Conrad Hilton went to Chicago to purchase the Stevens Hotel, the largest hotel in the world with three thousand rooms and three thousand baths. After a prolonged negotiation with Stephen A. Healy, the owner millionaire contractor and ex-bricklayer, Hilton acquired the Stevens. Later in that same year, Hilton bought the Palmer House from Potter Palmer for $19,385,000. Hilton hired the recently-discharged U.S. Army Air Force Colonel Joseph Binns who had the ability to manage both hotels. Hilton reported in his “Be My Guest” autobiography: “I had gone to Chicago hoping to buy one gold mine and came home with two.”

In 1971, the Palmer House celebrated its 100th birthday. Octogenarian Conrad Hilton was present for the ceremonies. Chicago Mayor Richard J. Daly said, “Throughout the country and the world, there is no better known nor more highly esteemed hotel institution than the Palmer House. …. People who have been in and out of our city think of the Palmer House when they think of Chicago.”

In 2005, the Palmer House was acquired by Thor Equities for $240 million. Joseph A. Sitt, president of Thor, embarked on a $170 million renovation that included upgrading 1,000 rooms (out of a total of 1,639), adding an underground parking garage, removing a series of fire escapes that marred the State Street facade and adding a new bar and restaurant to the hotel’s spectacular lobby. Perhaps the Palmer House Hilton promotional literature says it best:

Situated just blocks from the Magnificent Mile and the downtown Chicago Theater District, the wedding gift from Potter Palmer continues to delight the weariest of travelers and the most demanding of hosts.

The Palmer House Hilton is a member of the Historic Hotels of America program of the National Trust for Historic Preservation. It was Chicago’s first hotel with elevators, and the first hotel with electric light bulbs and telephones in guest rooms. Although the hotel had been dubbed the longest continuously-operating hotel in North America, it closed in March 2020 due to the Covid-19 pandemic and reopened on June 17, 2021.