Nobody Asked Me, But… No. 253; Hotel History: Hotel Pennsylvania

Home/Nobody Asked Me, But… No. 253; Hotel History: Hotel Pennsylvania

Nobody Asked Me, But… No. 253; Hotel History: Hotel Pennsylvania 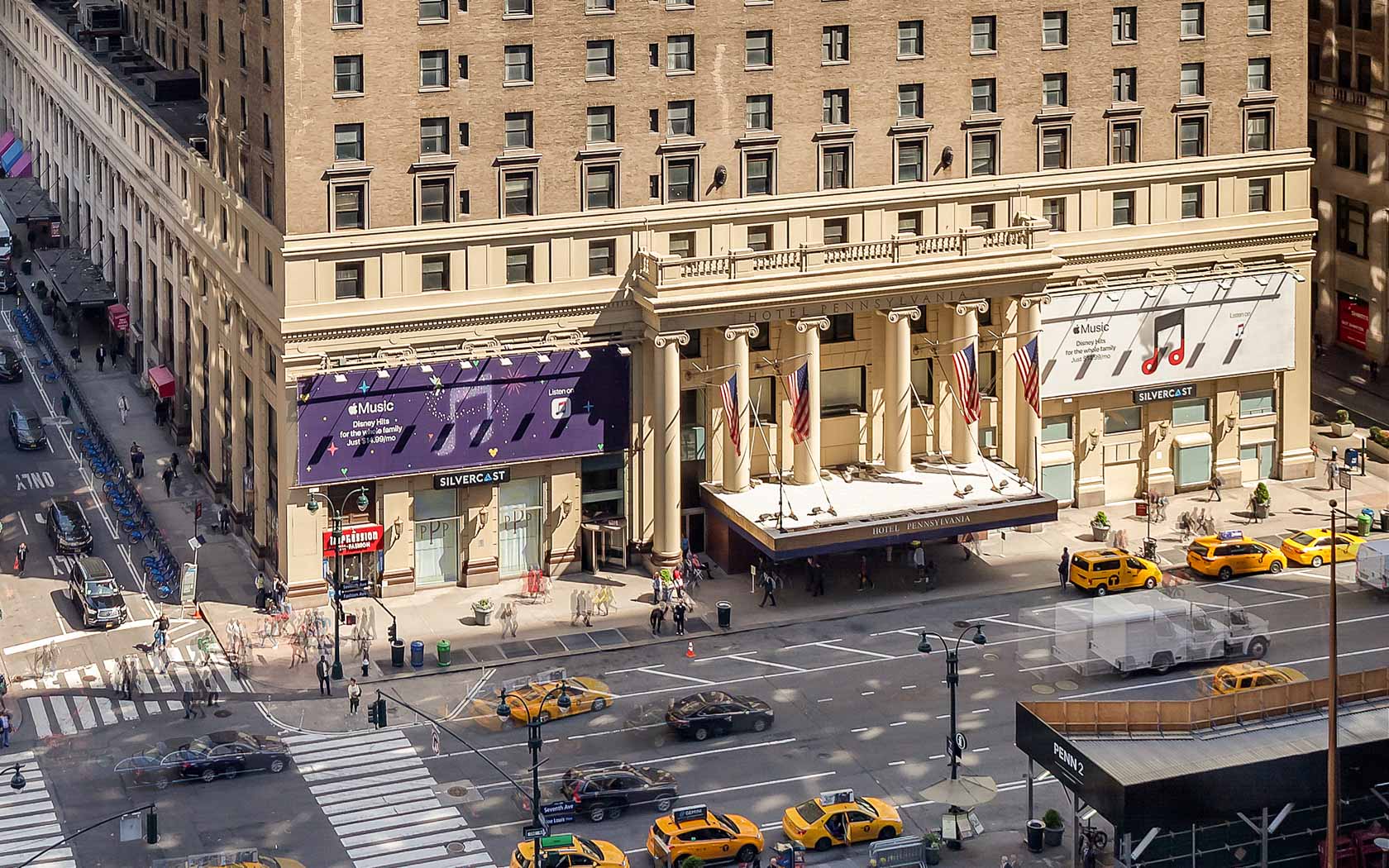 An iconic hotel in mid-town Manhattan is closing its doors for good. The Hotel Pennsylvania will not reopen, succumbing to this past year’s Covid 19 pandemic and years of narrowly avoiding the chopping block. The fourth-largest hotel in New York City was well situated, right across from Madison Square Garden and Penn Station, making it a natural and affordable stop for travelers and concert-goers alike.

The Hotel Pennsylvania was built by the Pennsylvania Railroad and operated by Ellsworth Statler. It opened on January 25, 1919 and was designed by William Symmes Richardson of the firm of McKim, Mead & White, which also designed the original Pennsylvania Station located across the street.

Statler Hotels, which had managed the Pennsylvania since its construction, acquired the property outright from the Pennsylvania Railroad on June 30, 1948 and renamed it the Hotel Statler on January 1, 1949. All 17 Statler hotels were sold to Conrad Hilton in 1954 and the hotel became The Statler Hilton in 1958. It operated under this name until 1979, when Hilton sold the hotel to developer William Zeckendorf, Jr., for $24 million. The hotel was renamed the New York Statler and was operated by Dunfey Family Hotels, a division of Aer Lingus. The hotel was sold again for $46 million in August 1983. A 50% interest was bought by Abelco, an investment group consisting of developers Elie Hirschfeld, Abraham Hirschfeld, and Arthur G. Cohen, with the other 50% bought by the Penta Hotels chain, a joint-venture of British Airways, Lufthansa, and Swissair. The new owners renamed the hotel the New York Penta and undertook a massive renovation. In 1991, Penta’s partners bought out the chain’s stake in the hotel and returned it to its original name, Hotel Pennsylvania.

There is a fair amount of history in this huge hotel, most notably The Glenn Miller Orchestra’s “Pennsylvania 6-5000.” Until early May 2021, you could still call 212-PE6-5000, and hear the refrain “Pennsylvania 6-5000” before connecting to an operator. It was the longest continuous use of a phone number in New York. From the moment you called the hotel, music and history was inviting you to recall the great Hotel Pennsylvania tradition.

The Café Rouge was originally the main restaurant in the Hotel Pennsylvania. It served as a nightclub for many years, but now operates as a separate venue from the hotel entirely, as a multi-purpose space. It is the only space in the hotel that escaped significant alterations during the building’s massive 1980s renovation.

In the late 1930s and early 1940s, The Café Rouge had a big band remote connection to the NBC Red Network (after 1942, the NBC Radio Network) and became known for the live performances held inside. Multiple artists played at the Café – such as The Dorsey Brothers, Wood Herman, Count Basie, Duke Ellington, and The Andrews Sisters.

One evening in November 1939, while in the midst of a steady long-term engagement at the Café Rouge, bandleader Artie Shaw left the bandstand between sets and decided he had had enough of the band business and all the hype of having become, in a year and a half, the leader of the most popular big band in the country. Shaw essentially quit his own band on the spot, the act obliging The New York Times to comment in an editorial.

During 1940-42, the Glenn Miller Orchestra also had repeated long-term bookings in the room during the three years of Miller’s highest profile as a bandleader. Miller’s orchestra broadcast from the Café; some were recorded by RCA Victor. Shaw’s principal orchestrator from 1937-39, Jerry Gray, was immediately hired by Miller as a staff arranger when Shaw deserted his band; it was during Miller’s 1940 engagement at the hotel that Gray wrote the tune “Pennsylvania 6-500” (with lyrics later added by Carl Sigman) that made use of the Hotel’s telephone number, 212-736-5000, which was the New York phone number in longest continuous use, Les Brown’s band, with its vocalist Doris Day, introduced their song “Sentimental Journey” at the Café in November 1944.

The New York City Landmarks Preservation Commission reviewed the Café Rouge for landmarking status on the basis of evaluation papers created by the Hotel Pennsylvania Preservation Society (formerly the Save Hotel Pennsylvania Foundation). On October 22, 2010, the Café was rejected as a candidate for landmarking, most likely because the 15 Penn Plaza project was approved and the moderate, but not destructive alterations of the interior since its construction. The 15 Penn Plaza project, would have included the demolition of the Café.

Most of the original interior décor remains intact. The foundation and beamed ceiling and other architectural details remain, though the entire room, as well as the ceiling, have been painted over in white. Numerous events from 2013 New York Fashion Week were held in the Café Rouge.

In 2014, the Café Rouge was converted to an indoor basketball court known as Terminal 23, to commemorate the launch of the Melo M10 by the Jordan Brand division of Nike. It provides a facility for youth and high school players.

Notable events at the Hotel Pennsylvania

•  On May 6 and 8, 1924, Harry Houdini debunked Joaquin María Argamasilla, a 19-year old Spaniard who claimed he had X-ray vision.

•  In December 1925, William Faulkner stayed at The Hotel Pennsylvania while writing one of his many novels. Later he would go on to receive the Nobel Prize for Literature.

•  In the 1920s, Galveston crime boss Johnny Jack Nounes threw a $40,000 party at the Hotel Pennsylvania. Among the guests were silent film stars Clara Bow and Nancy Carroll, who were said to have bathed in tubs of champagne.

•  On November 17, 1935, Herbert Hoover spoke before the Ohio Society of New York at the Hotel Pennsylvania

•  In 1946, the American Russian Institute presented its first annual award to the late President Franklin D. Roosevelt at the Hotel Pennsylvania.

•  On November 28, 1953, U.S. Army bacteriologist Frank Olson crashed through a window on the 13th floor and fell over 150 feet to the sidewalk below. His family was told that he “jumped or fell” to his death. Days before his death, however, the CIA had dosed him with LSD without his knowledge or consent.

•  The Muppet character Statler of Statler and Waldorf was named after the hotel, when it was the Statler Hilton.

•  The Hotel Pennsylvania appeared in the 1986 film “The Manhattan Project, as the setting of a science fair. Rather than construct a set and populate it with actors, the filmmakers hosted an actual science fair in the hotel, and simply filmed as it was going on.

•  Episodes of UWF Fury Hour were filmed at the venue’s Grand Ballroom in 1991.

•  In 1997, the Grand Ballroom was leased by NEP Group and retrofitted into a television studio. The facility is known as NEP Penn Studio and is where television shows including Maury, Sally Jessy Raphael, 2 Minute Drill, The People’s Court, and The Opposition with Jordan Klepper was taped.

•  In 2009, old studios in the hotel were rebuilt and consolidated into a new 10,000-square-foot studio for the sitcom Sherri.

“We used to have the greatest train station in the world right across the street, literally right across the street, and sadly for me I was too young – when I got to New York it was already gone. The language that was used to destroy that station is the exact same language Steve Roth is using today to argue to destroy this; it’s tired, it’s old, it’s dirty, can’t be reused. We need something new. Everybody admits that what happened across the street was one of the worst crimes in terms of architectural legacy that ever happened in this country. We’re about to commit the exact same crime right here with the Hotel Pennsylvania.”