Nobody Asked Me, But… No. 258: Hotel History: The Willard Hotel, Washington, D.C.

Home/Nobody Asked Me, But… No. 258: Hotel History: The Willard Hotel, Washington, D.C.

Nobody Asked Me, But… No. 258: Hotel History: The Willard Hotel, Washington, D.C. 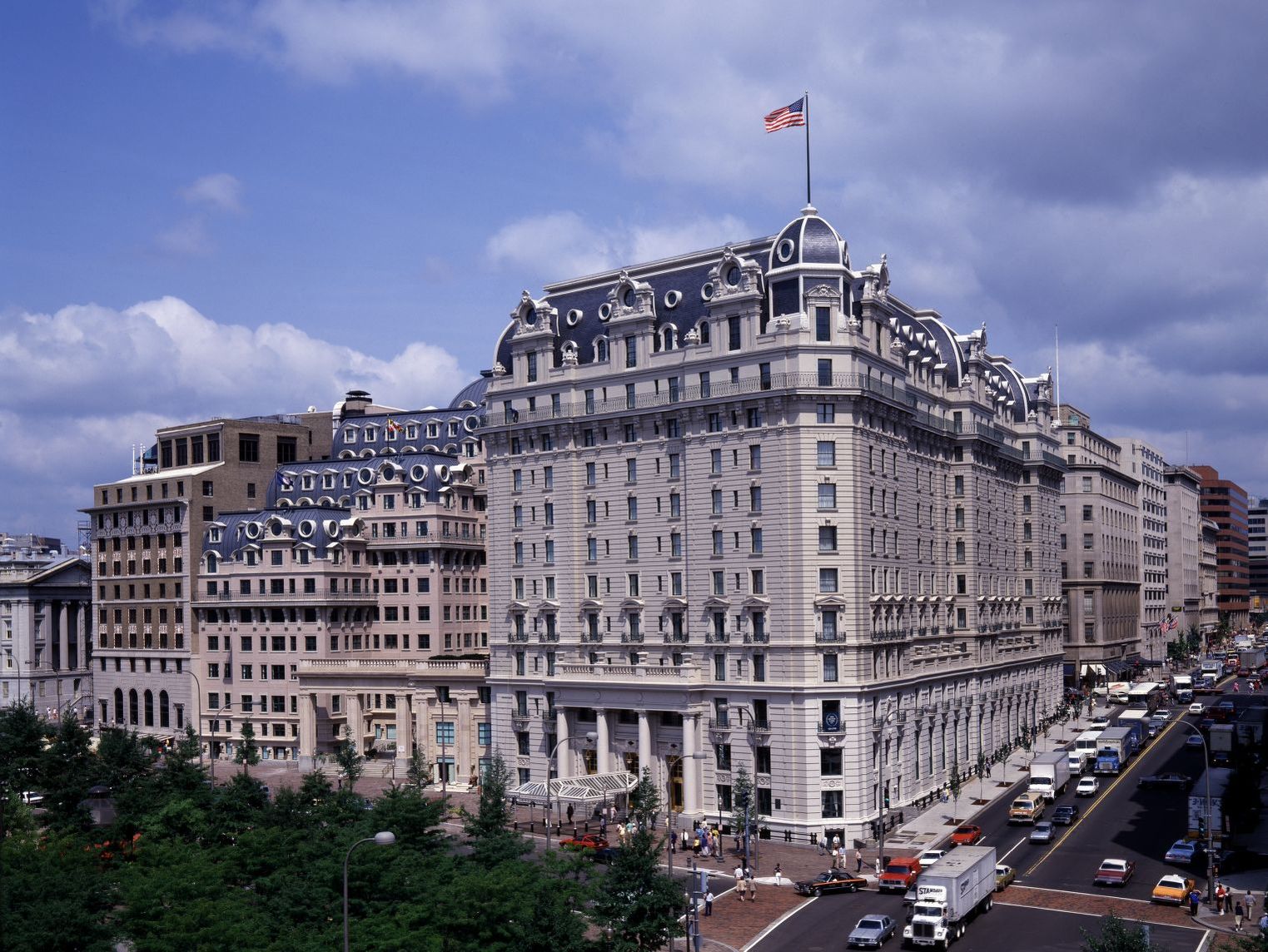 The Willard InterContinental Washington, commonly known as the Willard Hotel, is a historic luxury Beaux-Arts hotel located at 1401 Pennsylvania Avenue NW in downtown Washington, D.C. Among its facilities are numerous luxurious guest rooms, several restaurants, the famed Round Robin Bar, the Peacock Alley series of luxury shops, and voluminous function rooms. Owned by InterContinental Hotels & Resorts, it is two blocks east of the White House, and two blocks west of the Metro Center station of the Washington Metro.

The National Park Service and the U.S. Department of the Interior describe the history of the Willard Hotel as follows:

American author Nathaniel Hawthorne observed in the 1860s that “the Willard Hotel more justly could be called the center of Washington than either the Capitol or the White House or the State Department.”  From 1847 when the enterprising Willard brothers, Henry and Edwin, first set up as innkeepers on the corner of 14th Street and Pennsylvania Avenue, the Willard has occupied a unique niche in the history of Washington and the nation.

The Willard Hotel was formally founded by Henry Willard when he leased the six buildings in 1847, combined them into a single structure, and enlarged it into a four-story hotel he renamed the Willard Hotel. Willard purchased the hotel property from Ogle Tayloe in 1864.

In the 1860s, author Nathaniel Hawthorne wrote that “the Willard Hotel more justly could be called the center of Washington than either the Capitol or the White House or the State Department.”

From February 4 to February 27, 1861, the Peace Congress, featuring delegates from 21 of the 34 states, met at the Willard in a last-ditch attempt to avert the Civil War. A plaque from the Virginia Civil War Commission, located on Pennsylvania Ave. side of the hotel, commemorates this courageous effort. Later that year, upon hearing a Union regiment singing “John Brown’s Body” as they marched beneath her window, Julia Ward Howe wrote the lyrics to “The Battle Hymn of the Republic” while staying at the hotel in November 1861.

On February 23, 1861, amid several assassination threats, detective Allan Pinkerton smuggled Abraham Lincoln into the Willard; there Lincoln lived until his inauguration on March 4, holding meetings in the lobby and carrying on business from his room.

Many United States presidents have frequented the Willard, and every president since Franklin Pierce has either slept in or attended an event at the hotel at least once; the hotel hence is also known as “the residence of presidents.” It was the habit of Ulysses S. Grant to drink whiskey and smoke a cigar while relaxing in the lobby. Folklore (promoted by the hotel) holds that this is the origin of the term “lobbying,” as Grant was often approached by those seeking favors. However, this is probably false, as Webster’s Ninth New Collegiate Dictionary dates the verb “to lobby” to 1837. Grover Cleveland lived there at the beginning of his second term in 1893, because of concern for his infant daughter’s health following a recent outbreak of scarlet fever in the White House. Plans for Woodrow Wilson’s League of Nations took shape when he held meetings of the League to Enforce Peace in the hotel’s lobby in 1916. Six sitting Vice-Presidents have lived in the Willard. Millard Fillmore and Thomas A. Hendricks, during his brief time in office, lived in the old Willard; and then Vice-Presidents, James S. Sherman, Calvin Coolidge and finally Charles Dawes all lived in the current building for at least part of their vice-presidency. Fillmore and Coolidge continued in the Willard, even after becoming president, to allow the first family time to move out of the White House.

Several hundred officers, many of them combat veterans of World War I, first gathered with the General of the Armies, John J. “Blackjack” Pershing, at the Willard Hotel on October 2, 1922, and formally established the Reserve Officers Association (ROA) as an organization.

The present 12-story structure, designed by famed hotel architect Henry Janeway Hardenbergh, opened in 1901. It suffered a major fire in 1922 which caused $250,000 (equivalent to $3,865,300 as of 2020), in damages. Among those who had to be evacuated from the hotel were Vice President Calvin Coolidge, several U.S. senators, composer John Philip Sousa, motion picture producer Adolph Zukor, newspaper publisher Harry Chandler, and numerous other media, corporate, and political leaders who were present for the annual Gridiron Dinner. For many years the Willard was the only hotel from which one could easily visit all of downtown Washington, and consequently it has housed many dignitaries during its history.

The Willard family sold its share of the hotel in 1946, and due to mismanagement and the severe decline of the area, the hotel closed without a prior announcement on July 16, 1968. The building sat vacant for years, and numerous plans were floated for its demolition. It eventually fell into a semi-public receivership and was sold to the Pennsylvania Avenue Development Corporation. They held a competition to rehabilitate the property and ultimately awarded it to the Oliver Carr Company and Golding Associates. The two partners then brought in the InterContinental Hotels Group to be a part-owner and operator of the hotel. The Willard was subsequently restored to its turn-of-the-century elegance and an office-building contingent was added. The hotel was thus re-opened amid great celebration on August 20, 1986, which was attended by several U.S. Supreme Court justices and U.S. senators. In the late 1990s, the hotel once again underwent significant restoration.

Martin Luther King Jr., wrote his famous “I Have a Dream” speech in his hotel room at the Willard in the days leading up to his August 28, 1963 March on Washington for Jobs and Freedom.

On September 23, 1987, it was reported that Bob Fosse collapsed in his room at the Willard and later died. It was subsequently learned that he actually died at George Washington University Hospital.

Steven Spielberg shot the finale of his film Minority Report at the hotel in the summer of 2001. He filmed with Tom Cruise and Max von Sydow in the Willard Room, Peacock Alley and the kitchen.

Situated just two blocks from the White House, the hotel is replete with the ghosts of the famous and powerful. Over the years, it has been the gathering place for presidents, politicians, governors, literary and cultural figures. It was at the Willard that Julia Ward Howe composed “The Battle Hymn of the Republic.” Gen. Ulysses S. Grant held court in the lobby and Abraham Lincoln borrowed house slippers from its proprietor.

Presidents Taylor, Fillmore, Pierce, Buchanan, Taft, Wilson, Coolidge and Harding stayed at the Willard. Other notable guests have included Charles Dickens, Buffalo Bill, David Lloyd George, P.T. Barnum, and countless others. Walt Whitman included the Willard in his verses and Mark Twain wrote two books there in the early 1900s. It was Vice President Thomas R. Marshall, annoyed at the Willard’s high prices, who coined the phrase “What this country needs is a good 5-cent cigar.”

The Willard sat vacant from 1968 and in danger of demolition until 1986 when it was restored to its former glory. A $73 million restoration project was carefully planned by the National Park Service to recreate the hotel as historically accurate as possible. Sixteen layers of paint were scraped from the woodwork to ascertain the hotel’s original 1901 colors.

Most restorations of venerable buildings fall into one of two categories they are either attempts to recreate as faithfully as possible what once was, or they are inventive interpretations that use the original architecture as a jumping-off point.

The newly rehabilitated Willard Hotel is both. Half of this project involves the respectful restoration of Washington’s greatest hotel building, a distinguished Beaux-Arts structure by Henry Hardenbergh that had been derelict since 1968, a victim of the decline of its neighborhood, a few blocks east of the White House. The other half is an exuberantly conceived, brand new addition containing offices, shops, public plaza and a new ballroom for the hotel.