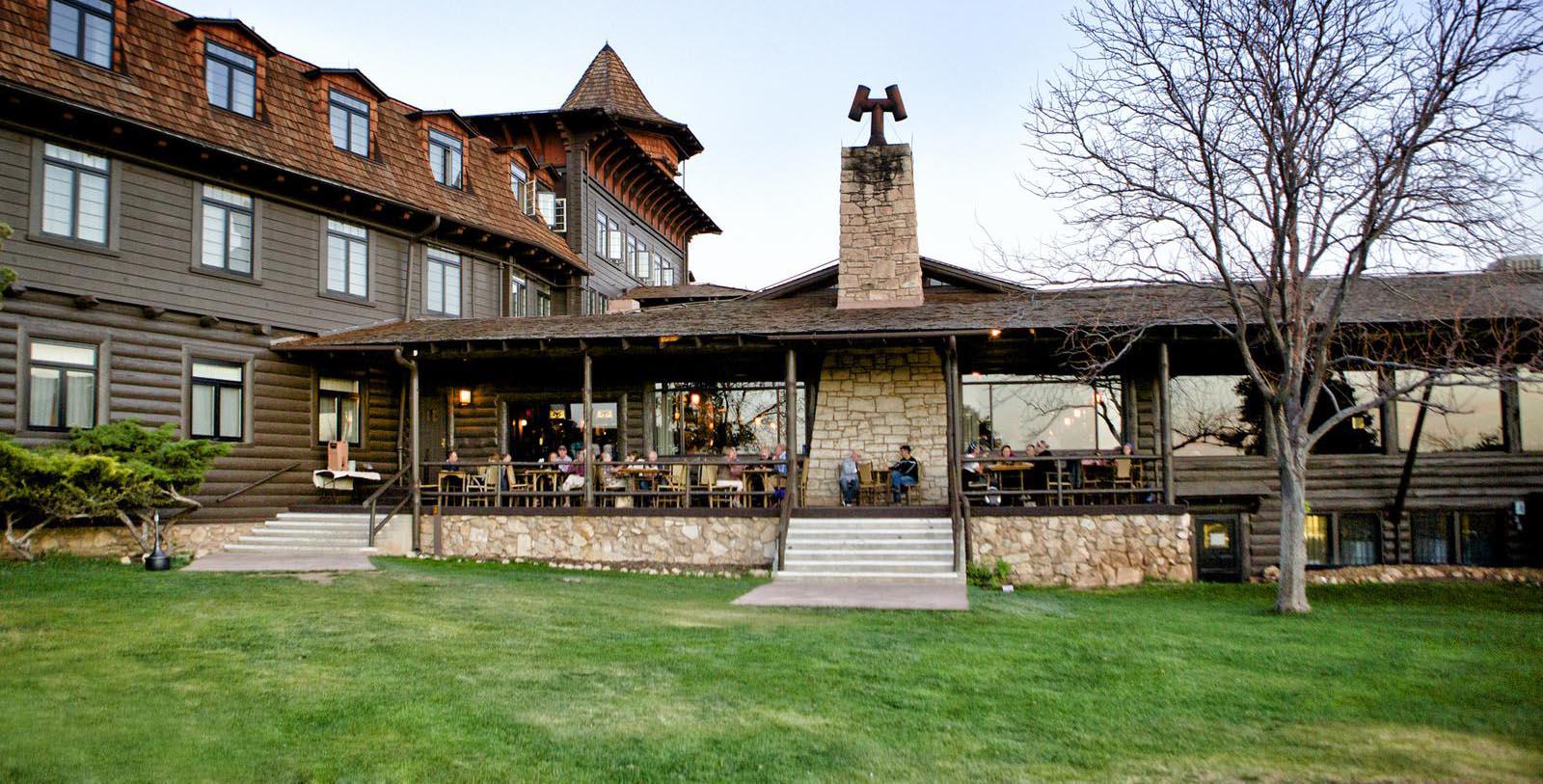 One hundred and sixteen years ago, two architectural jewels opened in the Grand Canyon National Park: the 95-room El Tovar Hotel and the adjacent Hopi House Gift Shop. Both reflected the foresight and entrepreneurship of Frederick Henry Harvey whose business ventures included restaurants, hotels, railroad dining cars, gift shops and newsstands. His partnership with the Atchison, Topeka and Sante Fe Railway introduced many new tourists to the American Southwest by making rail travel and dining comfortable and adventurous. Employing many Native-American artists, the Fred Harvey Company also collected examples of indigenous basketry, beadwork, kachina dolls, pottery and textiles. Harvey was known as the “Civilizer of the West.”

Long before the U.S. Congress designated the Grand Canyon National Park in 1919, the earliest tourists came via stagecoach and stayed overnight in tents, cabins or primitive commercial hotels. However, when the Atchison, Topeka and Sante Fe Railway opened a spur almost directly to the South Rim of the Grand Canyon, it created a shortage of adequate accommodations. In 1902, the Sante Fe Railway commissioned construction of El Tovar, a first-class four-story hotel designed by Chicago architect Charles Whittlesey with almost one hundred rooms. The hotel cost $250,000 to build and was the most elegant hotel west of the Mississippi River. It was named “El Tovar” in honor of Pedro de Tovar of the Coronado Expedition. Despite its rustic features, the hotel contained a coal-fired generator that powered electric lights, steam heat, hot and cold running water and indoor plumbing. However, since none of the guestrooms had a private bathroom, guests used a public bathroom on each of the four floors.

The hotel also had a greenhouse to grow fresh fruits and vegetables, a chicken house and a dairy herd to provide fresh milk. Other features included a barbershop, solarium, roof-top garden, billiard room, art and music rooms and Western Union telegraph service in the lobby.

The new hotel was built before the Grand Canyon became a protected Federal national park following President Theodore Roosevelt’s 1903 visit to the Canyon. Roosevelt said, “I want to ask you to do one thing in connection with it in your own interest and in the interest of the country- to keep this great wonder of nature as it is now… I hope you will not have a building of any kind, not a summer cottage, a hotel or anything else, to mar the wonderful grandeur, the sublimity, the great loveliness and beauty of the Canyon. Leave it as it is. You cannot improve upon it.”

Fred Harvey’s restaurants were built almost every 100 miles along the Sante Fe Railway through Kansas, Colorado, Texas, Oklahoma, New Mexico and California. He staffed his restaurants and hotels with “Harvey Girls”, young women recruited across the U.S. with “good moral character, at least an eighth grade education, good manners, clear speech and a neat appearance.” Many of them later married ranchers and cowboys and named their children “Fred” or “Harvey”. Comedian Will Rogers said of Fred Harvey, “He kept the west in food and wives.”

The El Tovar was placed on the National Register of Historic Places on September 6, 1974. It was declared a National Historic Landmark on May 28, 1987 and is a member of Historic Hotels of America since 2012. The Hotel has hosted such luminaries as Albert Einstein, Zane Grey, President Bill Clinton, Paul McCartney, among many others.

The Hopi House Gift Shop (1905) was built to blend into the neighboring environment and modeled after Hopi pueblo dwellings that used local natural materials such as sandstone and juniper in their construction. While El Tovar catered to upscale tastes, Hopi House represented emerging interest in Southwestern Indian arts and crafts promoted by the Fred Harvey Company and the Sante Fe Railway.

Hopi House was designed by architect Mary Jane Elizabeth Colter starting an association with the Fred Harvey Company and the National Park Service that lasted more than 40 years. It was designed and built as a place to sell Indian artwork. She enlisted the help of Hopi artists from nearby villages to help build the structure. Colter made sure that the interior reflected local Pueblo building styles. Small windows and low ceilings minimize the harsh desert sunlight and lend a cool and cozy feel to the interior. The building includes wall niches, corner fireplaces, adobe walls, a Hopi sand painting and ceremonial altar. Chimneys are made from broken pottery jars stacked and mortared together.

When the building opened, the second floor exhibited a collection of old Navajo blankets, which had won the grand prize at the 1904 St. Louis World’s Fair. This display eventually became the Fred Harvey Fine Arts Collection, which included nearly 5,000 pieces of Native American art. The Harvey collection toured the United States, including prestigious venues such as the Field Museum in Chicago and the Carnegie Museum in Pittsburgh, as well as international venues such as the Berlin Museum.

Hopi House, then and now, offers a wide range of Native American arts and crafts for sale: pottery and woodcarvings arranged on counters draped in hand-woven Navajo blankets and rugs, baskets hung from peeled-log beams, kachina dolls, ceremonial masks, and woodcarvings illuminated by the suffuse light of the structure’s tiny windows. Hopi murals decorate the stairway walls, and religious artifacts are part of a shrine room.

The Fred Harvey Company invited Hopi artisans to demonstrate how they made jewelry, pottery, blankets, and other items that would then be put up for sale. In exchange, they received wages and lodging at Hopi House, but they never had any ownership of Hopi House and were rarely allowed to sell their own goods directly to tourists. In the late 1920s, the Fred Harvey Company began allowing some Hopi Indians into positions of responsibility in the business. Porter Timeche was hired to demonstrate blanket weaving but was so fond of chatting with visitors that he rarely finished a blanket to sell, at which point he was offered a job as a salesman in the Hopi House gift shop. He later served as a buyer for the Fred Harvey concessions at the Grand Canyon. Fred Kabotie, the famed artist who painted the Hopi Snake Legend mural inside Desert View Watchtower, managed the gift shop at Hopi House in the mid-1930s.

From the prominence of Hopi House many visitors may assume that the Hopi were the only tribe native to the Grand Canyon, but this is far from the truth. In fact, today 12 different tribes are recognized as having cultural ties to the Canyon, and the National Park Service has been working to accommodate the cultural needs of these other groups as well.

Hopi House was designated a National Historic Landmark in 1987. During a complete renovation in 1995, Hopi consultants participated in the restoration effort and helped ensure that none of the original architectural or design elements were altered. Hopi House and the Lookout Studio are major contributing structures in the Grand Canyon Village National Historic Landmark District.