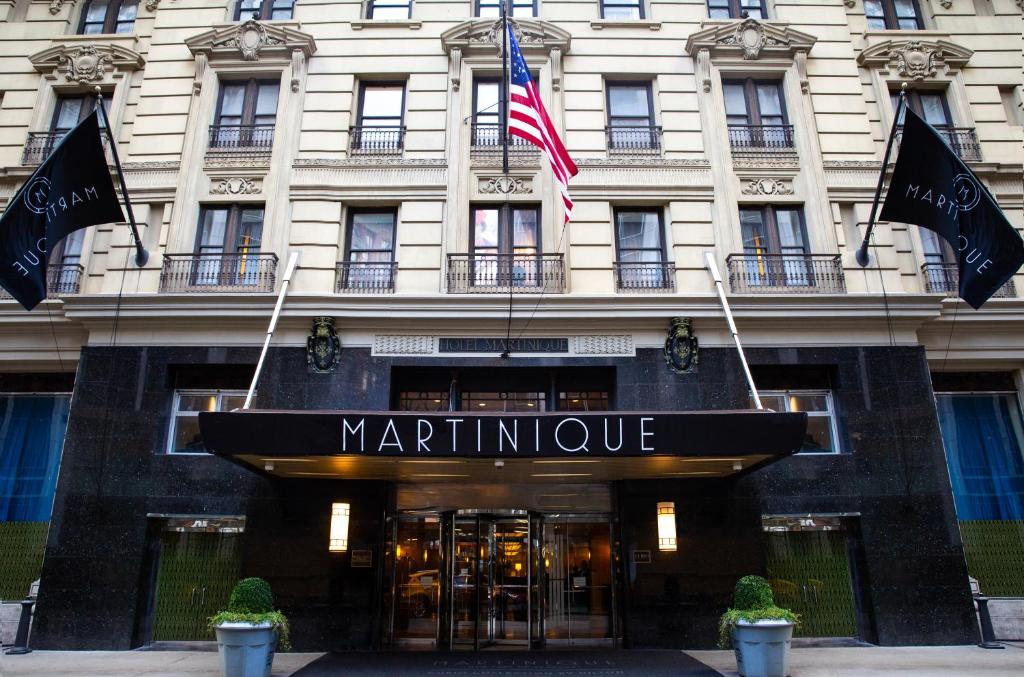 Nobody Asked Me But… The family of Stanley Turkel would like to share that Stanley Turkel passed away on Friday, August 12th, 2022 after a brief illness. Stanley had completed his 270th article for this newsletter which is below. It was a great pleasure for him to have you, a receptive readership, over the last 20-plus years. Thank you. Stanley’s obituary can be found on his website.  If you are so inclined, Stanley would appreciate donations to The Southern Poverty Law Center or the ACLU in his name.

The Hotel Martinique (560 rooms) at the northeast corner of Broadway and 32nd Street was constructed in three phases in 1897-98, 1901-03 and 1909-11.  Developer William R. H. Martin built and expanded his hotel because the center of theater life had moved up Broadway to 39th Street where the Metropolitan Opera House had been built in 1883. Martin hired the distinguished architect Henry Janeway Hardenbergh (1874-1918).

Hardenbergh, who began his own architectural practice in New York in 1870, became one of the city’s most distinguished architects. Recognized for their picturesque compositions and his buildings often took their inspiration from the French, Dutch, and German Renaissance styles.

Hardenbergh is best known for his luxury hotel and apartment house designs.  Among the earliest of these are the Dakota Apartments (a designated New York City Landmark) and the Hotel Albert, now Albert Apartments. His earliest midtown hotels, the original Waldorf-Astoria (Fifth Avenue and West 34th Street), and the Manhattan Hotel (Madison and East 42nd Street) have all been demolished, but when constructed they set the standard for luxury hotel design, both the exterior and interior. Hardenbergh continued to perfect his luxury hotel designs in the Plaza Hotel (a designated New York City Landmark), and in Washington, D. C., at the Raleigh Hotel (demolished).

The owner and developer of the Martinique Hotel was William R. H. Martin, a large landowner in Manhattan at the turn of the century and a founding member of the clothing firm of Rogers, Peet & Company. Martin was born in St. Louis and lived in Brooklyn as a child. He entered the clothing business with his father John T. Martin, who had been a large army contractor during the Civil War. Later the Martins formed a wholesale clothing business with Marvin Rogers; it was known by several different names before becoming Rogers, Peet & Co. Martin served as head of the company from 1877, but had retired from active involvement several years before his death in 1912. Martin used his wealth to invest heavily in Manhattan real estate, and at the time of his death his holdings were valued at more than ten million dollars. These investments included such properties as the Marbridge Building as well as the Martinique Hotel. Martin also built and supported the Trowmart Inn, a home for working girls.

Martin clearly thought the 34th Street-Broadway area was a vital, growing section for business and investment. Rogers, Peet & Co. opened a store at 1260 Broadway in 1889, even before such big department stores as Macy’s and Saks moved to 34th Street. Martin chose to build his new hotel close to Greeley and Herald Squares because the location was beginning to offer many opportunities for shopping, theater and restaurants to attract the tourist trade, and was close to several modes of transportation.

Hardenbergh created a French Renaissance design which capitalized on the openness of Greeley Square with a boldly-scaled mansard roof, towers and ornate dormers. The façade reflects Hardenbergh’s reputation for designing buildings for long-term use, not short-term profit.  The glazed brick, terracotta-and limestone-clad structure also features stonework, balconies and prominent cartouches on all three of its main facades.

The Hotel Martinique opened on December 21, 1910 with a total of 600 rooms. It was well-located within walking distance from the newly-opened Pennsylvania Station, Macy’s on Herald Square (which opened in 1904) and the PATH commuter railroad system’s Manhattan terminus at 33rd Street (1907). Across the street from the Martinique was the Gimbels New York flagship department store.  Designed by Daniel Burnham, the structure offered 27 acres of selling space.  When this building opened in 1910, a major selling point was its many doors leading to the Herald Square subway station. Doors also opened upon a pedestrian passage under 33rd Street, connecting Penn Station to those subway stations. The idea of a Thanksgiving Day parade originated in 1920 with Gimbels Department Store in Philadelphia.  Macy’s in New York did not start its parade until 1924.

A faded old Martinique brochure from 1910 contains the following information:

The Hotel Martinique is located at the intersection of Broadway, Sixth Avenue and 32nd Street, and the plaza thus formed is termed Herald or Greeley Square….One block east is Fifth Avenue, the great residential street of New York.  Within a radius of three blocks are to be found the greatest of the city’s retail stores, making it an ideal headquarters for shoppers. The best theaters are centered in this vicinity, and the two great Opera Houses are within easy walking distance…The Gentlemen’s Broadway Café is a veritable architectural gem. The walls and columns of Italian marble give to this room a richness which is completed by Pompeiian panels of unquestioned merit.

The brochure goes on to report that the Martinique towered over all adjacent structures, “furnishing views and the degree of light seldom secured in a city hotel.  The sanitary precautions, plumbing, etc. are the most complete.” Prices for rooms, according to the brochure, were $3.50 a day for room and bath, $6.00 and up for bedroom, bath and parlor.

Near the end of the nineteenth century, the area of Broadway and West 34th Street gained prominence as an important entertainment district. By the 1860s, the most fashionable playhouses and the Academy of Music were located near Union Square. The construction of Madison Square Garden brought New York’s entertainment district up to 23rd Street, along with the fashionable shopping establishments of the Ladies Mile, hotels and restaurants. By the 1880s Broadway, between 23rd and 42nd Street became New York’s glittering “Great White Way” which was lined with theaters and elegant department stores.

Restaurants and luxurious hotels followed, serving the many visitors who flocked to this part of town. The Metropolitan Opera House, located at Broadway and 39th Street opened in 1883, and sparked a theatrical move uptown. The Casino Theater, the Manhattan Opera House, and Harrigan’s (later the Herald Square Theater) were all located nearby. In 1893, the Empire Theatre opened at Broadway and West 41st Street, sparking further development in the area of Longacre Square (later called Times Square). Saks & Co, Gimbels and R.H. Macy’s anchored the shopping at 34th Street beginning in 1901-02. Restaurants such as Rector’s and Delmonico’s satisfied the gastronomical needs of New York’s wealthy, while they stayed at such hotels as the Marlborough, the Normandie and the Vendome.

To the east, Fifth Avenue had a different tone, set by the establishment of B. Altman’s vast department store and the Gorham Silver Company, as well as the Knickerbocker Club. This was confirmed by the opening, in 1893 and 1897, of the lavish Waldorf and then the Astoria Hotels on Fifth Avenue, between 33rd and 34th Streets. One block to the west of Greeley Square, the planned Pennsylvania Station promoted much future development. Sixth Avenue and 34th Street was also the site of cross-town streetcars, the Sixth Avenue elevated, and the Hudson Tubes to New Jersey.

But when the theater district moved uptown to the Times Square area and the best stores left Sixth Avenue for Fifth Avenue, the Martinique lost business and gradually became a delinquent hotel. By 1970, the Hotel Martinique, still in private ownership, was renting rooms to New York City and the Red Cross for use as emergency housing for homeless people.  For nearly twenty years it served as one of New York’s most notorious welfare hotels.

After years of bad publicity, the city decided to empty the hotel with its dimly lit, squalid rooms and corridors and problems with lead paint and asbestos removal.  (To get the full impact of the dreadful living conditions, read “Rachel and Her Children” by Jonathan Kozol which details the crowding, lack of services and corruption which created a nightmare for family groups. When the last welfare family left the Martinique in 1989, the hotel was acquired from Season Affiliates in a 99-year lease by Harold Thurman, who owned the Hilton Hotel at JFK International Airport. It remained vacant until 1996 while Thurman renovated the hotel completely and secured a Holiday Inn franchise.

On May 5, 1998, in a move that provided reminders of its past glory, the Martinique was conferred landmark status by the New York City Landmarks Preservation Commission. Jennifer J. Raab, chairwoman of the Commission, said that they began considering landmark status out of concern that the new owner would seek to alter its exterior.

Here is a summary of the Commission’s report:

The Hotel Martinique, a major work of the prominent designer Henry J. Hardenbergh, was constructed in three phases, in 1897-98, 1901-03, and 1909-11.  Developer William R. H. Martin, who had invested heavily in real estate in this area of the city, built and expanded the hotel in response to the growth of entertainment, shopping, and transportation activities in this busy midtown section.  Martin hired the distinguished architect Henry J. Hardenbergh, who had acquired a reputation for his luxury hotel designs, including the original Waldorf and Astoria Hotels, as well as the Plaza. In his hotel and apartment house designs, Hardenbergh created picturesque compositions based on Beaux-Arts precedents, giving special care to interior planning and appointments. For the sixteen-story, French Renaissance-inspired style Hotel Martinique, the architect capitalized on the openness made possible by Greeley Square, to show off the building’s boldly-scaled mansard roof, with its towers, and ornate dormers. The glazed brick, terra cotta, and limestone-clad structure also features rusticated stonework, balconies and prominent cartouches on all three of its main facades: Broadway, 32nd Street and 33rd Street.

The hotel is now called the Martinique New York on Broadway, Curio Collection by Hilton and, against all odds, remains a stunning Beaux-Arts landmark building in the heart of midtown Manhattan just blocks away from the Empire State Building, Madison Square Garden, Penn Station, Macy’s and the Chelsea art galleries and restaurants.