Home/Nobody Asked Me, But… No. 200: Hotel History: Cesar Ritz and Auguste Escoffier 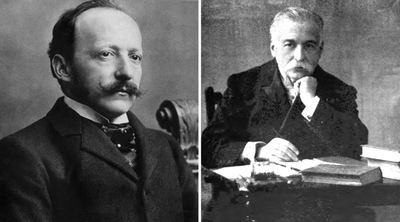 Cesar Ritz was a Swiss hotelier whose name is more synonymous with hotel luxury and fine food than Conrad Hilton, J.W. Marriott or William Waldorf Astor. Along with his chef de cuisine, Auguste Escoffier, Ritz was already well known across Europe when they were invited to run the revolutionary new Savoy Hotel in London in 1889.

The land on which the Savoy stands was bought in 1880 by the impresario Richard D’Oyly Carte to build the Savoy Theatre dedicated to presenting the Gilbert and Sullivan operettas which he produced. Impressed by the opulence of the American hotels in which he’d stayed while touring, D’Oyly Carte decided to build London’s first luxury hotel. It had electric lighting, elevators serving the 268 guestrooms and marble bathrooms with a constant supply of hot water. The hotel was designed by architect Thomas Edward Collcutt (1840-1924) who won the Grand Prix for Architecture at the Paris International Exposition in 1889.

Six months after the Savoy Hotel opened, Carte hired Cesar Ritz at an annual salary of about $200,000 with equally generous wages for the maître d’hotel Louis Echenard and the chef Auguste Escoffier. They met in 1884 when Ritz was managing a hotel in Monte Carlo. When he lost his chef to the new Hotel de Paris, Ritz hired Escoffier, one of the most celebrated chefs in Europe.

They were an odd couple and ideal partners but were opposite temperamentally. Whereas Ritz was debonair and outgoing, Escoffier was methodical and cerebral. Ritz was ambitious and extravagant while Escoffier was self-assured and precise. He organized a modern brigade system with specialist chefs working in parallel allowing for faster service. He was imperturbable, soft-spoken and wore a carefully-trimmed mustache.

Ritz realized that his success in the luxury hotel business depended in large part on having a superb restaurant in the hotel. Aside from their sharply different personalities, it turned out that Ritz and Escoffier worked very well together. They were also friends. Escoffier named some of his famous culinary creations for well-known patrons:

In keeping with the operational style of the food and beverage business in those days, both Ritz and Escoffier operated in the standard financial mode: they took kickbacks and a 5 percent commission in cash from suppliers (who made up their losses by shorting their deliveries to the Savoy). They were following the long-standing customs and practices of their trade. Ritz and D’Oyly Carte’s business plan was for the Savoy to occupy the very heart of cosmopolitan London to bring together socialites, celebrities, royalty, bohemian artists and newly-minted millionaires.

Escoffier’s cuisine was less complicated than his predecessors eliminating unnecessary ornamentation, inedible decoration and superfluous sauces. Escoffier’s motto was “above all, make it simple….” He is best known for his kitchen reforms and for his elevation of the status of cooks who were divided into parallel teams. Each one dealt with a single aspect of a dish as assigned by the chef de partie who oversaw each brigade. This technique speeded up the time needed for preparation and enabled food to be delivered hot to the tableside. Escoffier also developed the prix fixe meal with a seven-course menu for a set price.

The Savoy under Cesar Ritz’s management served a distinguished and wealthy clientele. It was able to attract respectable society women who previously did not dine in public restaurants. The hotel became such a financial success that Carte bought other luxury hotels. But then in 1897, Ritz and his partners were dismissed from the Savoy and were implicated in the disappearance of large amounts of wines and spirits and for accepting gifts from the Savoy’s suppliers.

D’Oyly Carte had no option but to fire Ritz and Escoffier with the following letter of dismissal:

“By a resolution passed this morning you have been dismissed from the service of the Hotel for, among other serious reasons, gross negligence and breaches of duty and mismanagement. I am also directed to request that you will be good enough to leave the Hotel at once.”

Ritz threatened to sue the hotel company for wrongful dismissal, but was evidently dissuaded by Escoffier, who felt that their interests would be better served by keeping the scandal quiet. It was not until 1985 that the facts became public knowledge.

By the late 1890s, Ritz was an extremely busy man with hotel projects in Madrid, Cairo, Johannesburg, Rome, Frankfurt, Palermo, Biarritz, Weisbaden, Monte Carlo, and Lucerne. According to his wife, “Cesar’s suitcases were never completely unpacked; he was always either just arriving from or departing upon a new journey.” In 1896, Ritz formed the Ritz Hotel syndicate with the South African millionaire Alfred Beit, reputedly the wealthiest man in the world. They opened what became the celebrated Hotel Ritz in the Place Vendome, Paris in 1898. He opened the Hotel Ritz in London in 1905 which became one of the most popular hotels for the rich and famous. The Ritz Hotel in Madrid opened in 1906 inspired by King Alfonso’s desire to build a luxury hotel to rival the Ritz in Paris. In each of these hotels, Ritz partnered with Auguste Escoffier until Ritz had to retire in 1907 because of deteriorating health. After a long illness, Ritz died on October 26, 1918. Despite his humble Swiss background, Cesar Ritz and his luxurious hotels became legendary and his name entered the English language as the epitome of high-class cuisine and hotel operations.

A recently published book Ritz and Escoffier: The Hotelier, the Chef, and the Rise of the Leisure Class by Luke Barr (Clarkson Potter) tells this fascinating story. Cesar Ritz gave his name to some of the world’s most luxurious hotels in Paris, Madrid, London and New York – as well as to the ninety-one hotels in the Ritz Carlton chain and to the Ritz cracker. His surname even became an adjective, “ritzy.” Ritz was known as the “king of hoteliers and hotelier to kings.”

Postscript: As I finished writing this hotel history, the following press release was issued:

“Marriott International today (July 24, 2018) announced that it had signed an agreement with luxury hospitality development firm Flag Luxury Group to bring The Ritz-Carlton brand to New York City’s vibrant NoMad neighborhood, also known as North of Madison Square Park… Designed by award-winning architect Rafael Vinoly, this landmark project will include both hotel accommodations and branded residences conceived of by renowned interior design firm Yabu Pushelberg…. True to The Ritz-Carlton brand, the tower will include refined accommodations, a fine-dining restaurant, the brand’s renowned Club Lounge, a signature Ritz-Carlton Spa and fitness center, and a chic roof top bar…. Nearby, Madison Square Park- a public space since 1686- will provide guests the opportunity to enjoy a full schedule of cultural, culinary and family events.”