Home/Nobody Asked Me, But… No. 191: Hotel History: “Buffalo Bill” Cody 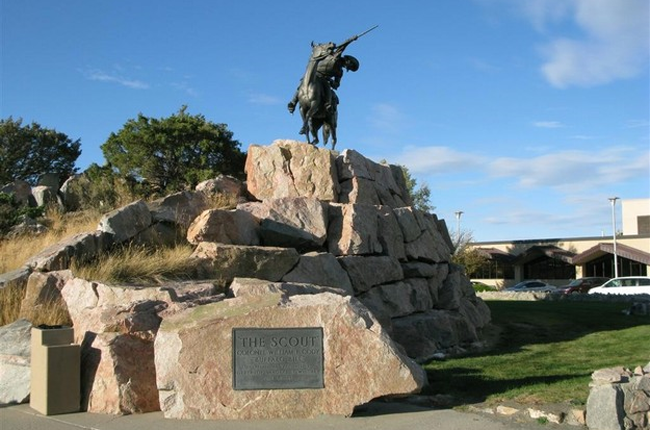 “Buffalo Bill” Cody (1846-1917) William Frederick “Buffalo Bill” Cody (1846-1917) was an American legend, bison hunter, government scout, Wild West showman, pony express rider and hotel developer. In 1902, Cody opened the Irma Hotel named after his daughter. He anticipated an increasing number of tourists coming to Cody, Wyoming on the recently-built Burlington Railway. While most Americans knew about the legendary Buffalo Bill because of his Wild West Show, he was also a promoter of tourism in the Yellowstone National Park.

After his father’s death, Bill Cody became a rider for the Pony Express at age fourteen. During the American Civil War, he served in the Union Army from 1863 to 1865. Later, he served as a civilian scout for the U.S. Army during the Indian Wars and was awarded the Medal of Honor in 1872 for gallantry.

Buffalo Bill’s legend began to spread when he was still in his twenties. Shortly thereafter, he started performing in cowboy shows that featured episodes from the frontier and Indian Wars. He founded Buffalo Bill’s Wild West in 1883, taking his large company on tours in the United States and beginning in 1887 in Great Britain and continental Europe. He toured Europe eight times through 1906. The show was enormously successful in Europe, making Cody an international celebrity and American icon. Mark Twain commented, “It is often said on the other side of the water that none of the exhibitions which we send to England are purely and distinctly American. If you will take the Wild West show over there you can remove that reproach.”

After opening the Irma Hotel in 1902, Cody completed construction of the Wapiti Inn and the Pahasca Teepee in 1905 with the assistance of artist, rancher and philanthropist Abraham Archibald Anderson. Beginning in the mid-1870s, Anderson studied art in Paris, first with Léon Bonnat, then under Alexandre Cabanel, Fernand Cormon, Auguste Rodin, and Raphaël Collin. Anderson developed a reputation for his portraits. His 1889 portrait of Thomas Alva Edison is in the National Portrait Gallery in Washington D.C.

Returning to the United States in the summers, Anderson bought land in northwestern Wyoming and developed it into the Palette Ranch. He personally designed William “Buffalo Bill” Cody’s guest ranch Pahaska Teepee, and his own home, Anderson Lodge. That lodge became the first administrative headquarters for the Yellowstone Forest Reserve in 1902, as President Roosevelt named Anderson as the first Special Superintendent of Forest Reserves. Anderson played a significant role in the preservation and development of the Yellowstone region.

These facilities were located in the 50 miles between Cody and east gate of Yellowstone Park on the Yellowstone Trail which was proclaimed as the “most scenic 50 miles in America” by President Theodore Roosevelt. The Pahaska Tepee was built between 1903 and 1905 as a hunting lodge and summer hotel and is listed on the National Historic Register. Its name was derived from the words “pahinhonska” (the Lakota’s name for Buffalo Bill) meaning “long hair of the head,” and “teepee” (lodge) resulting in “Longhair’s Lodge”. It was built after the Chicago-Burlington-Quincy Railroad spur line and government road to Cody was completed.

The Wapiti Inn was located within a day’s wagon ride from Cody and the Pahaska Teepee was within a two-day drive. Automobiles were prohibited from Yellowstone until 1915 so that the Pahaska Teepee was the last stop for vehicles entering the Park. As more automobiles were allowed to enter Yellowstone, overnight stay at the Wapiti Inn declined and the hotel was demolished. The logs were used to build a bunkhouse at the Pahaska Teepee. The main structure of the Teepee is a two-story structure measuring 83.5 feet by 60 feet. The building faces east, down the valley of the Shoshone River. The main level is surrounded by porches on the north, south and east with a main entrance centered on the eastern porch. The double doors lead into a hall that extends to the roof with a stone fireplace at the opposite end. The dining room is behind the fireplace. The hall is surrounded by mezzanine galleries. A small suite of rooms over the east porch was used by Cody. The Pahaska Teepee operates as a mountain resort and was listed on the National Register of Historic Places in 1973. It was called the “Gem of the Rockies” by Buffalo Bill.

The Irma Hotel is a landmark in Cody, Wyoming with a famous bar made of cherry-wood that was a gift to Buffalo Bill by Queen Victoria. The Irma opened with a party on November 18, 1902, which was attended by the press and dignitaries from as far away as Boston. The hotel quickly became the social center of Cody. In the meantime, Buffalo Bill was under pressure from creditors and was forced to sign over the hotel to his wife Louisa in 1913, who was at the time on bad terms with him. After Cody’s death in 1917, the hotel was foreclosed upon and sold to Barney Link. Before the end of the year Link’s estate sold the property back to Louisa, who owned it until she died in 1925. The new owners, Henry and Pearl Newell, gradually expanded the hotel, building an annex around 1930 on the west side to accommodate automobile-borne visitors. After her husband’s death in 1940, Pearl Newell operated the hotel until her own death in 1965. She left the hotel’s extensive collection of Buffalo Bill memorabilia to the Buffalo Bill Historical Center, and stipulated that proceeds from the estate be used as an endowment for the museum. The Irma Hotel is still open for business as both a hotel and restaurant. It is included on the National Register of Historic Places, listed in 1973.

The historic Wapiti Lodge is a beautifully restored property located in the heart of the Northfork Valley, overlooking the Shoshone River. Built in 1904 in place of the demolished Wapiti Inn by Ben and Mary Simpers, it was known as the Green Lantern Tourist Camp, and believed to be the first establishment to hold a license to sell beer after Prohibition was repealed. The Simpers also started the first food service in the valley, serving chicken dinner to both tourists and locals in the area. The Simpers subsequently sold to F.O. Sanzenbacker in 1931, and the name was changed to the Wapiti Lodge. The lodge evolved over the decades, from a gas station, general store, post office, and restaurant, now returning to its original offering of relaxation and recreation to area travelers. The property even served as the home of the Wapiti Post Office from 1938 until 2010. Although over 100 years old, time has been kind in preserving the lodge’s structure and grace. Today, the lodge epitomizes Wyoming’s character and charm, with a bit of the old intertwined with the comforts expected by discerning travelers.

In addition to a house and cabin, six suites are now available, all capturing the style and elegance of past and present. The Lodge boasts of modern comfort and convenience for guests with kitchenettes, phones, WIFI cable TV, continental breakfast, gathering areas, and a gameroom for kids and adults alike. The spectacular scenery surrounding the lodge is an extra bonus along with fishing on the private stretch of the Shoshone River.

As a frontier scout, Cody respected Native Americans and supported their civil rights. He employed many of them with good pay and a chance to improve their lives. He once said that “every Indian outbreak that I have ever known has resulted from broken promises and broken treaties by the government.” Cody also supported the rights of women. He said, “What we want to do is give women even more liberty than they have. Let them do any kind of work they see fit, and if they do it as well as men, give them the same pay.” In his shows, the Indians were usually depicted attacking stagecoaches and wagon trains and were driven off by cowboys and soldiers. Many family members traveled with the men, and Cody encouraged the wives and children of his Native American performers to set up camp – as they would in their homelands – as part of the show. He wanted the paying public to see the human side of the “fierce warriors” and see that they had families like any others and had their own distinct cultures. Cody was also known as a conservationist who spoke out against hide-hunting and advocated the establishment of a hunting season.

The Buffalo Bill Center of the West is a large and modern facility located near the center of Cody. It contains five museums in one, including the Draper Natural History Museum, the Plains Indian Museum, the Cody Firearms Museum, the Whitney Western Art Museum and the Buffalo Bill Museum which chronicles the life of William F. Cody, for whom the center is named. The historical center is a favorite stopping point for tourists passing through the town on their way to or from Yellowstone. Old Trail Town, a restoration of more than twenty-five historic Western buildings and artifacts is located in Cody just off the Yellowstone Highway. Rodeo is important in the culture of Cody which calls itself the “Rodeo Capital of the World”. The Cody Nite Rodeo is an amateur rodeo held every night from June 1 through August 31. Cody is also host to the Cody Stampede Rodeo, one of the largest rodeo in the nation sponsored by the Professional Rodeo Cowboys Association which has been held from July 14 every year since 1919.