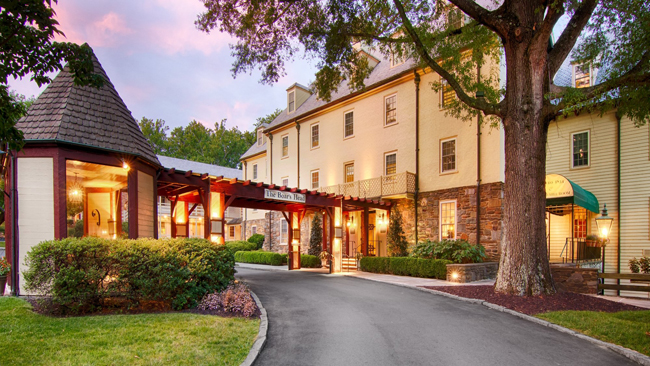 On August 13, 2017, the New York Times wrote in “A Guide to the Charlottesville Aftermath”:

“On Saturday afternoon, President Trump met criticism for condemning the “egregious display of hatred, bigotry and violence on many sides” without singling out white nationalists or neo-Nazis”.

My hotel research about the 183-year old Boar’s Head Inn in Charlottesville reveals its relationship to the Boar's Head in London which has been synonymous with warm hospitality and good food since Shakespeare’s day. In the 1730s, the Inn was the site of Terrell's Ordinary where travelers spent the night. In 1965, the epicurean heart of The Boar's Head was built from the timbers of an abandoned gristmill along the banks of the Hardware River, which dated back to 1834. The relocation of the mill was an opportunity to preserve and transform a treasured Virginia artifact. It had survived because of the orders of Generals Grant and Custer during their march through Charlottesville in the Civil War. Indeed, it had continued to operate some 60 years after the war's end. For 26 years running, the Old Mill Room has earned AAA's Four-Diamond designation in recognition of its culinary artistry, distinctive Virginia ambiance and superior service. The Inn was purchased in 1988 by the University of Virginia Foundation with many renovations and upgrading.

Charlottesville is known chiefly as the home of Thomas Jefferson and the University of Virginia, which he founded. But the area's softly rolling hills in the shadow of the Blue Ridge Mountains were home also to other men who shaped the early United States. Presidents Madison and Monroe lived nearby. Albemarle County, in which Charlottesville lies, was settled by pioneers who left the security of Virginia's eastern shore in the 18th century. Their enterprising spirit was epitomized in the 19th century by native son Meriwether Lewis, Jefferson's personal secretary who undertook with William Clark to find the Northwest Passage. The early tobacco plantations around Charlottesville vanished long ago, but the rural life-style remains. Even today the landscape is one of rustic beauty, of cattle and horses farms, of stately mansions, of historic markets and of small country stores. The area around Charlottesville is particularly beautiful in the spring when the vast apple and peach orchards are in bloom, the dogwoods and magnolias flower and the smell of honeysuckle is in the air.

The Boar's Head Inn was ranked as one of "America's Top College Hotels" by Travel and Leisure Magazine in its June 2012 issue. "Whether independent B&Bs or historic resorts, the top college hotels deliver much more than proximity… These hotels often embrace the personality of their local institutions and provide an exceptionally adult, dignified experience," wrote Jason Cochran in the June 2012 article.

The Inn has received increased acclaim since completing a major renovation of all of its guestrooms in March 2012, with a warm, residential feeling of the spaces, the mix of antique and modern furnishings, and fresh color schemes. Special attention was given to the artwork: vintage photos and memorabilia reflect the connection with the University, Thomas Jefferson and the rich history of the area.

A one-hour drive from Richmond and two-hour drive from Washington, D.C., Tidewater and Roanoke, the Boar's Head offers Four-Diamond dining, a state-of-the-art sports and fitness facility, award-winning tennis, squash, championship golf, shopping, hot-air ballooning, a luxury spa, children's programs, 22,000 square feet of function space and close proximity to attractions such as Monticello, the Blue Ridge Mountains and numerous wineries. The Boar's Head is owned and operated by the University of Virginia Foundation.

Frommer's Review Standing beside a picturesque lake and named for the traditional symbol of hospitality in Shakespeare's England, this university-owned property is one of the better all-around resorts in Virginia. The focal point is a 19th century gristmill that was dismantled and brought here in the early 1960s. The place is loaded with antiques and art, and its plank flooring and huge old ceiling beams give ancient charm to the Old Mill Room, the resort's signature restaurant offering fine dining accompanied by an excellent selection of Virginia wines.

*excerpted from “Built To Last: 100+ Year-Old Hotels East of the Mississippi” AuthorHouse 2011

“Built To Last: 100+ Year-Old Hotels West of the Mississippi” is available in hardback, paperback and Ebook format.