Nobody Asked Me, But… No. 187: Hotel History: Hotel Galvez & Spa, Galveston, Texas

Nobody Asked Me, But… No. 187: Hotel History: Hotel Galvez & Spa, Galveston, Texas 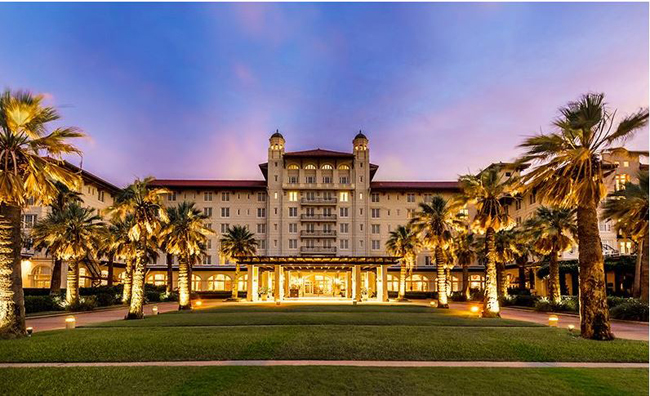 The Hotel Galvez opened on June 10, 1911, a little more than a decade after Galveston was decimated by the great hurricane of 1900 which claimed more than 6,000 lives. The Hotel Galvez was named after Bernardo de Galvez, the Spanish Colonial Governor who first chartered the Texas Gulf Coast and for whom the city of Galveston was also named. A year after it opened, the Hotel Monthly newsletter billed the Galvez as one of the “best arranged and most richly furnished seaside hotels in America.” It was known as the “Queen of the Gulf” and “The Playground of the Southwest.”

The hotel was designed by Mauran, Russell & Crowell of St. Louis, Missouri with a combination of Mission Revival and Spanish Revival styles. John Lawrence Mauran was a well-known American architect responsible for many downtown landmarks in Missouri, Wisconsin and Texas. From 1902, Mauran became a Fellow of the American Institute of Architects and was appointed by President Theodore Roosevelt to the first United States Commission of Fine Arts in 1910. In 1915, he was elected President of the American Institute of Architects.

While it is only 45 miles from Galveston to Houston, it might as well be on another continent. The causeway across Galveston Bay leads to the narrow 32-mile-long barrier island with 19th century Gothic, Victorian and Greek Revival hotels and private developments such as the Strand, Bishop’s Palace, the Ashton Villa and the Hotel Galvez. More than 500 buildings are listed on the National Register of Historic Places.

As Robert Reinhold of the New York Times wrote on October 31, 1982:

“A thumbnail history will help to understand the new-old Galveston. The city was founded in 1836 and, with its natural deep-water harbor, soon became the commercial gateway to the growing Texas region, serving the cotton, slave and other trades. But its civic-minded leaders, many of them German Jewish merchants whose descendants are still influential, also turned Galveston into a cultural and architectural showplace without equal West of New York. By the turn of the century, when people were still shooting each other in most other parts of Texas, Galveston had an opera house, a medical school and the first electric lights and the first country club and golf course in Texas.

The city, with its proximity to the oil and gas fields, might well have become the New York of the West. But then, on Sept. 12, 1900, a hurricane of a force never since equaled practically destroyed the city, killing more than 6,000 persons. A 17-foot seawall was built to prevent a repetition of the damage, but Galveston was never the same, particularly after the Houston Ship Channel was dug in 1917, bypassing the port.”

Galveston was once the grandest city in Texas as can be seen in “The Galveston That Was” by photographers Henri Cartier-Bresson and Ezra Stoller. Galveston seems reminiscent of New Orleans – not only aesthetically, but culturally as well.

After a fire destroyed the Beach Hotel on Galveston Island in 1898, some of the wealthiest Galvestonians planned and built a spectacular new hotel. The result was the huge and handsome Hotel Galvez facing the Gulf of Mexico. It didn’t take long for the hotel to become one of the most popular in the United States with a guest list that includes Presidents Franklin Roosevelt, Dwight Eisenhower and Lyndon Johnson as well as Frank Sinatra, Dean Martin and Howard Hughes. In 1942, the U.S. Coast Guard made the hotel its headquarters during World War II.

The Hotel Galvez was restored after the war and featured illegal gambling in the 1940s and 1950s until gambling was outlawed in the mid-1950s. In 1971, the hotel was acquired by Harvey O. McCarthy and Dr. Leon Bromberg and then by Denton Cooley in 1978. In 1989, the Galvez became a Marriott franchise. The hotel was purchased in 1995 by Galveston real estate developer George P. Mitchell who restored its original 1911 look. During Hurricane Ike in 2008, the hotel lost clay tiles from its roof and was flooded on its lower level where the spa, health club, business offices and laundry were located.

The Hotel Galvez is rated by AAA as a Four-Diamond hotel. It is a member of Historic Hotels of America, the official program of the National Trust for Historic Preservation.

*excerpted from “Built To Last: 100+ Year-Old Hotels West of the Mississippi”