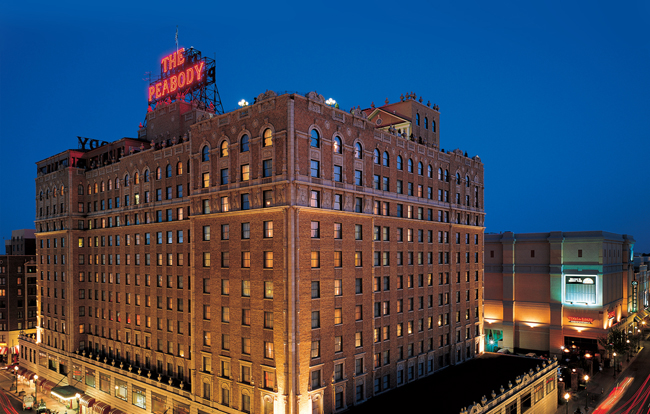 Following the Civil War, Memphis began the process of rebuilding. In 1869, Colonel Robert C. Brinkley opened a 75-room hotel which contained private baths, ballroom, saloon and lobby. Brinkley planned to name the hotel after himself but when he learned that his dear friend, philanthropist George Peabody, had died, he christened it The Peabody. Its lobby was soon filled with Memphis business and society leaders as well as plantation owners and riverboat gamblers. Presidents Andrew Johnson and William McKinley, Confederate Generals Robert E. Lee, Nathan Bedford Forrest and Jubal Early were guests. Jefferson Davis, the former president of the Confederacy, lived there in 1870 when he was president of a Memphis-based insurance company. After 57 years, the original Peabody was demolished to make way for a department store. It was replaced in 1926 by a new 12-story Peabody with elegant public rooms, ornate hand-painted beamed ceilings and duplex townhouse suites. It was built on the site of the Fransioli Hotel and was designed by the famous Chicago architect Walter W. Ahlschlager. He also designed the Roxy Theatre and the Beacon Hotel and Theater in New York; the Sheridan Plaza and Sovereign Hotels in Chicago; the Carew Tower in Cincinnati, the Medinah Athletic Club in Chicago, etc.

The Mississippi Delta begins in the lobby of the Peabody and ends on Catfish Row in Vicksburg. The Peabody is the Paris Ritz, the Cairo Shepheard's, the London Savoy of this section. If you stand near its fountain in the middle of the lobby, where ducks waddle and turtles drowse, ultimately you will see everybody who is anybody in the Delta.

In 1932, general manager Frank Schutt and friend Chip Barwick returned from a hunting trip and decided to let their live duck decoys take a swim in the hotel's lobby fountain. This led to the creation of the March of the Peabody Ducks, a cherished Memphis tradition and an extraordinary public relations benefit to the Peabody. The world-famous March takes place daily at 11AM and 5PM with great fanfare. The guests love the idea and, since then, five Mallard ducks (one drake and four hens) have played in the fountain every day. Over the years, the Peabody Ducks have gained celebrity status with television appearances on the Tonight Show starring Johnny Carson, the Oprah Winfrey Show and Sesame Street. The custom of keeping ducks in the lobby fountain may date back even further than the 1930s. A pre-1915 postcard shows ducks playing in the fountain.

In 1940, bellman Edward Pembroke volunteered to care for the ducks. Pembroke was given the position of “Duckmaster” and served in that position until 1991. As a former circus animal trainer, he taught the ducks to march into the hotel lobby, which started the famous Peabody Duck March. Every day at 11AM, the Peabody Ducks are escorted from their penthouse home, on the Plantation Roof, to the lobby via elevator. The ducks, accompanied by the King Cotton March by John Philip Sousa, then proceed across a red carpet to the hotel fountain, made of a solid block of Italian travertine marble. The ducks are then ceremoniously led back to their penthouse at 5 PM.

In the 1950s, the Peabody suffered as a casualty of the declining fortunes of downtown Memphis. The Sheraton Corporation tried to revive the hotel in 1968 as the Sheraton-Peabody Hotel, the same year that Martin Luther King Jr. was shot to death while standing on the balcony of a small motel less than a mile south of the Peabody. His assassination and the subsequent riots accelerated the flight of white families and businesses. The hotel struggled to stay open for another seven years before it declared bankruptcy and closed in 1975. The property was bought at a foreclosure sale by the Belz family who spent upwards of $25 million to renovate and restore the hotel. The grand reopening of the Peabody in 1981 was credited as the inspiration for the downtown revitalization of Memphis that followed. The Peabody's success has been the catalyst in the redevelopment of other downtown properties including two nearby hotels.

The Skyway Room on the Peabody roof was refurbished and, with the adjoining open-air Plantation Roof, are the scene of pop and rock concerts. In the 1930s and 40s, Benny Goodman, Harry James, the Andrews Sisters and Tommy Dorsey performed here. The Peabody was placed on the National Register of Historic Places in 1977 and is a member of Historic Hotels of America.

*excerpted from “Built To Last: 100+ Year-Old Hotels East of the Mississippi” AuthorHouse 2011