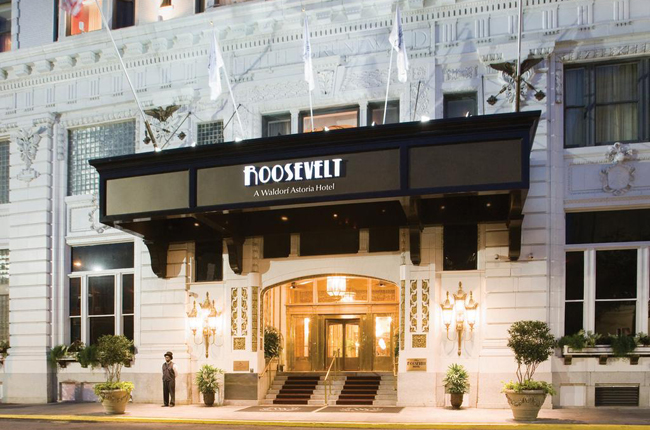 The original Roosevelt New Orleans Hotel was built by Louis Grunewald, a German immigrant, as the Grunewald Hotel. In 1908, it was expanded with a fourteen-story 400-room annex. The expansion was designed by the Milwaukee architectural firm, H.C. Koch & Sons who also designed the Pfister Hotel and the City Hall in Milwaukee. The Grunewald was the site of The Cave, one of America's first nightclubs. The subterranean supper club came with waterfalls, stalagmites, stalactites and a line of chorus girls dancing to a Dixieland jazz band. The Cave remained in operation until 1930 and was replaced by the popular Blue Room in 1935. The Grunewald family ran the hotel until 1923 when it was purchased by a group of New Orleans investors headed by Joseph, Felix and Luca Vacarro, who renamed it the Roosevelt in honor of former president Theodore Roosevelt. Eventually, it was purchased by Seymour Weiss who started his career as the barber shop manager. After a series of promotions he managed and then owned it for more than thirty years. Weiss was a confidant of U.S. Senator and Governor of Louisiana Huey Long who used the hotel as a home-away-from-home with a suite on the 12th floor. Long intended to challenge President Franklin Roosevelt in 1935 for the Democratic Party nomination for the presidency but he was assassinated in Baton Rouge. On December 31, 1935, the Blue Room became the premier live music venue in New Orleans featuring Glenn Miller, Tommy Dorsey, Sammy Kaye and Guy Lombardo. In 1949, Weiss purchased the rights to use the name “Sazerac Bar” from Sazerac Company. He renovated a storefront on Baronne Street and opened the Sazerac Bar on September 26, 1949. Weiss then abolished the previous ‘men-only’ house rule and admitted women with great success.

The Roosevelt was acquired by Benjamin and Richard Swig in 1965 who changed its name to Fairmont Roosevelt and later Fairmont New Orleans.

The Fairmont New Orleans was severely damaged in 2005 by Hurricane Katrina and was closed for more than four years. In 2007, Sam Friedman of the Dimension Development Company of Natchitoches, Louisiana, acquired the hotel and commenced a $170 million restoration as part of Hilton's Waldorf-Astoria Collection.

The Roosevelt was supposedly the inspiration for Arthur Hailey's 1965 novel "Hotel". It is the story of an independent New Orleans hotel, the St. Gregory, and its owner's struggle to regain profitability and avoid being acquired by a large national chain of hotels. The novel was adapted into a movie in 1969 and into a television series in 1983 by Aaron Spelling. In the novel, the owner reflects about the St. Gregory Hotel:

“He had seen it grow from insignificance to prominence, from a modest initial building to a towering edifice occupying most of a city block. The hotel's reputation, too, had for many years been high, its name ranking nationally with traditional hostelries like the Biltmore, or Chicago's Palmer House or the St. Francis in San Francisco.”

At one point, the General Manager reports to the owner about the possibility of overbooking: "I talked with the Roosevelt (Hotel). If we're in a jam tonight they can help us out with maybe thirty rooms. The knowledge, he thought, was reassuring, an ace-in-the-hole, though not to be used unless essential. Even fiercely competitive hotels aided each other in that kind of crisis, never knowing when the roles would be reversed."

“There are celebrities, and then there are movie stars. The Roosevelt is a movie star of a hotel: grand, glam, confident, memorable. You don't just enter the gilded, block-long lobby–you arrive. The former Fairmont reopened under the Waldorf Astoria banner in 2009, following a $170-million renovation that updated everything down to the legacy.”

“Built To Last: 100+ Year-Old Hotels West of the Mississippi” is being printed and will be available later in June 2017.