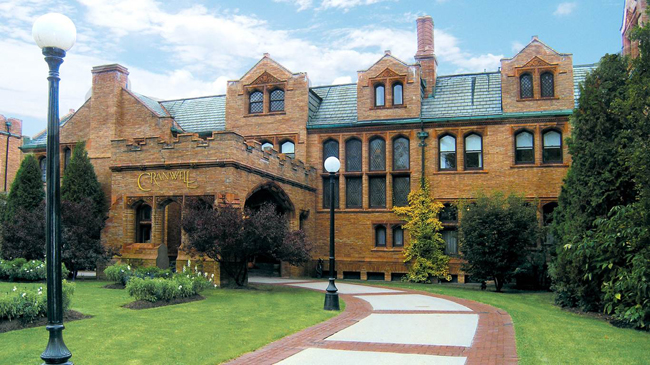 As you stroll about the grounds of Cranwell Resort, you are walking through history. Over the years, Cranwell has served as a home to wealthy industrialists, clergy, writers, students, golfers, and culture lovers in Massachusetts. The centerpiece of the property, with its extraordinary views of the Berkshires, is the hilltop Tudor-style Mansion, which has dominated the countryside for more than a century. The history of Cranwell is entwined with many stories of the opulent period between 1880 and 1920 that is known as the Gilded Age.

In 1853, the Reverend Henry Ward Beecher purchased Blossom Hill, where the Cranwell Mansion now stands, for $4,500. He loved the views from the top of the hillside and it is from this vantage point that he proclaimed, "From here I can see the very hills of Heaven". These are the views that can be seen today when you sit on the Rose Terrace at dusk where legendary parties took place some 100 years ago. The Reverend Beecher was active in the women's suffrage and the anti-slavery movements. He had presidential aspirations which were ended by a scandalous affair, and so, it was left for his sister Harriet Beecher Stowe to claim fame through her best-selling anti-slavery novel, Uncle Tom's Cabin.

General John F. Rathbone purchased the property from Beecher in 1869 and began construction by moving Beecher's farmhouse to the side of the hill so his new home would have the commanding view of the countryside. The home he built, Wyndhurst, was enormous by any standards of the day and it was set on 380 acres. At the same time, on the backside of the hill, another family was building yet another "cottage." United States Naval Captain John S. Barnes, Flag Officer of the North Atlantic Fleet during the Civil War, purchased the land for $10,000 in 1882 and erected Coldbrooke now known as Beecher's Cottage and part of the Cranwell property.

John Sloane, a relative of the Vanderbilts and co-owner of the famous furniture firm, W & J Sloane, became the next owner of the property when he built his cottage in 1894. After tearing down Rathbone's Wyndhurst and Beecher's farmhouse, Sloane constructed another Wyndhurst, which rivaled the enormity and elegance of the first. He also commissioned Frederick Law Olmsted, the famous landscape architect who created New York's Central Park to design the grounds.

After Sloane's daughter Evelyn sold the estate to a group of Florida developers in 1925, the property was briefly run as the Berkshire Hunt and Country Club. Edward Cranwell then purchased it in 1930 and later deeded the estate to the Society of Jesus of New England in 1939, to be turned into a private school for boys named after the generous benefactor. After operating for many years, the school slipped into decline, closing its doors in 1975.

Today Cranwell, with much of its original grandeur restored, thrives as a premier four-season resort. The resort offers 114 deluxe rooms situated in various buildings: Founder's Cottage, Olmstead Manor, Beecher's Cottage (formerly Coldbrooke), and the Mansion (formerly Wyndhurst). Cranwell is also home to the world-class Spa at Cranwell, one of the largest spas in the Northeast. Cranwell's 18-hole championship golf course is the original designed by Stiles and Van Cleek. In the winter, snow turns the course into a cross-country skier's paradise. Exquisite cuisine is served in Cranwell's award-winning Wyndhurst and the Music Room, while casual fare can be found in Sloane's Tavern year-round. Each year, even as companies from around the world gather here to meet, Cranwell plays host to storybook weddings of all proportions.

Cranwell Resort is a member of the prestigious Historic Hotels of America, an official program of the National Trust for Historic Preservation. To be selected for this program, a hotel must be at least 50 years old, listed in or eligible for the National Register of Historic Places and recognized locally as having historic significance.

"Nostalgia for the city's caravansaries will be kindled by Stanley Turkel's Hotel Mavens: Lucius M. Boomer, George C. Boldt and Oscar of the Waldorf". The fact-filled book by Mr. Turkel, an industry consultant, explains, among other things, the history of the hyphen (recently excised) in the name of the Waldorf Astoria, which inspired a mid-block street and even a song."

Stanley Turkel was designated as the 2015 and the 2014 Historian of the Year by Historic Hotels of America, the official program of the National Trust for Historic Preservation. This award is presented to an individual for making a unique contribution in the research and presentation of hotel history and whose work has encouraged a wide discussion and a greater understanding and enthusiasm for American History.

The author, Stanley Turkel is a great story teller…. This book is about risk takers, dreamers, inventors, entrepreneurs, innovators, visionaries, leaders and motivators. This is a collection of stories about hotel pioneers with a passion for inventing new ways to create demand for their product.”