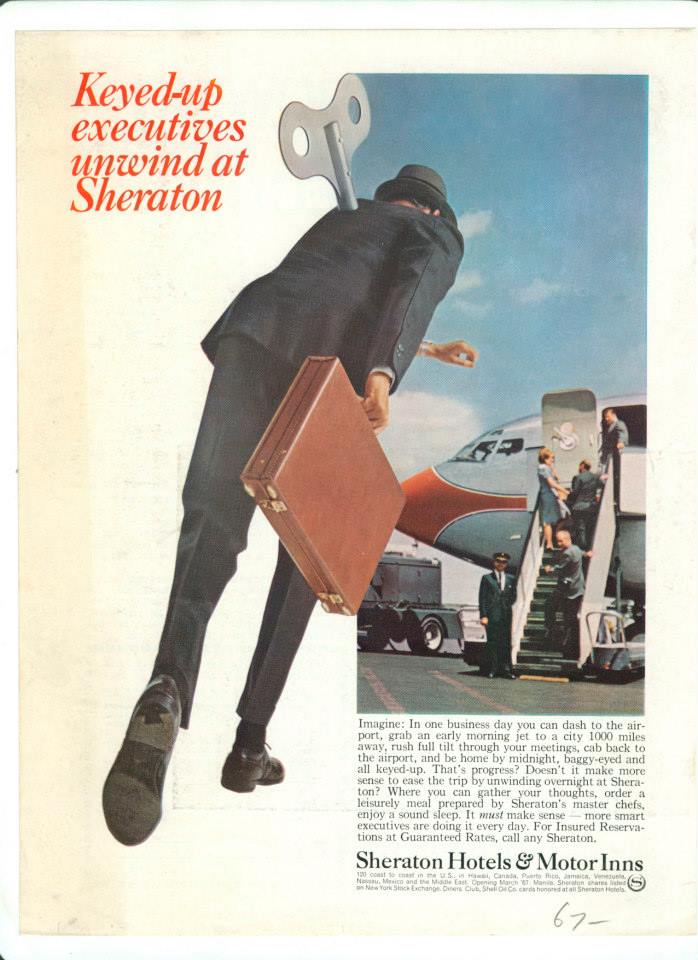 In 1965, the Sheraton Corporation of America, under the leadership of President Ernest Henderson, created a brilliant advertising campaign: “Keyed-up Executives Unwind at Sheraton”. It was broadly promoted all over the U.S. in print media, TV advertising and locally by individual Sheraton Hotels. Among my collection of Sheraton artifacts is a translucent plexiglass paperweight which has a small figure of a businessman with a wind-up key in his back which says “Keyed-Up Executives Unwind at Sheraton”.

His picture was everywhere: on television, on posters, in airports and railroad stations, on leaflets, matchbooks, cocktail stirrers, in newspaper ads. He was an inspired creation of Madison Avenue– a fictional character with whom millions could subconsciously identify. Young and clean-cut, he carried an attached case, glanced at his watch and looked like a businessman scurrying to his next appointment. He had, however, an enormous protuberance on his back. For sticking out from between his shoulder blades was a great, butterfly-shaped key of the type used to wind up mechanical toys. The text that accompanied his picture urged keyed-up executives to “unwind” and slow down at Sheraton hotels. This wound-up man-on-the-go was, and apparently still is, a potent symbol of millions who feel just as driven and harried as if they, too, had a huge key in their back.

A typical Sheraton printed ad of that time read:

“Next time you’re on the road, all keyed-up from “turnpike tension”, ease up to a Sheraton Motor Inn. Then unwind. Enjoy a great meal, a quiet air-conditioned room, TV, swimming pool. Plus many other Sheraton extra values such as Free Parking (anyplace, anytime) and Family Plan (children share your room free). Call us for Insured Reservations at Guaranteed Rates. Keyed-Up Executives unwind at Sheraton.”

The campaign was eye-catching, clever, humorous and effective. It continued as Sheraton’s brand identification until 1968 when the International Telegraph & Telephone acquired the Sheraton Corporation of America. Soon thereafter, I was hired by IT&T and became the worldwide Product Line Manager for Hotel & Motel Operations to help oversee the management and expansion of Sheraton.

In 1968, after IT&T acquired the Sheraton Corporation of America, Sheraton needed a new advertising program after the highly-successful “Keyed-up Executives Unwind at Sheraton” campaign. In the spring of 1969, IT&T President Harold Geneen was touring the Sheraton Boston Hotel when the Sheraton Director of Marketing William Morton began to describe the Sheraton new Reservation system. Geneen thought that IT&T could be the first to create a national single 800 number watts line to replace the 200 phone numbers that Sheraton listed nationwide. With the help of IT&T’s expert telephone technicians, the new system was created and implemented. Perhaps the greatest problem facing Sheraton was picking one unforgettable number. With the advice of telephone company psychologists, Morton settled on the number 800-325-3535. Why? Because it was easy to dial. When area codes were introduced to speed the calling of long-distance numbers, telephones had rotary dials. The nearest digit to the dialing stopper, and thus the digit that could be dialed the quickest was 1. Next came 2 and then 3. The psychologist selected 2, 3 and 5 because they were quick to dial and in a sequence that was easy to remember.

By the winter of 1970, the new 800 number was on-line and the new advertising campaign broke with saturation TV, full-page magazine ads and steady repetition of “eight, oh, oh, three-two-five, three-five, three-five.” The number was set to a catchy tune created by BBD&O which was recorded by the Boston Pops. A singing dog performed it on Johnny Carson’s TV show, it was cocktail-lounge background music in a TV drama and it was played at skating rinks. The reservations flowed into the Sheraton Reservation Centers in ever-increasing numbers, breaking records every month.

At one of ITT’s General Managers Meetings in New York where 80 executives gathered monthly to report on the performance of ITTs many companies, I reported about the extraordinary success of the ever-increasing number of reservations pouring into the Sheraton central Reservation offices. ITT President Harold Geneen responded, “I don’t think that anyone will remember that number. I can’t ever remember it. “I replied, Mr. Geneen, How many secretaries do you have?” “Nine.” “When was the last time you made a hotel reservation for yourself?” “I can’t recall”. I replied “No wonder you can’t remember 800-325-3535. You never use it yourself. Thank goodness, the rest of the business world needs to call it themselves and therefore remembers 800-325-3535.” The GMM attendees cracked up and gave me an ovation.

If you wonder how such an exchange could take place without losing my job, don’t forget that I was the Product Line Manager for Hotel Operations, an invention of Geneen. The concept was brilliant in several ways. Since PLM’s had no P&L responsibility, we could not issue orders to the line. Nevertheless, we were empowered to go anywhere, look at everything, speak to anyone and provide answers and opportunities. We relayed our recommendations to the President’s office where Harold Geneen would review them. One thing you learned fast was that he hated “Yes-Men”. He thrived on cheerful conflict.