Nobody Asked Me, But… No. 247: Hotel History: Driskill Hotel, Austin, Texas

Nobody Asked Me, But… No. 247: Hotel History: Driskill Hotel, Austin, Texas 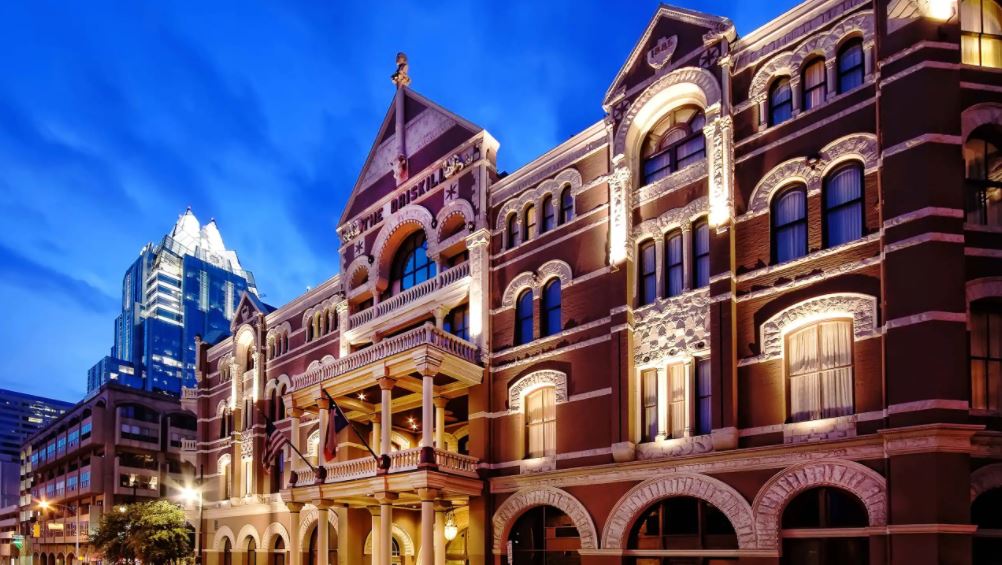 The Driskill, a Romanesque-style building completed in 1886, is the oldest operating hotel in Austin, Texas, and one of the best-known hotels in Texas. The Driskill was conceived and built by Col. Jesse Driskill, a cattleman who spent his fortune constructing “the finest hotel south of St. Louis”. Flush with cash from his service to the Confederate Army to which he supplied beef throughout the Civil War. In 1884, Driscoll purchased land in downtown Austin for $7500 and announced plans for a new hotel. Today, the Driskill remains one of the premier hotels in Austin, featuring lavish bridal suites, two restaurants, and a grand ballroom.

Cattle baron Jesse Driskill opened the hotel in 1886 in what was then a frontier town. He lost it two years later when his fortune went kaput after his herd died during a severe drought and a freeze.

The Driskill is composed of two interconnected buildings; the original four-story Romanesque Revival building constructed in 1886, and a 13-story annex constructed in 1930.

The original building, designed by local Austin architect Jasper N. Preston, was constructed with over six million pressed bricks and white limestone accents. The building contains two porticos on the southern and eastern facades, which contain large Richardsonian-style arches that were reputed to be the largest in Texas. The façade contains three limestone busts of Driskill and his sons; J.W. “Bud” Driskill facing Brazos Street, A. W. “Tobe” Driskill facing an alley on the west side, and Jesse Driskill facing Sixth Street, whose bust is surrounded by decorative carvings including longhorns on the gable ends.

The hotel opened with 60 rooms including 12 corner rooms with attached baths, a rare feature in hotels of the region at the time. At the center of the hotel was a four-story open rotunda capped by a domed skylight, which functioned as a flue to suck up the hot air and cool the building; the skylight was removed when air conditioning was installed on the roof in 1950. The building was designed for separate entrances for men and women. Two entrances, one on Sixth Street and another facing the alleyway on the west side the building, were reserved for men and were flanked by a saloon, billiard room cigar shop, a newsstand and a barbershop featuring baths. The women’s entrance on Brazos Street allowed female guests to proceed directly to their rooms, thereby avoiding the cigar smoke and rough talk of the cattlemen in the lobby. The second floor contained the main dining room and ballroom, separate parlors for men and women, a children’s dining room, and bridal suites. Other embellishments included an electric bell system, marble bureaus, steam heating, and gas lighting.

The 13-story annex, designed by the El Paso architecture firm Trost & Trost, opened in 1930. The 180-room annex contains a bungalow penthouse that is only accessible from the building’s roof. The bungalow contains two bedrooms with private baths, a living room, and a full kitchen. The bungalow was originally used as a private residence by superintendents of the Southern Pacific Railroad, but was later rented to high-profile guests including Jack Dempsey, Bob Hope, and President Lyndon Johnson. In 1979, the hotel manager restored the bungalow to use as his private residence.

In 1934, a young Texas congressional aide named Lyndon B. Johnson met Claudia Alta Taylor for their first date: a breakfast at the Driskill Dining Room. He was so enamored that he proposed marriage that very day. He and Lady Bird continued to have a strong relationship with the hotel, even watching election returns for his vice presidential and presidential campaigns. And today guests can stay in a room named after him.

The hotel held a grand opening on December 20, 1886, and was featured in a special edition of the Austin Daily Statesman. On January 1, 1887, Governor Sul Ross held his inaugural ball in its ballroom, beginning a tradition for every Texas governor since. In May 1887, less than a year after it opened, Driskill was forced to close the hotel, as he could no longer afford to operate the hotel following a harsh winter and drought that killed his cattle inventory. In addition, S.E. McIlhenny, the hotel’s general manager, and half of the staff were hired by the Beach Hotel in Galveston, which expedited the closure. Driskill sold the hotel in 1888 to his brother-in-law, Jim “Doc” Day, who reopened the hotel late in 1888.

Austin magnate George Littlefield, responsible for other Austin landmark’s opened the Austin National Bank on the southeast corner of the building; the old bank vault still remains. Littlefield later purchased the hotel for $106,000 in 1895 and vowed that it would never close again. Littlefield invested over $60,000 in renovations, including ceiling frescoes, electric lighting, steam heating, and 28 additional lavatories, but still sold the hotel at a loss of $25,000 in 1903 to banking competitor, Wilmot. Wilmot added a barbershop and women’s spa featuring Turkish baths, oversaw the construction of the annex, and adorned the former smoking room with eight antique Austrian gold leaf-framed mirrors previously owned by Maximilian and Carlota of Mexico.

In 1950, the hotel embarked on a renovation, which closed off the Sixth Street entrance and removed the rotunda’s skylight to make way for air conditioning units on the roof. In 1952, the former Austin National Bank was transformed into a television studio for KTBC, the very first television station in Central Texas.

In 1969, the Driskill closed its guest rooms in anticipation of a renovation and new tower containing a modern glass façade, which never materialized. Most of its furnishings were sold, and an American-Statesman article declared, “Driskill Hotel’s Fate ‘Sealed’.” The hotel was saved from the wrecking ball at almost the last minute, however, when a nonprofit organization called the Driskill Hotel Corporation raised $900,000.

In 1908, the Daughters of the Republic of Texas met at the Driskill hotel to discuss the fate of the Alamo Mission in San Antonio. At the meeting, a divide between two factions of the group erupted over whether to demolish or preserve the structure.

Braniff International Hotels, Inc., a division of Braniff Airways, Inc., of Dallas, Texas, bought the hotel in 1972 and began a $350,000 restoration of the grand lobby of the historic facility. Braniff reopened the hotel to customers on January 15, 1973, to very strong bookings and conference business. Braniff threw an official grand reopening celebration on February 10, 1973. Over 1000 guests attended the gala event that included a parade of every Texas Governor and/or their descendants, since 1886. All proceeds from the event went to the Austin Heritage Society, who was strategically instrumental in the resurrection of the Hotel Driskill.

In 1995, The Driskill was purchased by Great American Life Insurance, who embarked on a $30 million renovation to restore the hotel to its original appearance, which had been heavily modified over the years. The hotel closed for four years for renovation work and was re-opened in a Millennium celebration on December 31, 1999.

In 2013, The Driskill was purchased by Hyatt Hotels Corporation for $85 million, who embarked on an $8 million renovation of the hotel which was listed in the National Register of Historic Places on November 25, 1969.