Nobody Asked Me, But… No. 244: Hotel History: Wormley Hotel

Home/Nobody Asked Me, But… No. 244: Hotel History: Wormley Hotel

Nobody Asked Me, But… No. 244: Hotel History: Wormley Hotel 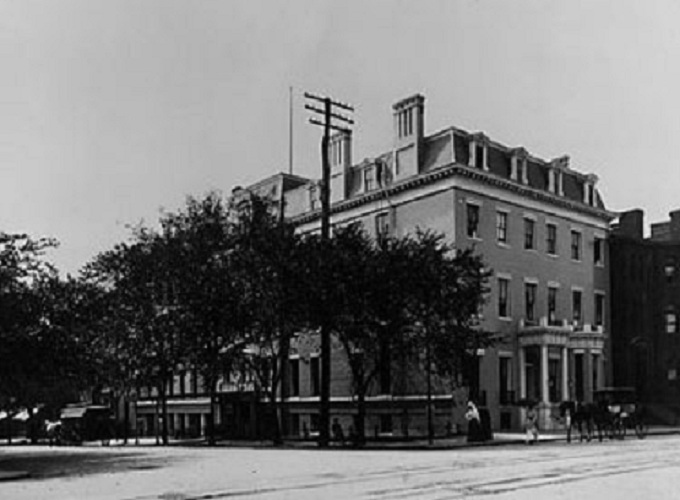 James Wormley, a pioneering Black nineteenth-century businessman opened the first integrated hotel in Washington, D.C..  He was also known for his business acumen and lobbying efforts to secure adequate funding for the first Washington, D.C. public schools for black Americans.

Wormley was born to Pere Leigh and Mary Wormley. Both parents had lived as free people and servants with a wealthy Virginia family prior to moving to Washington, D.C. in 1814. On January 16, 1819, while living in a small, two-room, brick building located on E Street, near Fourteenth Street, northwest, James was born. His father owned and managed a hackney carriage business, which he purchased for $175. Being located in the hotel section of Washington on Pennsylvania Avenue allowed his business to flourish. James, the eldest of five children, acquired his first job there. James began driving his own hack, learned skills and values, and won the confidence and trust of his patrons, which allowed him to monopolize the trade of the capital’s two leading hotels, the National and Willard. Many of his patrons, some of the most wealthy and influential citizens of Washington, became lifelong mentors and benefactors.

In 1841, Wormley married Anna Thompson of Norfolk, Virginia. From this union three sons and a daughter were born: William H. A., James Thompson, Garret Smith, and Anna M. Cole. His second son, James Thompson, became the first graduate of the School of Pharmacy at Howard University. In 1849, at the age of 30, Wormley went to California to prospect gold and subsequently served as steward on Mississippi River steamboat and various naval vessels. After returning to Washington, Wormley contacted some of his friends and used his new skills to become a steward at the elite Metropolitan Club in Washington, D.C. Unlike his father, he had acquired the rudiments of an education at the community schools and had become confident about his business talents and contacts. As a result, shortly before the outbreak of the Civil War he accumulated enough capital and support to open a catering business on I Street near Fifteenth, next door to his wife’s candy store.

In 1868, Maryland Senator Reverdy Johnson was appointed minister to England. He had heard of Wormley’s reputation as a caterer and decided to offer him a position as his personal caterer. Even though he had a wife and four children, Wormley accepted the offer, and moved to a more spacious location near the White House. At this location, with the aid of U.S. Representative Samuel J. Hooper, the silent partner and nominal owner, Wormley opened an elegant hotel which became known as the Wormley Hotel. The older property on I Street was used as an annex to the hotel. The five-story building boasted 150 rooms, including a bar, a barbershop, and a world-renowned dining room noted for its cuisine. It was also renowned for its well-managed rooms and became the first hotel in Washington, D.C. to have an elevator and a telephone connected to the city’s first switchboard. For more than two decades the hotel was the meeting place for black and white elites as well as distinguished foreigners.

It was said that Wormley’s hotel was primarily for the wealthy and powerful white males in the capital but Wormley’s granddaughter, Imogene indicated that people of color were guests at the hotel. One person in particular was the Haitian minister and noted African scholar. Edward Wilmot Blyden. Other distinguished guests, friends, and allies included George Riggs, a banker, William Wilson Corcoran, philanthropist and financier, and U.S. Senator Charles Sumner, a frequent visitor to the Wormley Hotel.

With Wormley’s help, Sumner, a Massachusetts Republican and an abolitionist, persuaded Congress to provide legislation for funding the first public schools in Washington, D.C. for black Americans. As a result of these efforts, in 1885, a school known as the Wormley Elementary School for the Colored was built in Georgetown at Thirty-fourth and Prospect Streets. The school, the last physical monument attesting to Wormley’s life and time, remained an all black school until 1952. Subsequently, it was used as a vocational training center for special needs students. The building was condemned in 1994 and was purchased in 1997 by Georgetown University with the intent of housing its graduate policy program. Unfortunately, the university later decided to sell the property.

Wormley continued to operate his hotel and expanded his properties. In the 1870s and 1880s, Wormley and his eldest son, William, owned two country houses on what was then called Peirce Mill Road near Fort Reno in upper northwest Washington, D.C.

The outlines of this election are well-known to history buffs, but even they may be unaware of the central role a black entrepreneur and his elegant Washington hotel played in the drama. The 1876 contest, which pitted Republican Rutherford B. Hayes against Democrat Samuel J. Tilden, was too close for an easy call. The result was a months-long stalemate.

In order to declare a winner, Congress finally created an electoral commission to oversee the vote count in the disputed states of Louisiana, South Carolina and Florida. The three southern states all had carpetbagger governments and remained occupied by federal troops as part of Reconstruction.

The commission, in a decision that was widely considered tainted, tilted the election to Hayes, who had lost the popular vote but, thanks to the commission’s work, won the Electoral College by one vote, 185 to 184, and with it the presidency.

The nation reacted by moving to the edge of anarchy. Washington was awash in rumor and veiled threats of violence from the Democrats. A “bloody shirt” editorial in a leading Republic newspaper warned that any violence from the Democrats would be met with violence. Tilden urged a filibuster, which could have run out the clock in the waning days of the Grant administration.

A nervous country remembered the 1874 Battle of Liberty Place in New Orleans, during which black federal troops were employed in an effort to quell a white supremacist mob intent on overthrowing the state’s carpetbagger regime. The political fallout of that bloody confrontation put the Democrats in control of the House, signaling the coming end of radical Reconstruction and the start of Jim Crow government. Both parties feared that the volatile atmosphere in Washington could have a similarly destabilizing effect on the country. Emissaries both the Hayes and Tilden camps decided to meet privately at the Wormley Hotel to strike a bargain about the election. It was renowned for its well-managed rooms and world-class cuisine, and boasted not only an elevator but also one of the capital’s first telephones.

Although neither Tilden nor Hayes was present at the Wormley meetings, both were kept posted by telegram. A “secret deal,” later known as the Compromise of 1877, was struck on Monday, Feb. 26, 1877, only days before the end of the Grant administration. The agreement paved the way for an end of Reconstruction, because Haye’s negotiators provided written assurances to the former Confederate states that in return for conceding the election, U.S federal troops would be withdrawn and that these states would be given back the right “to control their own affairs.”

Two days after that fateful Wormley meeting, the tide shifted, as House Speaker Samuel J. Randall (D-Pa.) reversed himself, blocked the filibusterers, allowing the Hayes forces to reign supreme. He was proclaimed the winner of March 2 at 4:10 A.M. and was quietly sworn in at the White House that same morning.

As the election crisis subsided, President Hayes ordered U.S. troops withdrawn from the South. But he was soon disillusioned by the devastating effect this decision had on allowing former Confederate Army soldiers to regain political power for the next 130 years. He left office after one term and afterward devoted much of his energy and resources to black education.

Wormley continued to operate his hotel, which remained a favorite residence for a cosmopolitan clientele. He expanded his properties, secured a patent on a boat-safety device and fought for better education for black children. He was 65 when he died after a kidney stone operation in Boston on October 18, 1884. A year later the Wormley School in Georgetown was erected in his honor.

It is unknown whether James Wormley ever commented on how the “bargain” consummated in his hotel resulted in a betrayal for black Americans, but he continued to battle the tide of segregation and left a strong foundation of family values.

James Wormley died in Boston, Massachusetts, after a surgical procedure on October 18, 1884. Wormley House continued to operate until its sale in 1893.

I am pleased to report that I received the 2020 Historian of the Year Award by Historic Hotels of America, the official program of the National Trust for Historic Preservation.

The Historic Hotels of America Historian of the Year Award is presented to an individual for making a unique contribution in the research and presentation of history and whose work has encouraged a wide discussion of greater understanding and enthusiasm for American History.

I have served as an expert witness in more than 42 hotel-related cases. My extensive hotel operating experience is beneficial in cases involving:

Feel free to call me on 917-628-8549 to discuss any hotel-related expert witness assignment.