Nobody Asked Me, But… No. 242: Hotel History: Fisher Island, Miami, Florida

Nobody Asked Me, But… No. 242: Hotel History: Fisher Island, Miami, Florida 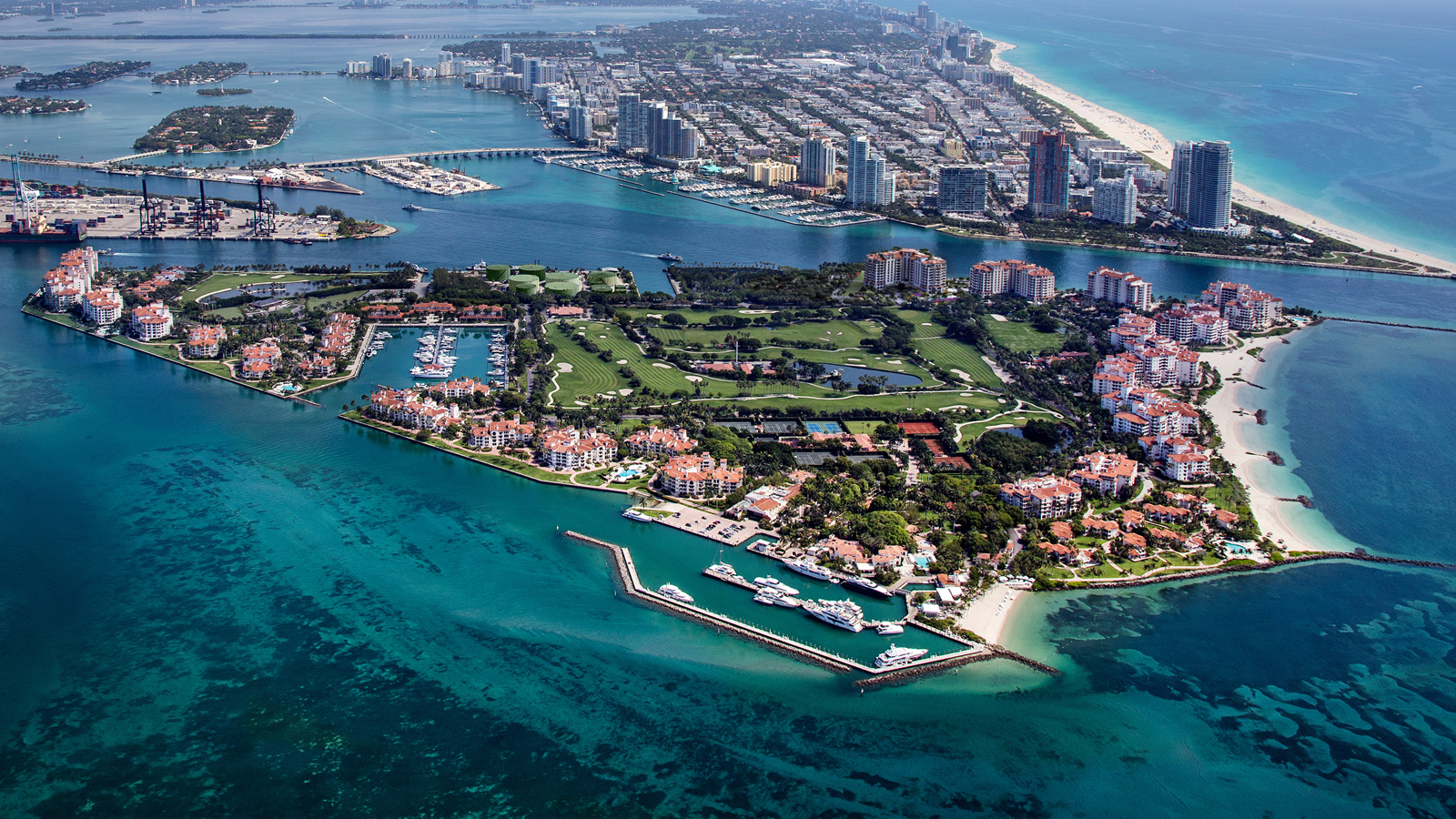 Fisher Island is in Miami-Dade County, Florida, located on a barrier island of the same name. As of 2015, Fisher Island had the highest per capita income of any place in the United States. The CDP had only 218 households and a total population of 467.

Named for automotive parts pioneer and beach real estate developer Carl G. Fisher, who once owned it, Fisher Island is three miles offshore of mainland South Florida. No road or causeway connects to the island, which is accessible by private boat, helicopter, or ferry. Once a one-family island home of the Vanderbilts, and later several other millionaires, it was sold for development in the 1960s. The property sat vacant for well over 15 years before development began for very limited and restrictive multi-family use.

Fisher Island was separated from the barrier island which became Miami Beach in 1905, when Government Cut was dredged across the southern end of the island to make a shipping channel from Miami to Atlantic Ocean. Construction of Fisher Island began in 1919 when Carl G. Fisher, a land developer, purchased the property from the Black real estate developer Dana A. Dorsey, southern Florida’s first African-American millionaire. In 1925, William Vanderbilt II traded a luxury yacht to Fisher for ownership of the island.

Despite Fisher’s extraordinary accomplishments, however, no beach, no highway, no hotels, and no race track is named for Carl Graham Fisher. Only Fisher Island bears his name.

Most of the laborers in Fisher’s workforce were Blacks from southern states, from the Bahamas and other Caribbean islands. The center of the South Florida black community was Colored Town which was created in 1896 in northwest Miami. Blacks were denied equal housing, business opportunities, voting rights and the use of the beaches. But one black construction laborer who worked as a carpenter for Florida’s East Coast Railroad recognized the need to provide housing for black workers. Dana Albert Dorsey was the son of former slaves whose formal education stopped at fourth grade. After moving to Miami, Dorsey engaged in truck farming but soon began to invest in real estate. He purchased lots for $25 each in Colored Town and constructed one rental house per parcel. He built many of the so-called shotgun houses and rented them out, but never sold any.

According to his daughter Dana Dorsey Chapman, in a 1990 interview, her father’s excellent penmanship was the product of his early formal education at the Freedman’s Bureau during Reconstruction. Dorsey’s business expanded as far north as Fort Lauderdale. He donated land to the Dade County Public Schools on which the Dorsey High School was built in 1936 in Liberty City. In 1970, its purpose was changed to meet the needs of the adults in the community by becoming the D.A. Dorsey Educational Center. In Overtown (formerly Colored Town), the Dorsey Memorial Library which opened on August 13, 1941, as built on land he donated shortly before his death in 1940. That building was renovated and restored under the direction of my late brother, Leonard Turkel, a Miami philanthropist and businessman. The first black-owned hotel in Florida was the Dorsey Hotel in Overtown. The hotel placed advertisements in black and white newspapers and was constantly upgraded by Dorsey, including adding hot and cold running water. Marvin Dunn in his book, Black Miami in the Twentieth Century reports that,

The Dorsey house was always filled with important dinner guests. Some of the white millionaires who visited were awed by Dorsey’s accomplishments, achieved under difficult circumstances. Some even went to him for financial help. According to his daughter, during the Depression, Dorsey lent money to William M. Burdine to keep his store open. When Dorsey died in 1940 flags were lowered to half-staff all over Miami.

In 1918, Dorsey purchased a 216-acre island sliced from the tip of Miami in 1905 when the government dredged out a sea-lane from Biscayne Bay. His intention was to create a beach resort for blacks because they were forbidden to use all other public beaches. When his efforts were rebuffed by the blatant racism of the time, he sold the island in 1919 to Carl Graham Fisher who named it Fisher Island. It is now one of the wealthiest enclaves in South Florida.

After Vanderbilt’s death in 1944, ownership of the island passed to U.S. Steel heir Edward Moore. Moore died in the early 1950s, and Gar Wood, the millionaire inventor of hydraulic construction equipment, bought it. Wood, a speedboat enthusiast, kept the island a one-family retreat. In 1963, Wood sold to a development group that included local Key Biscayne millionaire Bebe Rebozo, Miami native and United States Senator George Smathers and then former U.S. Vice President Richard Nixon, who had promised to leave politics. During his subsequent presidency from 1968-1973, and during the Watergate scandal, Nixon maintained a home on nearby Key Biscayne known as the “Key Biscayne Whitehouse” that was the former residence of Senator Smathers and next door to Rebozo, but none of the three ever resided on Fisher Island.

After years of legal battles and changes in ownership, further development on the island was finally started in the 1980s, with architecture matching the original 1920s Spanish style mansions. Although no longer a one-family island, Fisher Island still remains somewhat inaccessible to the public and uninvited guests, and is as exclusive by modern standards as it was in the days of the Vanderbilts, providing similar refuge and retreat for its wealthy residents. The island contains mansions, a hotel, several apartment buildings, an observatory, and a private marina. Boris Becker, Oprah Winfrey, and Mel Brooks are among the celebrities with homes on the island.

The Fisher Island Club is made up of 216 acres and approximately 800 residences representing over 40 countries. Accessible only by ferryboat or private yacht, Fisher Island is consistently ranked as one of the wealthiest zip codes in the U.S. The private membership-only club boasts a Beach Club with one of the country’s only truly private beaches; a 15-room all suite luxury hotel; a 9-hole, award-winning P.B. Dye championship golf course; 17 tennis courts featuring all four “Grand Slam” surfaces plus 4 pickleball courts, two deep-water marinas; a variety of casual and formal dining venues; a full-service spa, salon and fitness center; the Vanderbilt Theater; an aviary with over a dozen exotic birds; and an observatory for stargazing.

Fisher Island Club Hotel & Resort, a member of Leading Hotels of the World, is a boutique property comprised of a collection of just 15 graciously-appointed historic and reimagined cottages, villas and guesthouse suites that surround the now iconic limestone and marble Vanderbilt Mansion – mere steps from the beach, pool, spa, restaurants and marina. In April 2018, Bloomberg reported that the average income for Fisher Island was $2.5 million in 2015, making Fisher Island’s zip code the wealthiest in the United States.