Nobody Asked Me, But… No. 241: Hotel History: Menger Hotel

Home/Nobody Asked Me, But… No. 241: Hotel History: Menger Hotel

Nobody Asked Me, But… No. 241: Hotel History: Menger Hotel 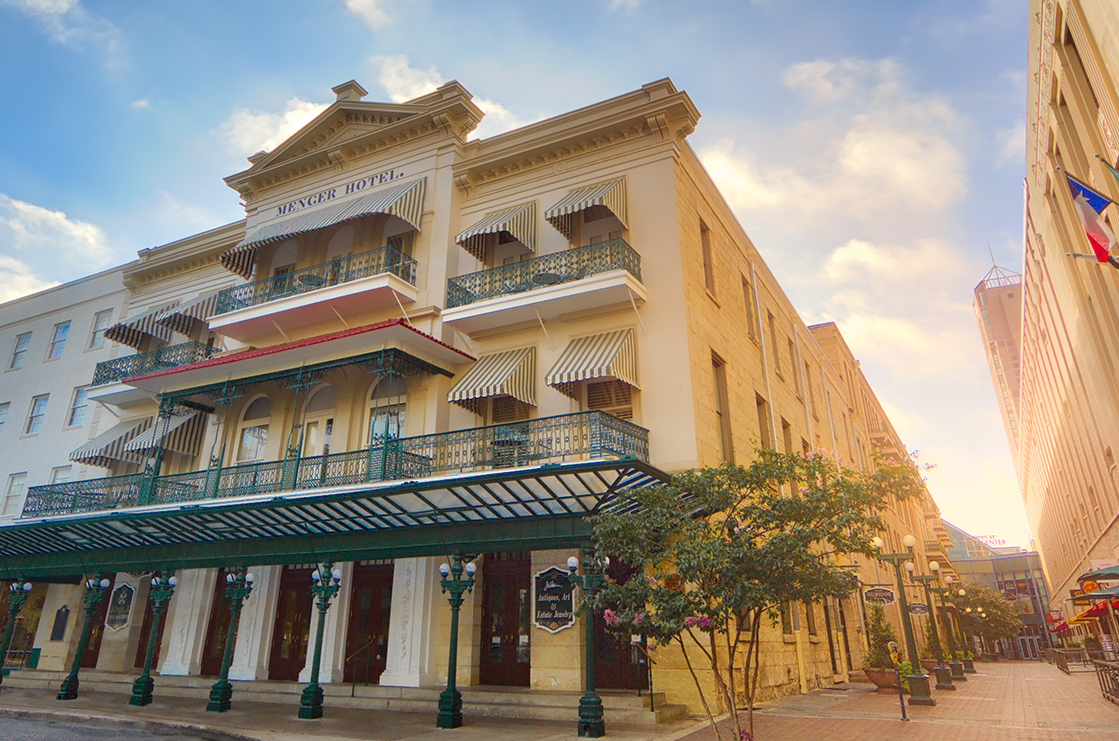 The Menger Hotel, one of the most iconic and historically significant buildings in San Antonio, was constructed on Alamo Plaza in 1859 by German immigrants Mary and William Menger. Mary arrived in San Antonio in 1846 and when her husband died soon after her arrival, she opened a boarding house. The building provided studio space for renowned sculptor Gutzor Borglum, most famous for his work at Mt. Rushmore. After William Menger opened the Menger Brewery in 1855, he married Mary and the success of the Brewery operation led to the construction of the Menger Hotel.

The original two-story, 50-room structure was designed by San Antonio’s first prominent architect, John M. Fries who was responsible for the original City Market House and Casino Hall, both since demolished. He is also credited with repairing the Alamo in 1850 and saving it from destruction. Menger commissioned a three-story, 40-room addition in 1859 between the hotel and the brewery.

The San Antonio Herald on January 18, 1859, reported on the hotel project:

“The Menger Hotel is rapidly drawing towards completion. The main room on the second floor is unsurpassed for beauty. The finishing of the walls and ceilings being developed and executed by our fellow citizen P.C. Taylor. The walls and ceilings unite the smoothness of glass to the whiteness of alabaster, whilst the mouldings are conceived in fine taste and executed in the best style of art.”

The undersigned has with great care and expense built and fitted out a large & commodious hotel on Alamo Square which [will] be opened on the 1st of February 1859.

He flatters himself that his establishment will be large and well ventilated stable, which will at times be kept supplied with the best provender, and attended to by experienced hostlers.

During four years of the Civil War, the hotel housed many Confederate Army soldiers including Sam Houston and Robert E. Lee. It provided food service in order to feed the officers and soldiers. The hotel also offered hospital beds and nursing services for medical care of wounded soldiers.

After William Menger died at the age of forty-four years in 1871, Mary and her son Louis William continued to operate the brewery and the hotel. In 1877, newly-built railroad service to San Antonio contributed to the growing success of the Menger. The hotel offered a unique mail chute on each floor that allowed guests to simply drop mail into the chute which would then be collected, taken to the post office and delivered to the address on the envelope. Talk about progress!

For many years, another popular draw to the hotel was the cuisine offered by Mary Menger herself. Mary had long been preparing meals for her guests at her boarding house and she felt doing so at the Menger Hotel would strengthen its appeal. The Mengers purchased the best beef, chicken, fresh country butter and eggs the markets had to offer. They also prided themselves on providing their guests with the finest delicacies of the time. The Mengers also sent out a wagon with benches that would drive around downtown San Antonio picking up businessmen in order to take them to the hotel to dine on the delicious fare. Mary made up the menu for her guests, which included a selection of soups, beef, pasta, veal, and a variety of tasty desserts. All of this would be served in one sitting and every person left the dining room feeling quite satisfied. Mary was also known for throwing lavish dinner parties for celebrity guests that only further proved her culinary excellence. Many of Mary’s recipes are still offered today in the hotel’s Colonial Dining Room.