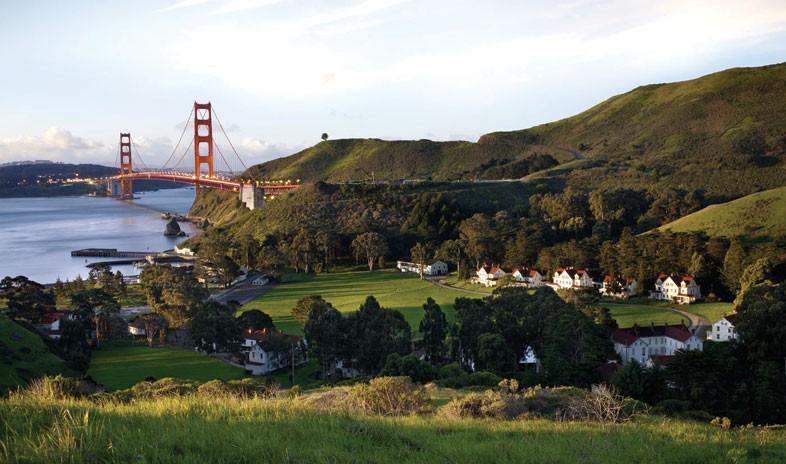 The history of the spectacular site of the Lodge at the Golden Gate commences with the coastal Miwok Indian tribes who occupied Horseshoe Cove long before there was a Golden Gate Bridge. In 1866, the U.S. Army acquired the site for a military base to fortify the north side of the harbor entrance. The twenty-four buildings around the ten-acre parade ground at Fort Baker were developed between 1901 and 1915.

As the United States entered World War II, the army created the harbor defenses of San Francisco which commanded most of the Bay Area fortifications including Fort Baker, Fort Cronkhite and Fort Barry. Fort Baker’s Horseshoe Cove became the hub of the Harbor Defense’s mine depot, where metal mines with 800 pounds of TNT were planted out at sea. Horseshoe Cove also was the home of the Marine Repair Shop which maintained the civilian boats that were conscripted for use in the mine depot.

After the end of World War II, the threat of air attack surpassed that of naval assault and Fort Baker became the headquarters for the Sixth U.S. Army Air Defense Command Region which housed and deployed anti-aircraft missiles.

From 1970 until the 1990s, the 91st Infantry Division, or “The Wild West Division,” was stationed at Fort Baker under the command of the Travis Air Force Base. The 91st had been active in both world wars, but was deactivated in 1945. One year later, the 91st was reactivated as a part of the U.S. Army Reserve. The Wild West Division was responsible for creating the training exercises used by the Army National Guard, the Army Reserve Combat Support, and the Combat Service Support.

During this era, Fort Baker was designated for transfer to the National Park Service when it was no longer needed as a military base. In 1973, it was officially listed as a Historic District in the National Register of Historic Places.

In 1995, the armed forces transferred the land to the Golden Gate National Recreation Area. By the end of 2,000, there were no soldiers left at Fort Baker as the 91st moved on to Camp Parks, California. As of 2002, Fort Baker was no longer a military post; it was a park.

In January of 2005, an agreement was reached between the city, the National Park Service, and developers that Fort Baker be renovated and turned into a hotel and conference center. Thirteen historic lodgings have been renovated as well as seven historic common buildings.

Cavallo Point – The Lodge at the Golden Gate opened in 2008 on 45 acres with half of the 142 lodging units located in landmark buildings on the 10-acre parade ground – most offering spectacular views of San Francisco and the Bay. The other half are 21st century units designed for environmental sustainability with commanding views of the Golden Gate Bridge.

Cavallo Point provides more than 15,000 square feet of meeting space to host seminars, educational programs and corporate events. The lodge’s Healing Arts Center and Spa has 12 treatment rooms, a heated basking pool and a medicinal herb garden where guests can pick their own ingredients for treatments. The Murray Circle restaurant has a Michelin star and serves French-inspired California cuisine and has a 13,000-bottle wine cellar.

The lodge also serves as the home for the Institute at the Golden Gate, an environmental organization that is a project of the Golden Gate National Park Conservancy and the National Parks Service. Cavallo Point offers an ambitious program of cooking classes including a soufflé workshop, cooking from the Farmer’s Market and a chocolate workshop.

Fodor’s Review sums up Cavallo Point in these glowing terms:

“Set in the Golden Gate National Recreation Area, this luxury hotel and resort with a one-of-a-kind location on a former army post contains well-appointed eco-friendly rooms. Most of them overlook a massive lawn with stunning views of the Golden Gate Bridge and San Francisco Bay. Murray Circle, the on-site restaurant, uses top-notch California ingredients and has an impressive wine cellar, and the neighboring casual bar offers food and drink on a large porch.”