Nobody Asked Me, But… No. 233: Hotel History: The Adolphus Hotel

Home/Nobody Asked Me, But… No. 233: Hotel History: The Adolphus Hotel

Nobody Asked Me, But… No. 233: Hotel History: The Adolphus Hotel 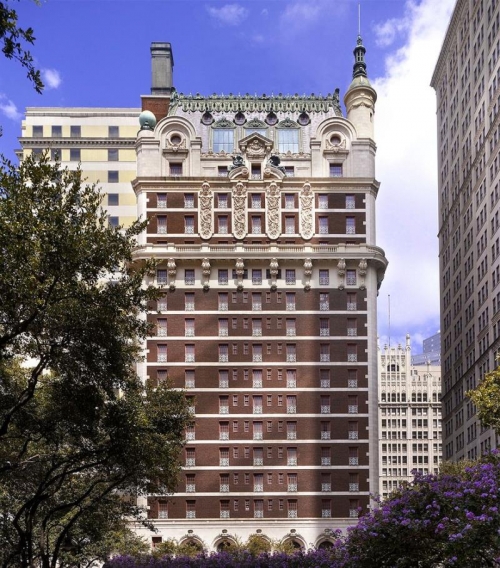 The Adolphus Hotel was built by and named for Adolphus Busch, the founder of the Anheuser-Busch Brewing Company. Legend has it that Adolphus Busch donated the hotel to Dallas as a thank you for its enthusiastic acceptance of his famous Midwestern brew. It was designed in a Beaux-Arts style by architects Barnett, Haynes & Barnett of St. Louis who also designed the Hamilton Hotel, St. Louis; the Hotel Claridge, Memphis; the Connor Hotel, Joplin; the Marquette Hotel, St. Louis; the Southern Hotel, Chicago and the Mark Twain Hotel, Hannibal.

Under the management of Otto Schubert from 1922-1946, the Adolphus gained a national reputation. In 1916, the architects Otto Lang and Frank Witchell designed an annex called the “Junior Adolphus” which added 229 guestrooms. Lang & Witchell designed a number of other buildings that are listed on the National Register of Historic Places. The firm dominated construction in Dallas from 1910 to 1942 and designed great buildings such as the Dallas Power & Light and the Lone Star Gas Company, both of which opened in 1931.

The Adolphus Hotel underwent additional expansions, first in 1916, then in 1926 and finally in 1950 to bring the total number of guestrooms to 1,200. With a rooftop restaurant, the Adolphus was nighttime hot spot through the Roaring ‘20s and the Great Depression. Once the largest fully air-conditioned hotel in the world, it was later downsized to 422 larger guestrooms to provide more space, more suites, more bathrooms and more comfort for its guests.

Another big hit was Art Victor’s Ice Time Revue featuring Olympic star Dorothy Franey in the Adolphus Century Room. She was a pioneer in women’s sports who embodied the Olympic spirit. In 1932, she helped introduce women’s speed skating as a demonstration sport at the Winter Olympics in Lake Placid, N.Y. Earlier, Dorothy Franey was a tennis, basketball, softball and diving champion who set world speed-skating records as a high school senior.

The Adolphus Hotel was featured in Victor H. Green’s Negro Motorist Green Book in 1936. Green’s Book was a guide for blacks seeking hotels, restaurants, hair salons and gas stations who accepted their patronage.

During the 1944 presidential election, President Franklin Roosevelt’s campaign headquarters was located on the hotel’s seventh floor. The Busch family owned the Adolphus for 37 years, despite the founder’s untimely death just one year after opening. In 1949, Leo Corrigan, a real estate developer, bought the Adolphus Hotel. Along with the adjacent Baker Hotel, the Adolphus shared the most important citywide functions, conventions and athletic events.

Perhaps no newspaper columnist knew Dallas better than R.W. Apple Jr. of the New York Times. On December 17, 1999 he wrote:

“The words and music have stuck in my mind for 40-odd years, because they seemed so apt. Frank Loesser wrote them for a musical called “The Most Happy Fella,” and they stopped the show every time.

Big money, big hair, big talk. Such is the lingering sterotype of this city. It occupies a sizable spot in the national consciousness as the home of the big, bad Dallas Cowboys, of J.R. Ewing and Miss Ellie and all the gang at Southfork, and of the little guy with the big ears and bigger ambition, H. Ross Perot, who was a billionaire before he turned 40.

And for those old enough to recall the events of November 1963, it occupies an especially dark corner of memory, as the cursed place where John F. Kennedy was shot.”

In 1981, the Adolphus’ third owner, the Westgroup Partners commenced an $80 million restoration of the hotel. The massive project combined several adjacent buildings with the original tower and was awarded the 1982 American Institute of Architects Honor Award.

The Adolphus has been named one of the top ten hotels in the United States by Condé Nast Traveller and received high ratings from Zagat, Fodor’s and Frommer’s. It is listed on the National Register of Historic Places.