Nobody Asked Me But… No. 231: Brown Palace Hotel, Denver, Colorado

Home/Nobody Asked Me But… No. 231: Brown Palace Hotel, Denver, Colorado

Today's News Travel in 2022 – A Look Ahead: Tripadvisor Research, in Partnership With Ipsos MORI, Reveals 2022 Is the Year of the Travel Rebound

Nobody Asked Me But… No. 231: Brown Palace Hotel, Denver, Colorado 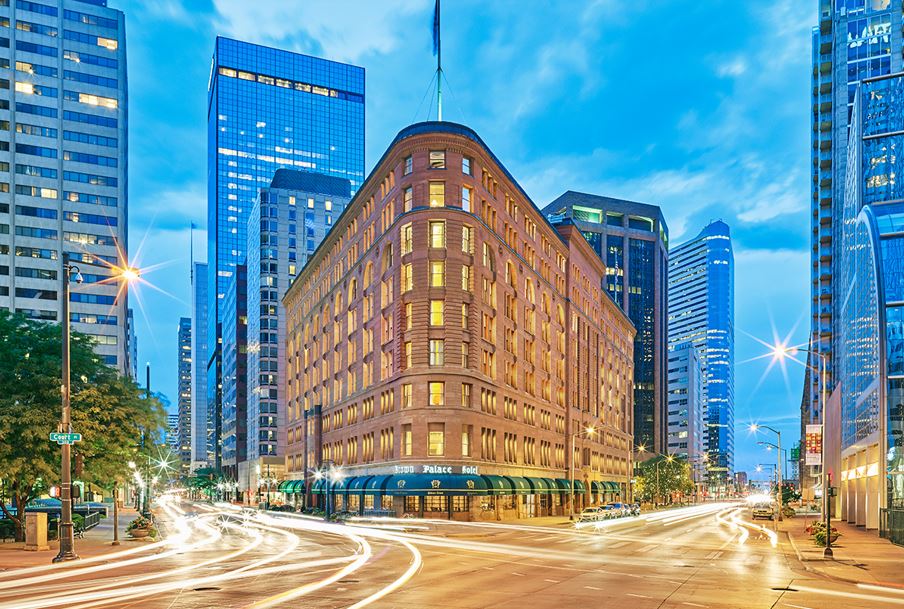 The Brown Palace Hotel opened in 1892 with an eight-story atrium designed by architect Frank E. Edbrooke (1840-1921). More than 400 wrought iron grillwork panels ring the lobby from the third through the seventh floors. Two of them are upside down, one to serve the tradition that man is imperfect; the other sneaked in by a disgruntled workman.

The Brown Palace was built on a cow pasture by Henry Cordes Brown, a carpenter who had driven an oxcart across the country and arrived at Cherry Creek in Kansas territory in 1860. By the late 1880s, Brown owned much of the former miner’s encampment that became Denver. He built homes, stores and churches on most of it and gave a parcel to the state for a site for the State Capitol. The Windsor Hotel, one of Denver’s most prestigious hotels, offended Brown by refusing to admit him because he was wearing cowboy clothing. Brown decided to build a hotel that would put the Windsor to shame while allowing cowboy attire. Construction of the Brown Palace Hotel began in 1888 on the Italian Renaissance building using red Colorado granite and Arizona sandstone for the building’s exterior. Because no wood was used for the floors and walls, the hotel was celebrated as the second fireproof building in America.

Architect Frank E. Edbrooke, a Civil War veteran, was termed the “dean” of Denver architecture and several of his surviving works are listed on the National Register of Historic Places. Artist James Whitehouse was commissioned to create 26 medallions carved in stone, each depicting a native Colorado animal. These “silent guests” can still be seen between the seventh floor windows on the hotel’s exterior.

For the interior, Edbrooke designed an atrium lobby with the balconies rising eight floors above ground surrounded by cast iron railings with ornate grillwork panels. The completed hotel cost $1.6 million and another $400,000 for furnishings- a remarkable sum for the time. It included Axministers, Wiltons and Brussels carpets; Irish Point, Clury and Brussels net curtains; Irish linen; Haviland, Limoges and Dalton china; Reed and Barton silver. All the furniture was solid wood in white mahogany, antique oak and cherry. Chairs and sofas were covered in silk. Each guestroom had its own fireplace with kindling and coal provided by bellboys.

At opening the hotel was known as the H.C. Brown Palace. Henry Brown died in San Diego, California in 1906 at the age of 86. His body was returned to Denver where permission was given by the governor for it to lie in state in the capital building, built on the land with which he’d clinched the proposition for Denver’s becoming the Territorial Capitol.

On May 24, 1911, a scandalous double murder took place at the Brown Palace which is reported in the book by Dick Kreck Murder at the Brown Palace: A True Story of Seduction and Betrayal. The story involves high society, adultery, drugs and multiple murders.

Beginning in 1905, every president since Theodore Roosevelt has visited the hotel except Calvin Coolidge. President Dwight Eisenhower was such a frequent guest that the hotel was called the western White House.

Every year since 1945, the hotel lobby is the site of the Stock Show championship when a fifteen hundred to two thousand-pound steer is on exhibit. In its storied history, the hotel has hosted Buffalo Bill Cody, John Philip Sousa, several Barrymores, Lillian Russell, Mary Pickford and the Beatles. Almost every Denver resident has a story of a birthday, anniversary, wedding or other affair held at the Brown Palace. The tradition of “taking tea” is a long-standing one, guests have been doing it for over a century. Afternoon tea is still served daily in the middle of the atrium lobby, accompanied by either a pianist or harpist. Specially commissioned Royal Doulton bone china graces each table along with engraved silver tea pots. No detail is overlooked, not even the silver tea strainers. Afternoon tea includes scones, pastries and delicate tea sandwiches prepared fresh every day. Devonshire cream is shipped directly from England. Guests can choose between the traditional Brown’s tea or the Royal Palace tea. Uniformed wait staff are trained in the art of English tea service, a rare accomplishment in mid-America.

By 1974, the concept of luxury had changed. An average of sixty percent of Brown Palace guests were attending conventions. They were accommodated by construction in 1959 of the 22-story tower building across the street that doubled the size of the hotel from 226 rooms to 479 rooms. By the mid-1990s, Denver opened a new $4.9 billion international airport and rejuvenated its downtown with new stores, new restaurants, new cultural attractions and a new ball park.

While the Windsor Hotel was demolished in the 1950s, the Brown Palace has never once closed its doors since opening 128 years ago. It remains, a magnificent four-star hotel in the heart of one of America’s supreme mountain ranges. The Brown Palace is known for many special qualities: its unusual shape, stunning eight-story atrium lobby, elegant atmosphere and its singular ability to treat guests like royalty. In the Palace Arms restaurant, guests can see two golden eagles made of papier mache- parade decorations from Napolean’s march from the Arc de Triomphe to Notre Dame to crown himself emperor.

In 2013, the Brown Palace received a three-year restoration of the building’s façade by the Denver-based Building Restoration Specialties Company which replaced mortar joints, small areas of damaged stone and repaired flashings. The stone used to replace damaged areas of the façade was hand-carved, custom-made Utah sandstone. From the hand-painted wallpaper in the formal dining area and the on-site well used for drinking water to the painted glass ceiling that showers light on patrons enjoying tea in the atrium, the Brown Palace has managed to stay current without shedding its history.