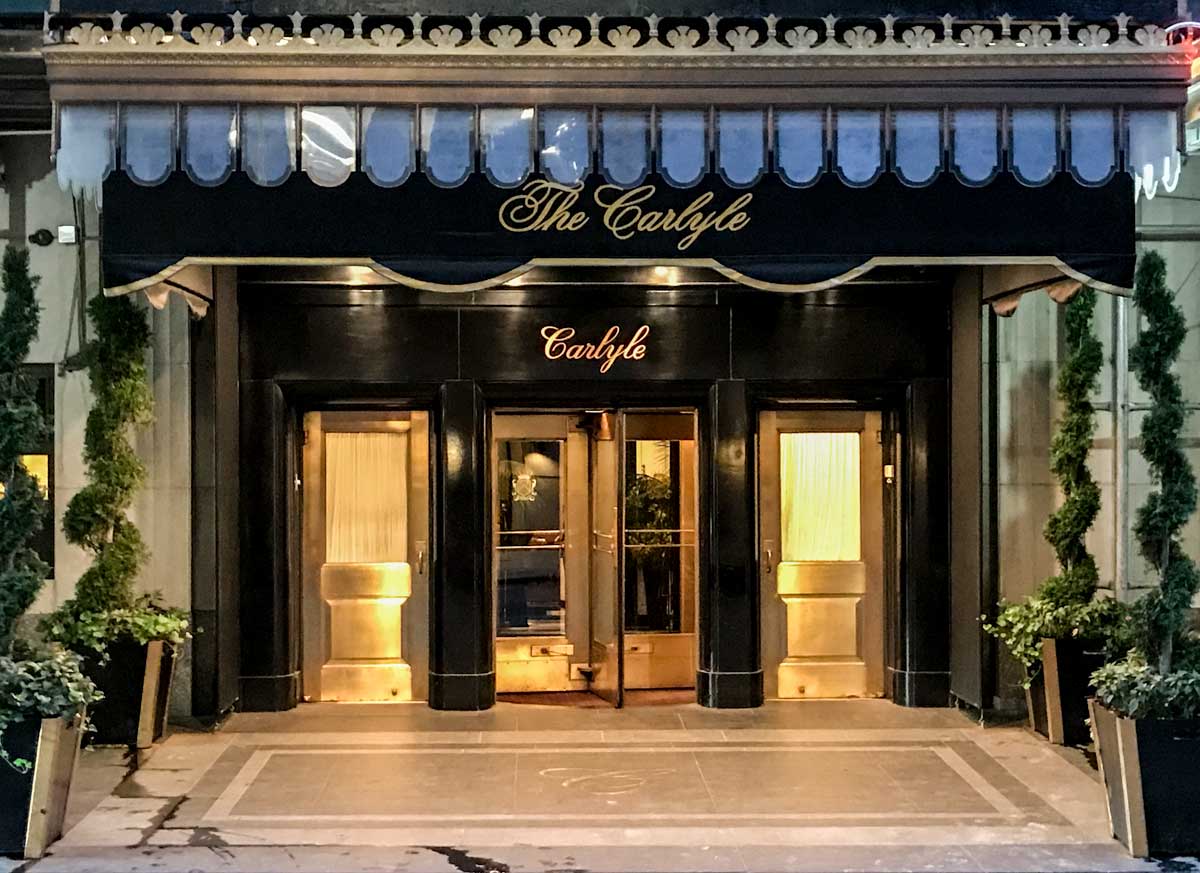 The Carlyle Hotel was built by Moses Ginsberg and designed in Art Deco style by architects Sylvan Bien (1893-1959) and Harry M. Prince. Bien and Prince both had previously worked at the famous architectural firm of Warren & Wetmore. Since opening in 1930, The Carlyle has become a living legend that embodies the spirit of New York: elegant, sparkling, worldly and nostalgic.

However, by the time the Carlyle was ready to open its doors, the 1929 stock market crash ended the boom times. The new hotel went into receivership in 1931 and was sold to the Lyleson Corporation in 1932. The new owners kept the original management which was able to improve occupancy and to stabilize the Carlyles’ financial situation. In 1948, New York businessman Robert Whittle Dowling purchased the Carlyle and began to transform it into the most fashionable hotel in Manhattan. It became known as the “New York White House” during President John F. Kennedy’s administration who maintained an apartment on the 34th floor for the last ten years of his life. He occupied the apartment in a well-publicized visit for a few days before his inauguration in January 1961.

For almost nine decades, The Carlyle on the elegant upper East Side of New York City has pampered rich and famous guests from around the world with its timeless luxury, savvy discretion, attention to detail, smooth service and personalized touches. This swanky iconic hotspot, a Rosewood Hotels property, was celebrated in a cool new feature-length documentary film, Always at The Carlyle in 2018. The movie embraces more than 100 personalities, who share their colorful Carlyle stories. Among the celebrities spotlighted are George Clooney, Harrison Ford, Anthony Bourdain, Tommy Lee Jones, Roger Federer, Wes Anderson, Sofia Coppola, Jon Hamm, Lenny Kravitz, Naomi Campbell, Herb Albert, Condoleezza Rice, Jeff Goldblum, Paul Shaffer, Vera Wang, Alexa Ray Joel, Graydon Carter, Bill Murray, Nina Garcia, Isaac Mizrahi, Buster Poindexter, Rita Wilson and Elaine Stritch. Yet some of the most gracious and insightful sound-bites are voiced by staff, many of whom have worked at The Carlyle for decades, such as the concierge Dwight Owsley. These well-trained employees personify what The Carlyle does best.

The Café Carlyle is noted for the murals by Marcel Vertès, which were cleaned in the summer of 2007 as part of a renovation and redecoration of the café. Interior designer Scott Salvator oversaw the renovation and redecoration, the first significant alterations to the café since its debut in 1955. During the renovations, the café closed for three months and was widely praised after reopening in September 2007. Salvator removed the dropped acoustical ceiling, exposing two feet of newly found space which allowed for a modern sound and a lighting system to appeal to a younger generation.

The Bemelmans Bar is decorated with murals depicting Madeline in Central Park painted by Ludwig Bemelmans. Bemelmans is the namesake of the bar, and his murals there are his only artwork on display to the public. Instead of accepting payment for his work, Bemelmans received a year and a half of accommodations at the Carlyle for himself and his family.

It is interesting that the Carlyle has survived in splendid isolation that has heightened its visibility in comparison with most of these other pioneering residential towers. Much of the credit for that must go to Peter Sharp, the late developer who bought the hotel and also owned the low-rise building that fills the avenue blockfront across the street. That building was for many years the headquarters of Parke-Bernet, the auction house that was subsequently acquired by Sotherby’s which relocated it to a warehouse-like building on 72nd Street and York Avenue. After World War II, Parke- Bernet was the center of the art world and largely responsible for many art galleries moving uptown around Madison Avenue from 57th Street. Sharp could have erected a very major new tower on the site after the auction house was moved, but he chose to not develop it and to protect the sweeping Central Park views for the Carlyle. The low-rise building now contains several important art galleries and some offices of the real estate division of Sotheby’s as well as some high-end boutiques.

The Carlyle has consistently been recognized as one of the top hotels by the world’s leading publications, travel magazines and consumer organizations: