Nobody Asked Me, But… No. 226 Hotel History: Peninsula Hotel, New York

Nobody Asked Me, But… No. 226 Hotel History: Peninsula Hotel, New York 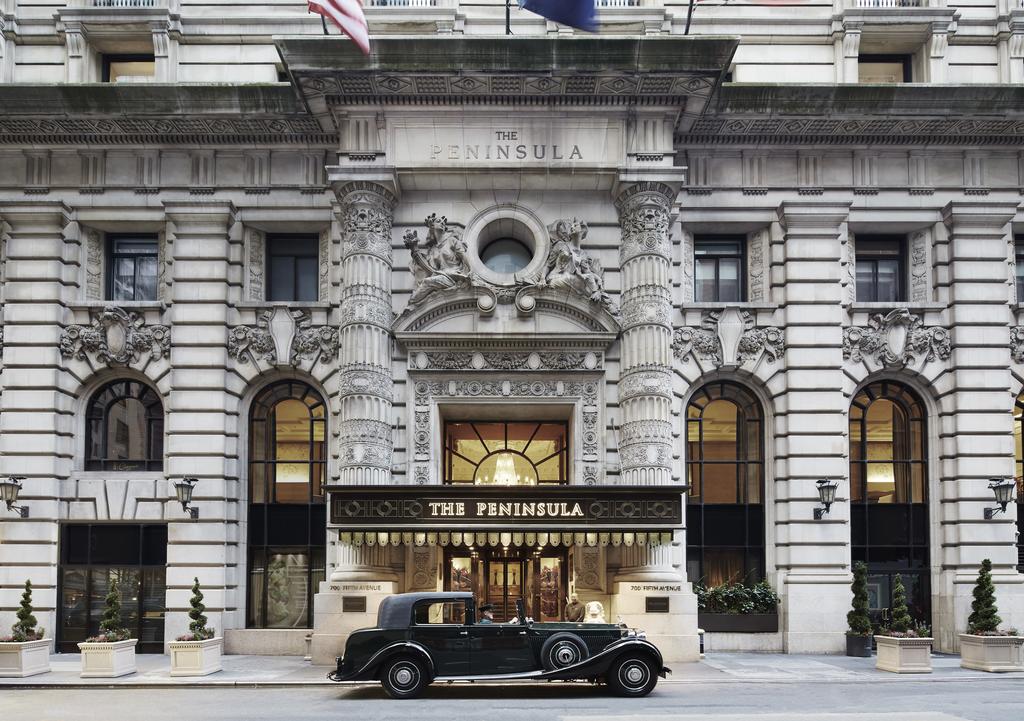 On February 7, 1989, the Peninsula Hotel was designated as a Landmark by the New York Landmarks Preservation Commission. The original neo-Italian Renaissance Gotham Hotel is one of the few structures on Fifth Avenue which recalls the golden age of luxury hotels and the prominent place they occupied in the formation of the city. Erected in 1905, it was designed by the architectural firm of Hiss & Weekes and is among the oldest of the early “skyscraper” hotels. These hotels heralded the transformation of Fifth Avenue from an exclusive residential street – Millionaires’ Row − to a fashionable commercial thoroughfare. Rising twenty stories, including a multi-storied rooftop addition, at the southwest corner of West 55th Street and Fifth Avenue, the boldly-rendered Gotham is a stylistic counterpoint to its contemporary, the flamboyant Beaux-Arts St. Regis Hotel directly across Fifth Avenue. It also skillfully complements McKim, Mead & White’s University Club which adjoins the Peninsula to the south.

The Architectural Record reported in November 1902:

We all know how woefully individualistic our builders have been, resulting in a mass of fragmentary, inharmonious, clashing architecture, no attempt being made to work in common for the sake of beauty and uniformity. This great projected hotel (the Gotham) of eighteen stories is designed to harmonize with the adjacent University Club, which is a fine piece of architecture. The architectural lines of the hotel will follow the lines of the University Club. The same centre line will make a continuous arcade of five openings in the club and five in the hotel. The stone balustrade will be carried out on the same lines of the present balustrade of the club. Thus the whole block will be tied together. The general scheme of architecture is also the same as that of the club, being Italian Renaissance as far as possible in an eighteen storied building.

The firm of Hiss & Weekes continued in practice for thirty-four years producing a number of buildings in the city including: the spectacular Belnord Apartments (1908-09), a massive neo-Italian Renaissance apartment house on West 86th Street (a designated New York City Landmark); and the handsome Beaux-Arts townhouses at 6 and 8 West 65th Street (now in the Upper East Side Historic District).

The Gotham never seemed to find the favor it sought, in part because it was overshadowed by the subsequent openings of the St. Regis Hotel across Fifth Avenue and then the Plaza Hotel four blocks to the north. The Gotham was foreclosed in 1908 after it failed to get a liquor license. As Christopher Gray reported in his Streetscapes article in the New York Times (January 3, 1999):

The Fifth Avenue Presbyterian Church is at the northwest corner of 55th and Fifth and the St. Regis had just barely won permission to serve liquor − it was in technical violation of a restriction prohibiting liquor sales within 200 feet of a church. The Gotham, directly across 55th Street from the church was unequivocally in violation of the law. Several newspaper accounts state that United States Senator Thomas C. Platt and other influential politicians were silent partners on the original Gotham team, and in 1905 and 1907 bills were introduced in the New York State Legislature exempting hotels from the provision if they had more than 200 rooms.

Neither of the bills, which were clearly fashioned for the Gotham, passed. In 1908 the Gotham went into foreclosure over a $741 butcher’s bill, and the Real Estate Record & Guide said that the failure was due solely to the liquor restriction, which it denounced as ludicrous. The hotel, which had cost $4 million to build, was sold for $2.45 million.

The hotel had various owners until it was sold in 1920 to William and Julius Manger, proprietors of the Manger chain of hotels including the Martha Washington Hotel for Women. Subsequently, the Kirkeby Hotel Group purchased the property in 1944. Other owners were Mrs. Evelyn Sharp, Webb & Knapp, Wellington Associates, Swiss hotel owner Rene Hatt, Sol Goldman, Irving Goldman, Arthur Cohen, William Zeckendorf Jr. and Steven Goodstein. Finally, in 1988, the Hong Kong and Shanghai Hotels Ltd., the parent company of the Peninsula Group of hotels in Asia, bought the Gotham Hotel for $127 million and renamed it the Peninsula Hotel. At last, the Gotham got the owner it had needed since 1905. If you ever stayed at the original Peninsula Hotel in Hong Kong, you know what true luxury and service really feel like: complimentary fruit and champagne in your room while watching the Star Ferry cross the harbor outside your window; a Rolls-Royce for guest transportation to meetings and the airport; savoring a double espresso in the busy lobby bar while reading the International Herald Tribune.

The New York Peninsula Hotel has received the AAA Five Diamond Award for thirteen consecutive years. The Peninsula has one of the best and biggest hotel health clubs in New York including a 35,000 square foot spa, a glass-enclosed swimming pool and the rooftop bar and terrace.

The hotel has opted for an amenity that is more sporty than chic: chauffeur-driven Mini Coopers. The cars are available for up to three hours a day to guests who book a suite. Passenger can follow city tours that are stored on iPhones or iPads in the cars, or they can simply tell drivers where they want to go. The cars, the Mini Cooper S Clubman model, have been customized a bit. They hold a mini-refrigerator and a cargo box on top for shopping bags. Aside from the make, the main difference between these and the Hong Kong fleet: you won’t get a trip to the airport. These vehicles are intended strictly for joy rides.

The old Gotham is an orphan no more.