Home/Nobody Asked Me, But… No. 224: Hotel History: The Red Lion Inn 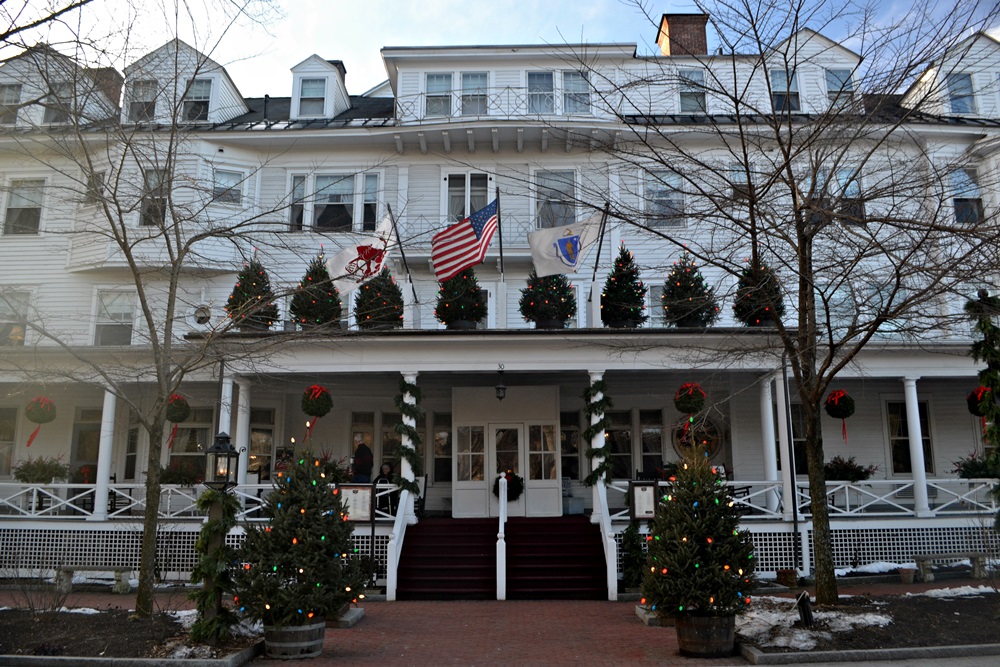 For more than 246 years, the Red Lion Inn has been welcoming visitors to the Berkshires with traditional New England hospitality. Sometime in 1773, Anna and Silas Bingham opened a general store which became a stagecoach stop, tavern and the Stockbridge House. In 1786, Daniel Shays led a group of more than 100 local farmers and citizens to protest post-war taxation. Stockbridge was the headquarters for “Shays Rebellion.”

In 1807, Anna Bingham sold the eight-room inn to store owner Silas Pepoon. Over time, the Inn changed hands many times and in 1862 Charles and Mert Plumb began a ninety-year family ownership dynasty. The arrival of the Housatonic Railroad in 1842 and its extension to Pittsfield in 1850 made Stockbridge more accessible and attractive to wealthy families who built grand “cottages”. In 1884, the Inn was enlarged to accommodate 100 guests and the quality of food and amenities improved. Under Mert Plumb’s direction the Inn was renamed “Plumb’s Hotel” and became a museum-like repository of antique furniture, crockery, pewter and teapots.

In 1896, a fire nearly destroyed the property but the Berkshire Courier in Great Barrington reported that “Mrs. Plumb’s noted collection of colonial china, pictures, wearing apparel and furniture, the largest of its kind in the country, and to the delight of everyone who went to Stockbridge, was saved.” Mr. Plumb’s nephew, Allen T. Treadway (aided by his assistant James H. Punderson, whose daughter Molly later became the third wife of famed illustrator Norman Rockwell) undertook the restoration and in May 1897, the Red Lion was opened, more attractive than ever.

From the Red Lion Inn’s inception until it was leveled by fire in 1896, its crest was a red lion waving a green tail. It is believed that while the red lion was symbolic of the Crown, the green tail indicated sympathy for the colonists during the Revolutionary War. At its rebirth in 1897, Mr. Treadway unveiled a new crest in the form of a shield. At the top were a lion and two dates: 1773 and 1897, indicating the birth and rebirth of the Inn. Within the body of the shield were a teapot, plate, Franklin stove, highboy, clock and two large keys representing the Inn’s fine collection of antiques. In the early 1920s, the shield was replaced by the traditional lion that we see today, plump and well-fed sporting the familiar red tail.

In November 1968, the Inn was nearly demolished for construction of a gasoline station. It was rescued by John and Jane Fitzpatrick, the founders of Country Curtains, a mail order business. The Fitzpatricks were so intrigued by the Inn’s history that they installed a large new kitchen and dining room called Widow Bingham’s tavern. On May 29, 1969, the Inn was opened for year-round business for the first time. In 1974, several nearby buildings, including the former village firehouse, were purchased to be used as guesthouses. Mr. Fitzpattrick served four terms as Massachusetts state senator from 1972-1980 and once again the Red Lion Inn became the center of political activity in Berkshire County.

A charter member of Historic Hotels of America since 1989, The Red Lion Inn has been providing food and lodging to guests for more than two centuries. The Red Lion is recommended by National Geographic Traveler, The New York Times, and The Boston Globe. It offers 108 antique-filled rooms and suites, formal and casual dining with an emphasis on contemporary regional specialties, and the Lion’s Den pub with nightly entertainment, a year-round heated outdoor pool and hot tub (with radiant-heated patio).