Nobody Asked Me, But… No. 218; Hotel History: Raymond Orteig and Charles Lindbergh

Home/Nobody Asked Me, But… No. 218; Hotel History: Raymond Orteig and Charles Lindbergh

Nobody Asked Me, But… No. 218; Hotel History: Raymond Orteig and Charles Lindbergh 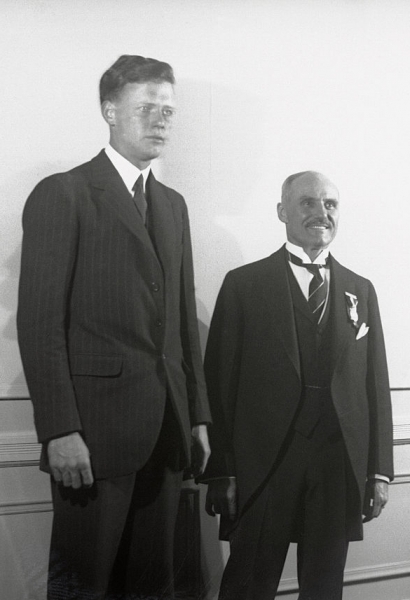 (Original Caption) Colonel Charles A. Lindbergh and Raymond Orteig posed together at Hotel Brevport here after Lindy had received the $25,000 Orteig prize for first nonstop flight from New York to Paris.

Raymond Orteig (1870-1934) was the New York City hotel owner who offered the $25,000 Orteig Prize to the first aviator to fly between New York City and Paris.

In 1919, Raymond Orteig, a practically unknown New York City hotel owner, issued an extraordinary challenge to the fledgling flying world. Enthralled by tales of pioneer aviators, the French-born Orteig, who owned the Brevoort and Lafayette Hotels in New York City, offered a purse of $25,000 to be awarded to “the first aviator who shall cross the Atlantic in a land or water aircraft (heavier than air) from Paris or the shores of France to New York, or from New York to Paris without a stop.”

Orteig said his offer would be good for five years, but five years came and went without anyone accomplishing this feat. No one even tried. In 1926, Orteig extended the term of his offer for another five years. This time around, however, aviation technology had advanced to a point where some thought that it might, indeed, be possible to fly non-stop across the Atlantic Ocean. Charles A. Lindbergh was one who thought it could be done, but few people believed that this obscure mail pilot had any chance of collecting Orteig’s $25,000 prize.

Born in France, Raymond Orteig emigrated to the United States in 1882. He began a career in the hotel and restaurant business and eventually became the maitre d’ at the Lafayette Hotel in New York City, which was located not far from the Brevoort Hotel in Greenwich Village. In 1902, he purchased the Brevoort, which was known for its basement café. Comprising three adjoining houses on Fifth Avenue between 8th and 9th Street, the Brevoort had gained a reputation in the late 19th century as a stopping place for titled Europeans. The Brevoort Café’s French menu, enriched by Orteig’s yearly wine-buying trips to France attracted an illustrious crowd of Greenwich Village artists and writers. Among them was the popular Mark Twain who took up residence between 1904 and 1908 in the Gothic-revival town house located on the southeast corner of Fifth Avenue and East 9th Street. (That house had been built in 1870 by James Renwick, architect of nearby Grace Church and St. Patrick’s Cathedral, completed in 1878.) In 1954, the entire block, including the hotel and Mark Twain’s townhouse, was razed to make way for the 19-story Brevoort apartment building.

“Lucky Lindy” and the Spirit of St. Louis landed at Curtis Field on Long Island from California on May 12, 1927. En route, pilot and plane set a new record for the fastest United States transcontinental flight. Eight days later, Lindbergh took off for Paris from New York’s Roosevelt Field. Fighting fog, icing, and sleep deprivation, Lindbergh landed safely at Le Bourget Field in Paris at 10:22 PM on May 20, 1927 – and a new aviation hero was born. The plane had carried him over 3,600 miles in under 34 hours and won the $25,000 Orteig prize.

The first trans-Atlantic flight heralded the “Lindbergh Boom” in aviation. Aircraft industry stocks rose in value, and interest in flying skyrocketed. During Lindbergh’s subsequent U.S. tour and goodwill flight to Central and South America, the flags of the nations he visited were painted on the cowling of his plane. At the invitation of Chief Executive Officer Juan Trippe, he then joined Pan Am World Airways. Trippe recalled that he was present at Roosevelt Field when Lindbergh started his history-making flight.

Conversely, Raymond Orteig is all but forgotten. His Lafayette Hotel (known as the Hotel Martin from 1863 to 1902, when Orteig acquired and rechristened it) was patronized by international celebrities who were drawn by its French food and service. When the Brevoort faltered in 1932 during the Great Depression (as did so many other hotels), Orteig sold it and nurtured the Lafayette through the depression. In 1953, the Lafayette was demolished for a modern apartment building, the six-story Lafayette Apartments at University Place and 9th Street.

Advancing public interest and aviation technology, the Prize occasioned investments many times the value of the prize. In addition, lives were lost by men who were competing to win the prize. Six men died in three separate crashes. Another three men were injured in a fourth crash. During the spring and summer of 1927, 40 pilots attempted various long-distance over-ocean flights, leading to 21 deaths during the attempts. For example, seven lives were lost in August 1927 in the Orteig Prize-inspired $25,000 Dole Air Race to fly from San Francisco to Hawaii.

1927 saw a number of aviation firsts and new records. The record for longest flight distance, and longest overwater flight were set and all exceeded Lindbergh’s effort. However, no other flyer gained the fame that Lindbergh did for winning the Orteig Prize.

The Orteig Prize inspired the $10 million Ansari X Prize for repeated suborbital private spaceflights. Similar to the Orteig Prize, it was announced some eight years before it was won in 2004.