Home/Nobody Asked Me, But… No. 215: Hotel History: The TWA Hotel 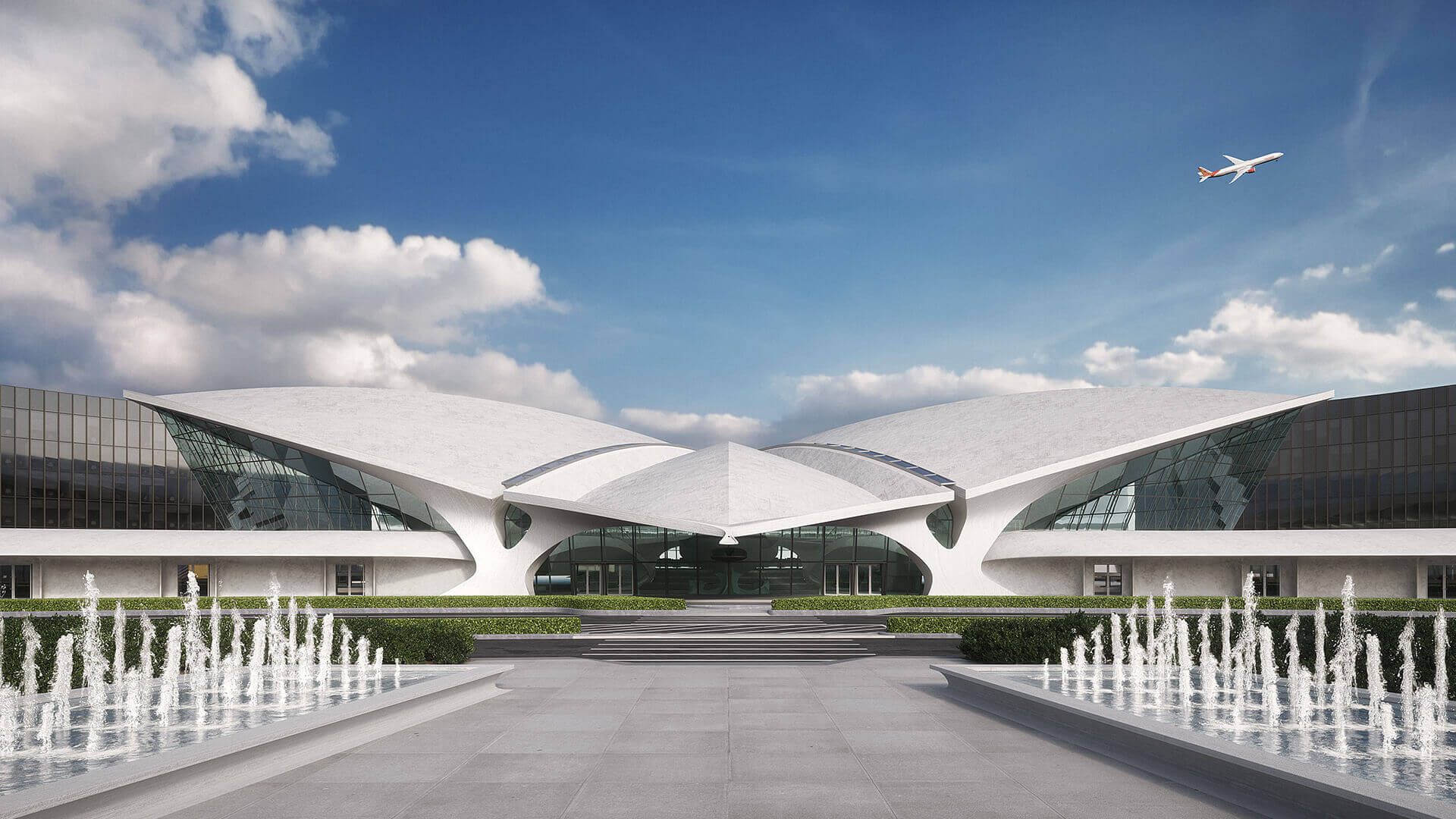 Saarinen was born in 1910 in Finland and emigrated to the United States in 1923. He started his career with an apprenticeship with his father – the prolific Art Deco architect Eliel Saarinen – and went on to become one of the most important architects of the 20th century. Working mainly in the U.S., he created many dramatically different structures:

The TWA Flight Center terminal was one of several Saarinen projects completed after his death in 1961. This brilliant opus magnum took the shape of a large bird embodying a sense of fantasy and science fiction.

In 1994, the original TWA terminal was declared a city landmark by the New York City Landmarks Preservation Commission which prevented its demolition. In 2005, the National Park Service listed it on the National Register of Historic Places.

In addition to the 512 guestrooms the two new buildings contain 50,000 square feet of meeting space, six restaurants, an aviation history museum, a rooftop infinity pool, an observation deck, a 10,000 square foot fitness center and a Lockheed Constellation L-1649A airliner transformed into a cocktail lounge. There are 4,000 parking spaces and an Air Train to other JFK terminals.

Travelers who are passing through JFK can choose a view of either the runway or the Saarinen landmark. The hotel’s website promises that the rooms are “ultra-quiet” thanks to thick glass walls. But it costs nothing to walk in and enjoy the dramatic interior of the original main terminal, now the hotel’s lobby.

Other amenities include Shinola and Warby Parker stores, an Intelligentsia Coffee location, and a restaurant by chef Jean-Georges Vongerichten.

The hotel is full of period furniture designed by Warren Platner, Isamu Noguchi, and Raymond Loewy as well as Saarinen. The renovation team focused on design details so closely that it hired the graphic-design firm Pentagram to create a new custom typeface for the hotel, based on the lettering that Saarinen originally used in the terminal. Many of the TWA Flight Center’s original details, such as the ceramic floor tiles and the 486 variously-shaped window panels have been replaced with replicas of the originals. These details are intended to give the hotel a 1960s- era vibe along with brass lighting, walnut-accented furnishings and rotary phones. The large departure board, a split-flap display made in Italy by the Solari Company which has been a feature of the building since the Flight Center’s opening in 1962, was fully restored as part of the hotel project.

The current project is a public-private partnership between MCR and Morse Development, Jet Blue and the Port Authority of New York and New Jersey. It was privately funded with no government subsidies. The re-creation, overseen by Beyer Blinder Belle Architects & Planners, not only turned the historic terminal into a hotel lobby but added two wings (designed by Brooklyn-based Lubrano Ciavarra Architects) for the property’s guestrooms and a 50,000 square foot events center. The most important element of the projects design, said Ciavarra, was respecting the symmetrical design of the Saarinen building as 21st century elements were added. “Visitors and guests to the hotel will be able to enjoy the experience of the Saarinen building as it was originally designed and then move through the flight tubes into our new hotel buildings.”

If You Need an Expert Witness:
For the past twenty-seven years, I have served as an expert witness in more than 42 hotel-related cases. My extensive hotel operating experience is beneficial in cases involving: