Nobody Asked Me, But… No. 230: Hotel History: Four Seasons Hotel

Home/Nobody Asked Me, But… No. 230: Hotel History: Four Seasons Hotel

Nobody Asked Me, But… No. 230: Hotel History: Four Seasons Hotel 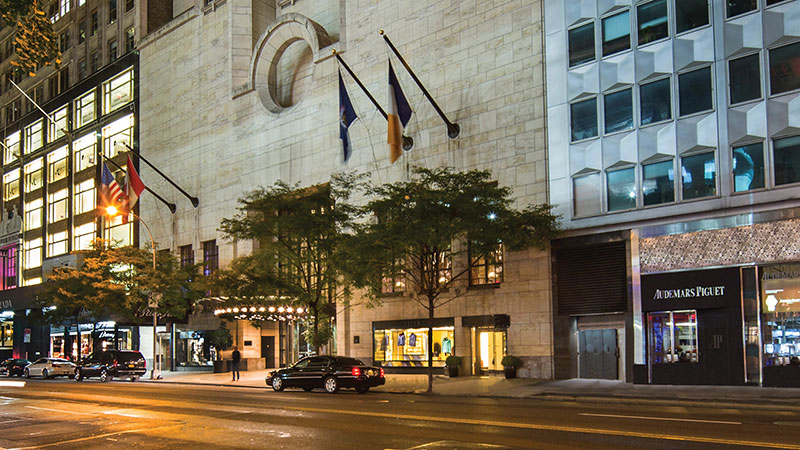 Is it possible to conceive that the Four Seasons Hotel in New York has been converted to house medical professionals battling the coronavirus? In late March, the five-star Four Seasons Hotel located on East 57th Street began to accept hospital employees who work in mid-Manhattan.

This I.M. Pei-designed hotel was surely the most talked-about new hotel in New York when it opened in 1993 at a cost $1 million per room. This 52-story, 367 room building with its limestone-clad lobby, 33-foot-high onyx ceiling, glowing wall sconces and original paintings provided grandeur and elegance that was immediately observed.

“…. The guest rooms share the qualities of the public rooms but are done in a lusher, softer modern style. They represent a big change for the Four Seasons chain, which has tended to believe that the elegance of a hotel room is in direct proportion to the amount of imitation English furniture it contains. Here, there is an urbane modernism, sophisticated without being at all cold….

And that gets us to the essential fact of this building, which is how wonderfully it combines the aura of a major hotel with the intimacy of a small one. This hotel’s architecture sends us every cue that it is a grand hotel, from the immense scale of the main entrance to the tall tower’s sculpted presence on the skyline. There is no cozy domesticity at the Four Seasons, no coy attempt, as at so many luxury hotels, to pretend that this is just a fancy apartment house that happens to have a check-in desk. No, this is a Major Public Place…. And in an age when almost every new luxury hotel seems to be parading domesticity, a hotel that presents itself as a shimmering and urbane presence is a great thing to happens to New York.”

“This is not a hotel anymore,” said Dr. Robert Quigley, the senior vice president and medical director for International SOS, a medical and travel securities firm that is overseeing the hotel’s new protocols. “It’s housing for a high-risk population.”

The Four Seasons, just like nearby Central Park and the USTA Billie Jean King National Tennis Center in Flushing, Queens is yet another city landmark being retrofitted to fight the pandemic. Although other hotels in the city are helping with hospital bed overflow, the Four Seasons has dedicated itself exclusively to keeping doctors, nurses and other medical professionals well rested and safe.

At the entrance on 57th Street, two nurses, wearing N95 masks, take the temperature of all guests, asking questions about symptoms over the past 72-hours and if they’ve washed their hands. Once inside, guests go straight to their rooms; there is no bar or restaurant. Elevators carry one passenger at a time; others must wait on taped Xs on the floor, placed six feet apart. Of the hotel’s 368 rooms, only 225 will have guests, to limit crowding on the property.

Guest and hotel staff members no longer interact. For check-in, keys are placed in envelopes on a table. Minibars have been removed from guest rooms. Housekeeping is an amenity of the past; rooms are provided with extra linens and towels. Dirty items are collected only after guests, who stay for a minimum of seven days, check out their rooms have been fumigated. Beds no longer have decorative pillows which can spread germs. On every nightstand there is a bottle of sanitizer instead of a piece of chocolate.

The idea to convert the Four Seasons was owner Ty Warner’s idea. In a few days, General Manager Rudy Tauscher helped a new team plan the emergency residence in a few days with reinvented planning and operations. Elizabeth Ortiz, the hotel’s personnel director, started daily call arounds to ensure that every employee is getting to work Ok and is feeling Ok. But despite the careful planning, the hotel was unprepared for what happened after Governor Andrew Cuomo and Mr. Warner announced that the Four Seasons would reopen for medical professionals. Thousands of doctors and nurses swarmed the phone lines. “It totally overwhelmed the ordinary systems in place” said Grey Scandaglia, Mr. Warner’s lawyer. After the initial confusion, the hotel is now working with New York hospitals and medical associations including the New York State Nurses Association, which are handling reservation requests internally.

Dr. Quigley suggested that other vacant properties could follow the Four Seasons model soon. “I’ve gotten multiple calls from multiple hotels around this country and the world to replicate what we did,” he said. “Now we have a benchmark.”