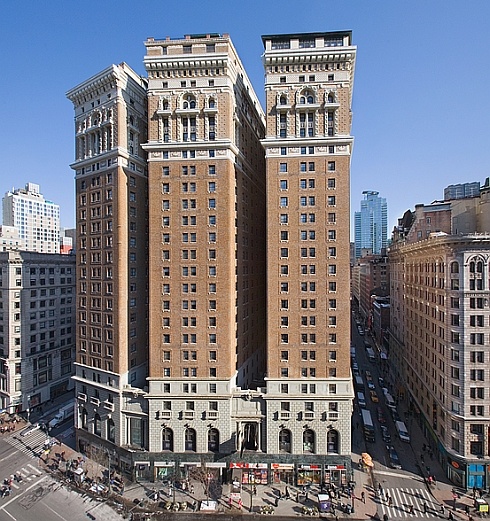 The Hotel McAlpin was constructed in 1912 by General Edwin A. McAlpin, son of David Hunter McAlpin. As well as being the world’s largest hotel, it was also one of the most luxurious. The amenities were as breathtaking as they were opulent including a massive Turkish bath and plunge pool on the 24th floor. The hotel also had its own in-house orchestra, as well as its own fully-equipped hospital.

When construction of the Hotel McAlpin neared completion by the end of 1912 as the largest hotel in the world, The New York Times commented that it was so tall at twenty-five stories that it “seems isolated from other buildings.” Boasting a staff of 1,500, the hotel could accommodate 2,500 guests. It was built at a cost of $13.5 million ($358 million today). The hotel was designed by noted architect Frank Mills Andrews whose design included two gender-specific floors: women checking into the hotel could reserve a room on the women’s-only floor, bypass the lobby and check in directly on their own floor. Another floor, dubbed the “sleepy sixteenth”, was designed for night workers which was kept quiet during the day. The hotel also had its own travel agency.

The McAlpin underwent an expansion half a decade later. The owners had purchased an additional fifty feet of frontage on Thirty-Fourth Street two years early. The new addition was the same height as the original twenty-five story building, and provided an additional two hundred rooms, four more elevators, and a large ballroom. A major refurbishment costing $2.1 million was completed in 1928 refreshing all the rooms, installing modern bathrooms and updating the elevators.

The McAlpin family sold the hotel in 1938 to Jamlee Hotels, headed by Joseph Levy, president of Crawford Clothes, a prominent real estate investor in New York for $5,400,000. Jamlee reportedly invested an additional $1,760,000 in renovations. During the Jamlee ownership, the hotel was managed by the Knott Hotel Company until 1952 when management was taken over by the Tisch Hotel Company. On October 15, 1954, Jamlee sold the hotel to the Sheraton Hotel Corporation for $9,000,000 and it was renamed the Sheraton-McAlpin. Sheraton completely renovated the hotel five years later and renamed it the Sheraton-Atlantic Hotel on October 8, 1959. Sheraton sold the hotel to the investing partnership of Sol Goldman and Alexander DiLorenzo on July 28, 1968 for $7.5 million and it reverted to the Hotel McAlpin name. Sheraton briefly reacquired the hotel in 1976, through a default by the buyers, and quickly sold it to developer William Zeckendorf, Jr. who converted the McAlpin to 700 rental apartments and named it the Herald Square Apartments.

On Christmas Eve 1916, Harry K. Thaw, former husband of Evelyn Nesbit and the murderer of architect Stanford White, attacked 19-year-old Fred Gump, Jr., in a large suite on the 18th Floor. Thaw had enticed Gump to New York with a promise of a job but instead sexually assaulted him and beat him repeatedly with a stocky whip until he was covered in blood. According to the New York Times, Thaw had rented two rooms on either side of his suite to muffle the screams. The next day, Thaw’s bodyguard took Gump to the aquarium and zoo before the boy managed to escape. Gump’s father sued Thaw for $650,000 for the “gross indignities” that his son suffered. The case was eventually settled out of court.

In 1920, The McAlpin Hotel hosted what may have been the first broadcast from a New York hotel. The Army Signal Corps arranged the broadcast by singer Luisa Tetrazzini from her room in the hotel. Tetrazzini (1871-1940) was an Italian lyric coloratura soprano who had an enormous popularity in America from the 1900s-1920s. In 1922, the McAlpin became one of the first hotels to link ship-to-shore radios with their phone system. The hotel would later be the first to give the call letters of radio station WMCA in 1925.

In 1947, Jackie Robinson, a resident living on the 11th floor, received the phone call from the Brooklyn Dodgers that would change America forever by becoming the first African American player on a Major League Baseball team.

The hotel’s Marine Grill was considered one of the more unusual interiors in the city of New York due to “an expansive grotto of exquisite polychrome terra cotta designed by artist Frederick Dana Marsh.” In the 1970s, the building owner had closed the restaurant and historic preservationists were concerned with the future of the artwork. Their worst fears were realized when Susan Tunick, president of the non-profit Friends of Terra Cotta, saw dumpsters outside the hotel filled with fragments from the murals. Rescue efforts were eventually successful when the murals were reassembled under the oversight of the MTA Arts for Transit Program and they were reassembled piece by piece like a giant jigsaw puzzle over one summer by a group of college interns. In 2000, the restored murals were installed at the Fulton Street Station, along with the ornate iron gate that had adorned the entrance to the Marine Grill.

In the late 1970s, the building was converted to 700 rental apartments and in 2001 to condominiums. It now operates under the name Herald Towers.