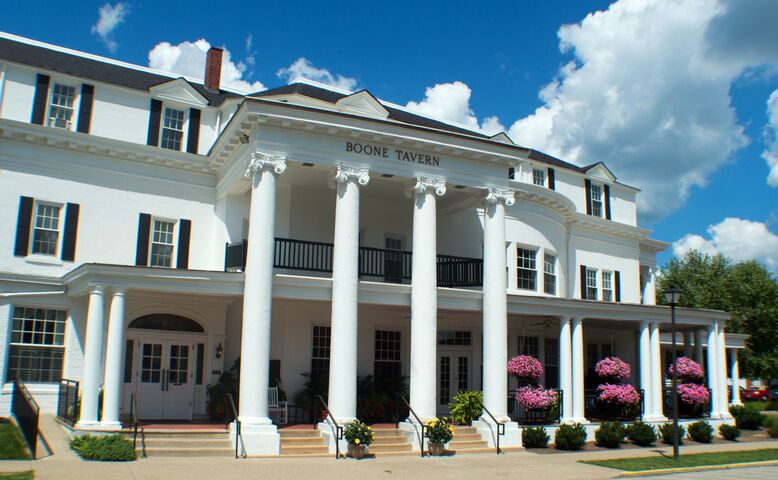 Built on the old Dixie Highway and named after Kentucky explorer Daniel Boone, the historic Boone Tavern Hotel is located on College Square in Berea, Kentucky.  The hotel is owned by Berea College and operated with student workers from the College Labor Program. Students earn money for books, room and board but pay no tuition (valued at $25,500 per year), thanks to the generosity of donors who support Berea College’s mission of providing a free high quality education for students primarily from Appalachia who have high academic potential and limited financial resources.

Berea College was founded in 1855 by abolitionists John Gregg Fee and Cassius Marcellus Clay* as a liberal arts work college which charges no tuition. Berea was the first college in the southern United States to be coeducational and racially integrated. It has a full-participation work-study program where students are required to work at least 10 hours per week in campus and service jobs in over 130 departments.

In 1866, Berea’s first full year after the Civil War, it registered 187 students (96 African Americans and 91 whites) who took preparatory study classes to ready them for college-level courses. In 1869, the first college students were admitted and the first bachelor’s degrees were awarded in 1873.

In 1904, the Kentucky state legislature’s passage of the “Day Law” disrupted Berea’s interracial education by prohibiting education of black and white students together. The college challenged the law in state court and further appealed to the U.S. Supreme Court in Berea College v. Kentucky. When the college failed, the college had to become a segregated school, but it set aside funds to help establish the Lincoln Institute near Louisville to educate black students. In 1925, famed advertiser Bruce Barton, a future congressman, sent a letter to 24 wealthy men in America to raise funds for the college. Every single letter was returned with a minimum of $1,000 in donations. In 1950, when the law was amended to allow integration of schools at the college level, Berea promptly resumed its integrated policies.

Boone Tavern Hotel features 63 guestrooms furnished with hand-made early American furniture made by Berea students in the College woodcraft shop. The Boone Tavern Restaurant is so well known for its long-standing tradition of excellent food that in 2003 it received the Duncan Hines Excellence in Hospitality Award. The Tavern’s spoonbread, a corn meal-based concoction, is so beloved, that the city holds an annual Spoon bread Festival.

In order to support its extensive scholarship program, Berea College has one of the largest financial reserves of any American college when measured on a per-student basis. The endowment stands at $950 million, down from its 2007 height of $1.1 billion. The base of Berea College’s finances is dependent on substantial contributions from individuals, foundations, corporations that support the mission of the college and donations from alumni. A solid investment strategy increased the endowment from $150 million in 1985 to its current amount.

Before the Civil War, Cassius Marcellus Clay wrote “For better or worse, the black people are among us… We must educate them, for one day they will be part of our governing society.”