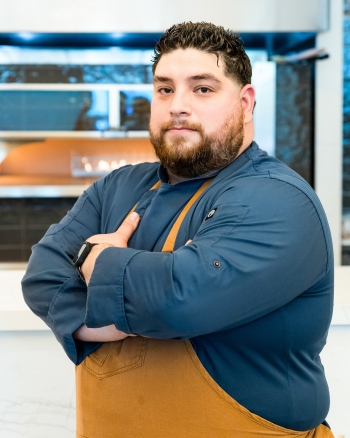 Executive Chef Mario Ventura is a seasoned chef showcasing inspiring cuisine that reflects his 18-year realm in culinary arts. His dishes are not only delicious, but innovative and sleek with modern presentations.
As the executive chef of The Westin Tempe in Tempe, Ariz., where he opened the hotel as the executive sous chef, Ventura has built a structured culinary team that upholds the highest standards of food quality. His career has led him to work within some of the most prestigious hotels and resorts, casinos, country clubs and restaurants across metro Phoenix.

Ventura studied culinary arts at Le Cordon Bleu Scottsdale, where he trained and honed classical and avant-garde techniques, earning an associate degree for his craft. After completing his time at Le Cordon Bleu, Ventura was exposed to the amazing world of hospitality, where he spent time in luxurious hotel brands such as Four Seasons, Fairmont, Omni and The Luxury Collection with Starwood Hotels across Arizona. Chef Ventura accrued the knowledge of running multiple kitchens with more than 80 staff members, that also generated revenues of $55 million just in food and beverage alone.

In his current role, Ventura led his team to the No. 1 ranking Westin of 130 worldwide for Sales and Banquets Food Quality for the Guest Satisfaction Survey.

For more information about Terra Tempe or to book a reservation, please visit TerraTempe.com.

About The Westin Tempe

As the newest hotel to debut in Tempe, Ariz., The Westin Tempe is a sophisticated destination that offers a distinct, premium guest experience incorporated into every aspect of the hotel’s design, services and amenities. Centrally located in the city’s downtown district, the contemporary hotel blends Tempe’s vibrant atmosphere and unique local culture with the brand’s Wellness at Westin pillars of well-being and numerous biophilic elements throughout its 18 stories, 290 spacious guest rooms and suites, and approximately 21,000 square feet of indoor and outdoor event space. The hotel also features a signature restaurant Terra Tempe Kitchen + Spirits, offering cuisine that evokes a fresh spirit of the Southwest through the use of local, seasonal ingredients and flavors; the chic Skysill Rooftop Lounge, the Valley’s highest open-air rooftop bar and lounge on the 18th floor that boasts its own curated menu of shareable plates and craft cocktails with panoramic city and mountain views; and Cup of Joe Market Café, a friendly and relaxed quick-service café with grab-and-go options. As the latest addition to the city’s bustling corridor, The Westin Tempe is just steps from some of the area’s best shopping, dining, nightlife and, entertainment destinations, plus local landmarks like Tempe Town Lake, “A” Mountain (Hayden Butte), Mill Avenue District and Tempe Beach Park. To learn more, visit https://www.marriott.com/hotels/travel/phxwt-the-westin-tempe/.

Located on the ground-level of The Westin Tempe, Terra Tempe Kitchen + Spirits features healthy, Modern-American cuisine under the direction of Executive Chef Mario Ventura. Cleverly combining bold, rustic flavors with locally sourced ingredients, Terra Tempe’s menu offers an authentic reflection of the Southwest’s rich history, while its innovative beverage program boasts local brews, an impressive wine list and hand-crafted cocktails that blend native Arizona flavors with familiar favorite recipes. The restaurant and bar’s contemporary interiors afford a chic atmosphere that embodies the warm, inviting quality of the surrounding neighborhood while still maintaining a sense of intimacy, with subdued lighting throughout, an expansive exhibition kitchen, and sleek sculptural elements like a striking, copper “veil” suspended from the ceiling and a prominent liquor tower that acts as both a beacon and a gathering place. Open for breakfast, lunch and dinner, Terra Tempe is situated in the heart of downtown Tempe, making it the ideal destination to enjoy an elevated dining experience in a comfortable setting before heading to ASU Gammage for a live performance or to Sun Devil Stadium to root for Arizona State University’s Sun Devils. For more information, visit TerraTempe.com.