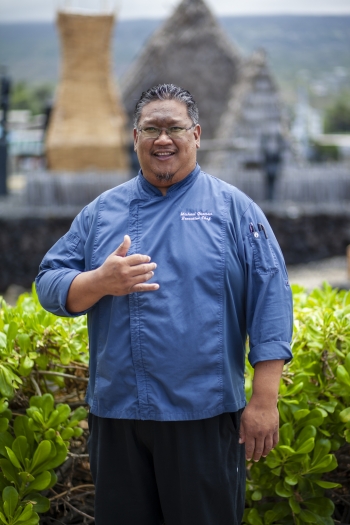 KAILUA-KONA, Hawaii (July 12, 2022) — King Kamehameha’s Kona Beach Hotel has announced the appointment of Michael Quanan to the role of executive chef, where he will be responsible for leading culinary operations for the 455-room, culturally rich hotel. Born and raised on the Island of Hawaii, Chef Quanan brings a new level of cultural expertise and creativity to the menus and culinary programming at Kona Beach Hotel, including at Billfish Poolside Bar & Grill and Honu’s on The Beach, as well as leading menu development for the acclaimed Island Breeze Luau and the property’s catering department.

“We’re honored to welcome Michael to our ‘ohana’ here at King Kamehameha’s Kona Beach Hotel, where his presence and leadership has been felt immediately among our team,” said General Manager Edward Braunlich. “Not only does his impeccable experience and strong passion for Hawaiian culture shine through his culinary creations, but his dedication for mentoring each individual on the team will only further strengthen our program, continuing to establish Kona Beach Hotel as a top dining destination on the island.”

Quanan’s impressive culinary career began at standout hotels and destinations on the Island of Hawaii, such as Mauna Kea Beach Hotel, Charthouse and Nanea Golf Club. He also served as produce manager at the Suisan Company, where he worked closely with local farmers and growers to craft menus with produce sourced almost entirely from local growers. Prior to joining King Kamehameha’s Kona Beach Hotel, Quanan also served as executive sous chef at Hapuna Beach Prince Hotel, where he spent six years, before joining the team at Sheraton Kona Resort and Spa as executive chef. Most recently, Quanan served as director of operations for the Flying Food Group in Kailua-Kona.

In his role as executive chef at King Kamehameha’s Kona Beach Hotel, Quanan will bring his innovation and strong relationships with local farmers and purveyors to the property, leading various dining outlets and curating specialty culinary events, while providing authentic, exceptional service to guests and visitors.

Experience the Big Island like never before at King Kamehameha’s Kona Beach Hotel. The culturally rich resort encompasses the land where King Kamehameha the Great peacefully governed after uniting all the Hawaiian Islands under his rule, and sits on 13 idyllic beachfront acres adjacent to the Kailua Pier. Set on a picturesque white sand beach, the beachfront hotel was renovated in November 2020 and features 455 contemporary guest rooms and suites with stunning water views, an infinity pool, oceanfront restaurants, an onsite day spa with daily sunrise yoga, and the #1-rated luau on the Big Island. With adventures and activities fit for any traveler only steps away from the hotel, guests are invited to set sail, kayak, scuba-dive, paddleboard or even challenge themselves to the famous IRONMAN® World Championship Swim Course alongside the pier. Throughout the hotel, visitors will find an endless array of history and culture, including the largest single collection of work from renowned Hawaiian Historian and Artist Herb Kawainui.