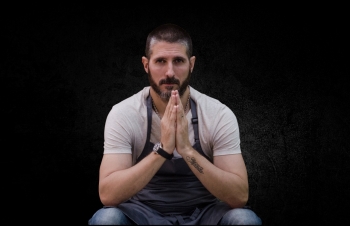 COLUMBUS, OH (June 2, 2022) – Hilton Columbus Downtown has named globally-renowned Chef Sebastian La Rocca, as Executive Chef of Restaurants for FYR, Spark, and Stories on High, the three-anchor food and beverage concepts set to open this fall as part of the hotel’s second tower expansion. Hilton Columbus Downtown will be the largest hotel in Ohio, with 1,000 rooms.

Born in Argentina with Italian roots, Chef La Rocca’s illustrious background includes working with some of the world’s most distinguished chefs at Barbecoa London by Jamie Oliver and Zodiac UK by Michael Roux. During Chef La Rocca’s tenure, both restaurants were each awarded two AA Rosettes and the Michelin guide distinction.
Chef La Rocca will bring his unique Latin American culinary style and flair to the wood-burning grill at FYR. Accessible from High Street, FYR will provide a spirited affair of dishes and complementing cocktails. The majority of the menu at FYR will be cooked over a wood-burning oven, as fire is the oldest and arguably most meticulous method of cooking. FYR will feature an approachable American menu with Latin influence and a monthly, chef-driven tasting menu that will include suggested drink pairings alongside locally sourced, seasonal ingredients. The specialty cocktail program at FYR will feature brighter notes and ingredients that pair perfectly with the smoky flavors found in each dish. The wine program will center around highly curated selections, while the beer program will range from lighter to more elevated options and offer a heavy representation of local brews.

Located 28 stories above High Street, Stories on High will be the tallest rooftop bar in Columbus, boasting two outdoor terraces offering expansive 360-degree views of the city. Guests can expect a swanky, cocktail-forward food and beverage offering where each carefully-crafted drink threads together its own story through the marriage of unique ingredients. The venue will feature an extensive wine list, a signature cocktail program, and sophisticated bar bites and small plates with a Japanese influence, such as yakitori, fresh sushi rolls, and wagyu sliders.

“To create a truly elevated dining experience for guests and locals alike, we need the culinary talent that can bring that vision to life,” said Christian Coffin, general manager, Hilton Columbus Downtown. “Chef La Rocca brings with him a distinguished experience uniquely suited for FYR and Stories on High and his dynamic personality will be enticing to young culinarians looking to learn to cook with live fire. Under Chef La Rocca’s leadership, we look forward to our new concepts becoming the most talked-about restaurants in downtown Columbus.”

In addition to overseeing FYR and Stories on High, Chef La Rocca will oversee Spark, located on the lobby level, featuring a Midwest-driven menu with classic cocktails and local brews, ideal for an after-work drink or quick bite following a meeting at the Greater Columbus Convention Center.

“As someone who has lived and traveled all over the world, I’ve seen first-hand how food can be a catalyst that breaks down barriers and brings people and communities together,” said Chef La Rocca. “I’m looking forward to building relationships in the community with local suppliers as menus at all of our venues will feature signature ingredients that spotlight the rich, agricultural heritage of the Midwest.”

Most recently, Chef La Rocca was chef and owner of the Eat Gastro Group in Costa Rica, featuring four distinct restaurants. Botaniko, anchored by a wood-burning grill similar to FYR, was recognized by San Pellegrino in 2021 as one of The World’s 50 Best Discoveries, a first in Costa Rica. It also received the honor of being named part of the Top 19 Restaurants in Central America by the New Worlder Guide, and among the top 10 percent of restaurants worldwide by TripAdvisor. His extensive background also includes his work as a chef at distinguished international properties, including Four Seasons Costa Rica, El Mangroove Autograph Collection Costa Rica, Faena Hotel Buenos Aires, and Hanbury Manor by Marriott Hertfordshire UK.

Working alongside Chef La Rocca at Hilton Columbus Downtown will be Executive Banquet Chef Todd Goodwin and Pastry Chef Brian Wildroudt. Chef Goodwin has served in his position at Hilton Columbus Downtown for three years where he brought a seasoned culinary background to his role, previously serving as an executive chef in some of Columbus’ most well-known kitchens. Chef Wildroudt also brings a background of pastries into his role, previously having served as an executive pastry chef at Tupelo Donuts in Columbus.

Hilton Columbus Downtown, located within the Short North Arts District, is within walking distance of over 300 dining and entertainment venues with direct access to the Greater Columbus Convention Center and nearby Nationwide Arena and North Market. Set to become the largest hotel in Ohio in the fall of 2022 following a second tower expansion, Hilton Columbus Downtown will debut three new restaurants, including a signature restaurant with a wood-burning grill and the tallest rooftop bar in the city.

Hilton (NYSE: HLT) is a leading global hospitality company with a portfolio of 18 world-class brands comprising more than 6,800 properties and more than 1 million rooms, in 122 countries and territories. Dedicated to fulfilling its founding vision to fill the earth with the light and warmth of hospitality, Hilton has welcomed more than 3 billion guests in its more than 100-year history, earned a top spot on the 2021 World’s Best Workplaces list and been recognized as a global leader on the Dow Jones Sustainability Indices for five consecutive years. In 2021, in addition to opening more than one hotel a day, Hilton introduced several industry-leading technology enhancements to improve the guest experience, including Digital Key Share, automated complimentary room upgrades and the ability to book confirmed connecting rooms. Through the award-winning guest loyalty program Hilton Honors, the nearly 128 million members who book directly with Hilton can earn Points for hotel stays and experiences money can’t buy. With the free Hilton Honors app, guests can book their stay, select their room, check in, unlock their door with a Digital Key and check out, all from their smartphone. Visit newsroom.hilton.com for more information, and connect with Hilton on Facebook, Twitter, LinkedIn, Instagram and YouTube.

For over a century, Hilton Hotels & Resorts has set the benchmark for hospitality around the world, providing new product innovations and services to meet guests' evolving needs. With nearly 600 hotels across six continents, Hilton Hotels & Resorts properties are located in the world’s most sought-after destinations for guests who know that where they stay matters. Experience a positive stay at Hilton Hotels & Resorts by booking at hiltonhotels.com or through the industry-leading Hilton Honors app. Visit newsroom.hilton.com for more information, and follow Hilton on Facebook, Twitter, and, Instagram.