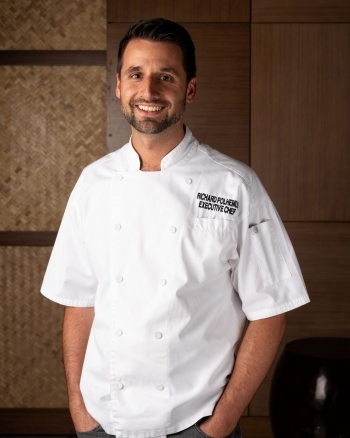 “My entire career has been grounded in a farm-to-table approach,” says Richard Polhemus. “I’ve always let nature and seasonality guide the creation of my menus. Using local ingredients, curating relationships with purveyors, and embracing the skill of butchery and the nose-to-tail approach has been key to my culinary philosophy.”

At Four Seasons Resort Hualalai, 75 percent of the ingredients used are from Hawai’i Island and are sourced from more than 160 farms. The Island of Hawai’i is unique in that it hosts 11 of the 13 world climates, allowing a wide spectrum of diverse foods to be grown and raised on the island. Chef Polhemus and his team understand the importance and embrace the nuances to working with the multiple farmers and purveyors that provide the local ingredients for the Resort’s restaurants and other dining experiences daily.  On-site at the Resort, an herb garden supplies various fresh herbs and vegetables, and carefully created ponds are home to two types of oysters and shrimp, grown and harvested a stone’s throw from where they are served fresh to guests.

Polhemus began his culinary journey with a degree in Culinary Arts from Kendall College in Chicago, Illinois. Shortly after graduating, he started his first culinary position at Four Seasons Hotel Chicago and worked his way up through the ranks to Sous Chef. During his time in Chicago, the Hotel’s signature restaurant was award one Michelin star. An expert butcher, Polhemus competed in the acclaimed culinary competition Cochon555, showcasing his knowledge and creativity in preparing pork. In 2016, Polhemus moved across the Pacific Ocean to join Four Seasons Resort Oahu at Ko Olina as Executive Sous Chef. He was promoted to Executive Chef one year later.

When he’s not in the kitchen, Polhemus lives an active outdoor lifestyle, and enjoys exploring the diversity of the hiking in Hawaii. Food and wine are true passions, and Polhemus genuinely enjoys expanding his knowledge and experiencing new culinary experiences and cultures.

For more information on the dining options at Four Seasons Resort Hualalai, to view restaurant menus, or to make a Resort reservation click here or call 808 325 8000.