One of Boston’s long-standing traditions, the Boston Marathon, will take place the third week of April this year drawing around 30,000 registered runners, both amateur and professional, and over 500,000 spectators made up of vendors, volunteers, staff, and media from all over the world. Hosted by the Boston Athletic Association (B.A.A.), it is the world’s oldest annual marathon and takes place every Patriots Day, a State Holiday in Massachusetts. The Boston and Cambridge lodging market thrives during the weekend surrounding the Boston Marathon and this year, the 123rd annual, will be no different.

Over time, the Boston Marathon has grown into a four-day event comprised of the John Hancock Sports & Fitness Expo (being held at the Hynes Convention Center this year), a 5k race and a one-mile invitational race, along with many other events held throughout the city for the world’s top marathoners, elite athletes, fitness enthusiasts, and the general public. Additionally, the Boston Red Sox have an annual mid-day game every Patriots Day at Fenway Park, one block from the marathon route at Kenmore Square. These events have helped to lengthen the average stay, attract more visitors, and increase the overall economic impact throughout the region.

In 2013, two homemade bombs were detonated near the finish line on Boylston Avenue killing three people and injuring hundreds more. Soon after, the “Boston Strong” rallying cry spread throughout the country, inspiring and supporting the City as it healed from the events. The following year, the B.A.A. increased its field size by 33% to 36,000 in order to accommodate the increase in demand largely driven by the support from the prior year’s events.

Lodging demand stemming from the marathon is typically a two to four-night stay, from Friday to Tuesday. While most of the lodging demand is accommodated in Boston and Cambridge during the long weekend, there is a considerable amount of demand in the suburban areas, travelers who are either price sensitive or those seeking accommodations with ease of access to the race’s start line and area transportation.

This brief analysis looks at the historic performance of the Boston & Cambridge lodging market over the three days surrounding the Boston Marathon; Saturday, Sunday and Monday nights. Over the last seven years, the market has had an average occupancy of 93% over the three-night period, ranging from 92 to 94%. Between 2012 and 2018, the ADR during these three nights has increased 4.0% on a compound annual basis with fairly significant increases from 2012 to 2014 with slow and steady growth the last four years. In 2018, the three-day weekend had a RevPAR of $319, approximately $100 above the market’s annual performance. 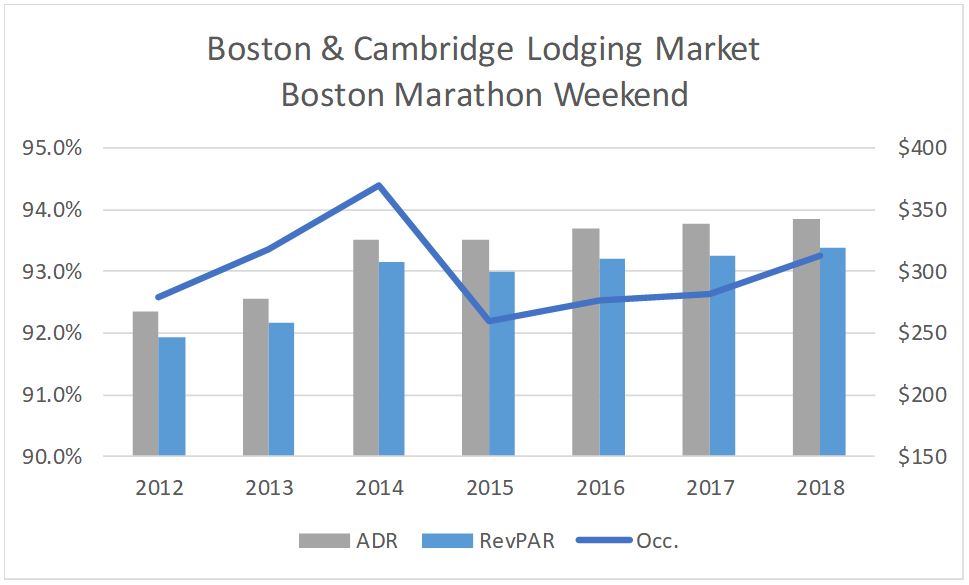 Although occupancy has remained between 92 and 94% the last seven years, demand has increased 2.0% on a compound annual basis during this period, increasing from approximately 60,400 occupied roomnights in 2012 to over 68,000 occupied rom nights in 2018. Following the tragic Boston Marathon bombing in 2013, people from near and far supported the City and those affected by the events. As a result, the Boston Marathon saw an increase in attendance, causing lodging demand to increase 1.6% over the three nights from the prior year and occupancy to reach a peak of 94.4%. Additionally, Easter Weekend overlapped with the Boston Marathon in 2014 (as with 2017) contributing to its increases in demand. With occupancies as high as they are through the weekend, the market is essentially at capacity. As such, much of the demand growth in recent years has been a result of new hotels opening in Boston allowing for those previously staying elsewhere to stay in the city. 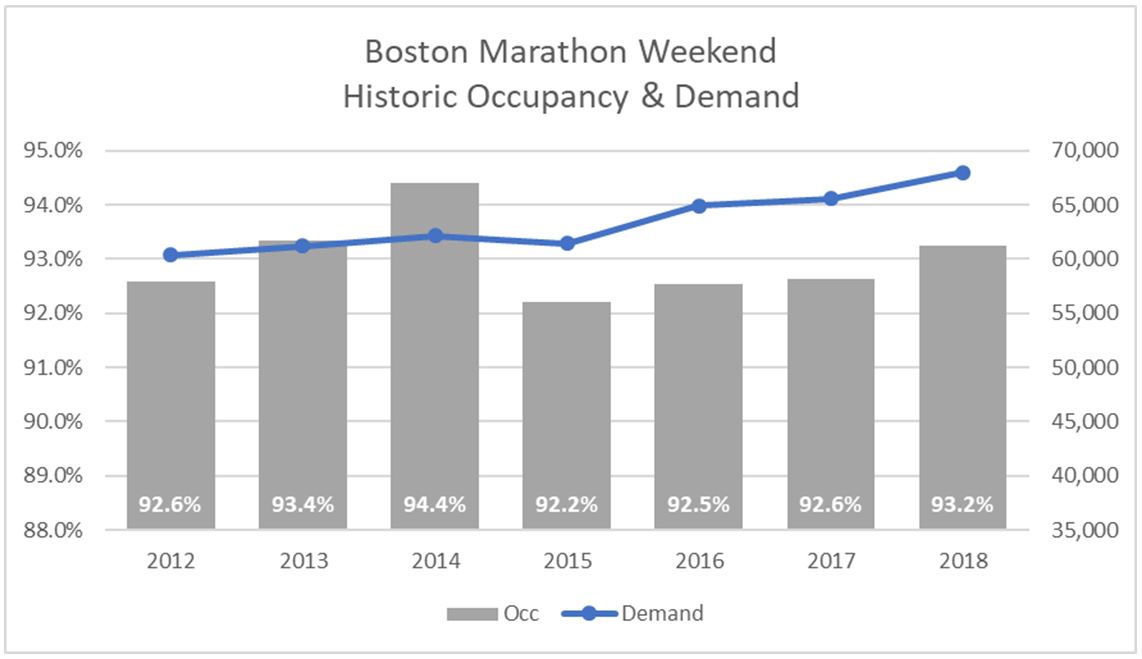 The Boston Marathon weekend is also one of the market’s highest rated weekends of the year. The three-day average daily rate (ADR) has followed similar trends to the overall market since 2012. Increasing at above inflationary levels in 2012 and 2013 with considerable increases in 2014 as a result of its peak occupancies. Market ADR remained flat the following year as demand returned to previous levels. Since this time, ADR over the weekend has grown between 1% and 3% annually. This slower ADR growth in recent years is a result of new supply, both traditional hotel rooms and short-term rentals like AirBnB and HomeAway. 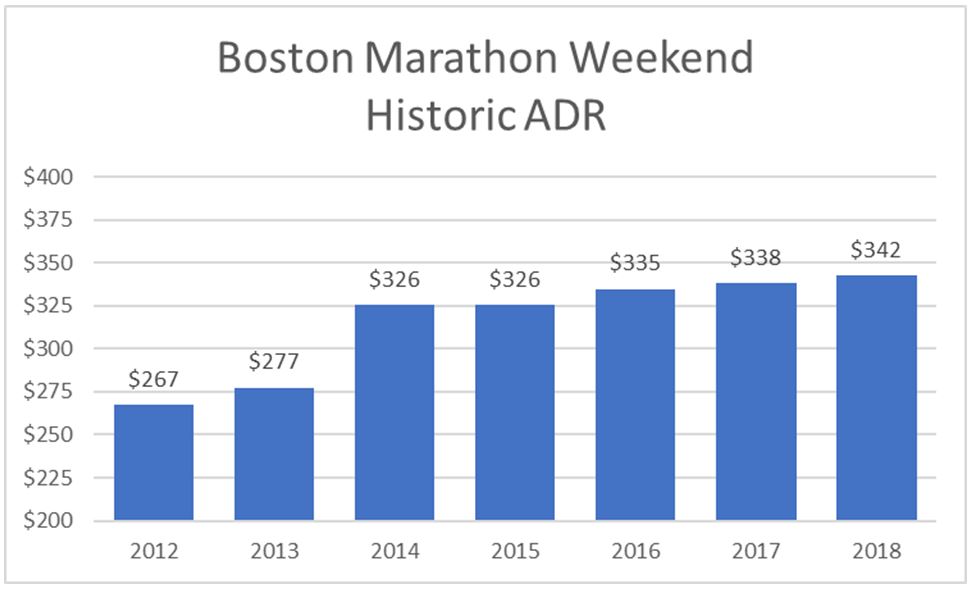 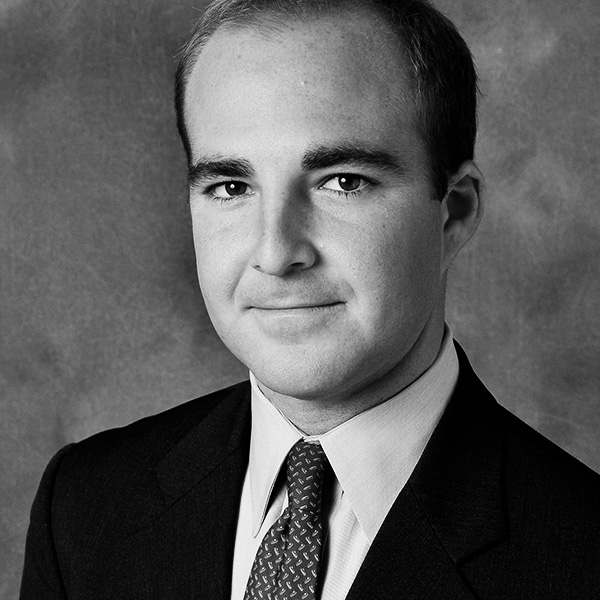 Sebastian J. Colella is a Vice President with Pinnacle Advisory Group based in the Boston office. With over 20 years in the hospitality industry, Mr. Colella leverages his operational knowledge and expertise from experiences in the field. Work with Pinnacle Advisory Group has included market and feasibility analysis, acquisition due diligence, departmental revenue and expense performance evaluations, facility recommendations, brand assessments and impact studies, as well as appraisals of both branded and independent hotels and resorts.