Hotels at Secondary and Tertiary Airports Will Suffer Longer

Home/Hotels at Secondary and Tertiary Airports Will Suffer Longer

Hotels at Secondary and Tertiary Airports Will Suffer Longer

The coronavirus pandemic’s impact on travel is thought to be six or seven times greater than the 9/11 attacks, according to the U.S. Travel Association. Air travel volume fell precipitously through March. The estimated revenue losses by air carriers in 2020 is at least $252 billion. In late March, domestic carriers received a $60 billion bail-out, with some strings attached.

The Department of Transportation issued an order that carriers receiving financial assistance under the Coronavirus Aid, Recovery, and Economic Security Act (the CARES Act) are required to maintain minimum air service to all destinations served as of the last week of February (with some exceptions).

The Show Cause Order stated that in cases where multiple airports serve the same point, covered carriers would not need to maintain service to all airports but would be able to consolidate operations at a single airport serving the point. Due to this caveat, we believe that airport hotels at secondary and tertiary markets will have their occupancies severely impacted and will be among the last to come back.

The definition of “same destination” is being stretched. Despite taking the bail-out:

Frontier, Jet Blue, and Spirit, which are under a slightly different set of rules, are asking for waivers for bigger cuts:

It is uncertain at this time how many waivers the Department of Transportation will issue but as more markets consolidate, the hotels in secondary and tertiary markets will surely be impacted.

The Service Obligation pertains to only U.S. destinations and is scheduled to extend through September 30, 2020, the same date under the CARES Act through which carriers must maintain certain levels of employment. This date may be extended to a later time, for all or portions of covered carriers and covered points.

The latest surveys indicate that air travel, in particular, will be challenged. In recent research for the U.S. Travel Association, 67% of respondents indicated they would take a trip by car in the next 6 months, but only 32% said they would take a domestic flight within that window. International travel was even lower, at only 19% of the respondents planning an international flight within the next 6 months.

Future airline net bookings dropped significantly in the nation over the past few months. According to Kalibri Labs and Forward Keys, airline net bookings through December 2020 in the U.S. hit a low of negative 173.0% for the week of March 16 to March 22 compared to same period last year. The outlook is still grim with negative 107.8% net bookings for the week of April 27 to May 3. Week-over-week overview of net booking trends (including cancellations) for major U.S. destinations through December 2020 is shown below: 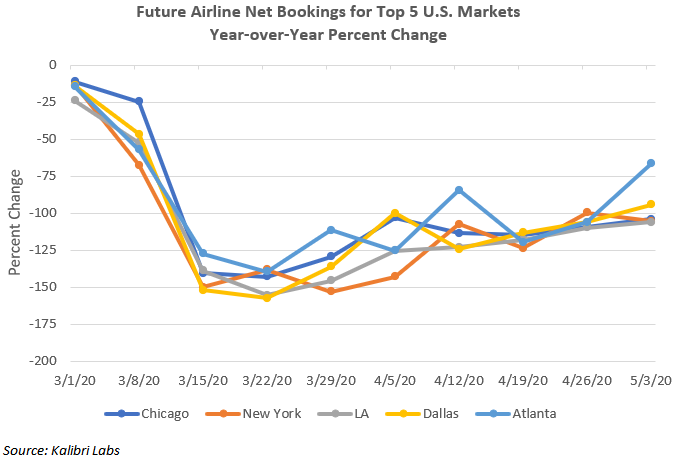 Most analysts believe that the industry will recover by the year 2022, at the latest. But until vaccines and drug treatments are developed, airport hotels, especially those located in the secondary and tertiary markets, will be on a long road to recovery and among the last to recover. 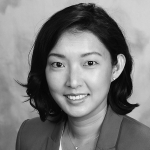 Jenny Lee is a Vice President with Pinnacle Advisory Group West based in Southern California. Prior to joining Pinnacle, Ms. Lee was the founder of Hospitality Research Solutions, and employed at Jones Lang LaSalle, and Economics Research Associates (“ERA” now AECOM). She also has operations experience at the Hilton Anaheim, Westin Bonaventure Hotel, and Anaheim Marriott. Ms. Lee holds a Bachelor of Science degree from the School of Hotel Administration at Cornell University and a MBA from The University of Chicago Booth School of Business.

U.S. Hotel Occupancy Falls Back Below 40% Mark
Hotel Lawyer on PPP2 and the COVID Relief Bill’s Changes to Paycheck Protection Program
WTTC Says New Travel Measures to Curb COVID-19 Should Replace Quarantines
Can Hotels Claim Business Interruption Insurance Due to a Pandemic?
Q&A: Chris Nassetta Reflects on a Challenging 2020 and His Optimism for the Return of the Golden Age of Travel
The Evolving Traveler Journey: 3 Trends Hoteliers Must Address Today
2021 Design Trends for Commercial Buildings Shaped by COVID-19
Tourism Tidbits: Looking Back at The Year That Wasn’t!
The Outlook for Hospitality, Part 4: Technology Vendors Discuss Their Plans for the Future
HospitalityVIEW Q & A With Tom Corcoran: The Hotel Industry in 2021
Survey: Nearly 70% of Americans Will Not Travel for Christmas
Some Denver Area Hotels Dim the Lights and Wait for the Creditors to Come Knocking
Corporate Governance Study: Lodging Boards 2020
The Post-Pandemic Hotel Experience From the Experience Expert
Tourism Tidbits: How to Re-Enchant Tourism
Mind the ‘COVID’ Gap
Virdee and SALTO Systems Partner to Deliver Contactless Arrival and Entry Solutions Across the Built Environment
The Outlook for Hospitality, Part 3: Technology Vendors Reveal the Solutions That are Helping the Industry Recover
Maximizing Guest Revenues Starts With Prearrival Tech
The 2020 Hospitality and Tourism Trends That Will Likely Stay in 2021 and Beyond