Impacts of COVID-19 on the Boston and Cambridge Hotel Industry

Impacts of COVID-19 on the Boston and Cambridge Hotel Industry 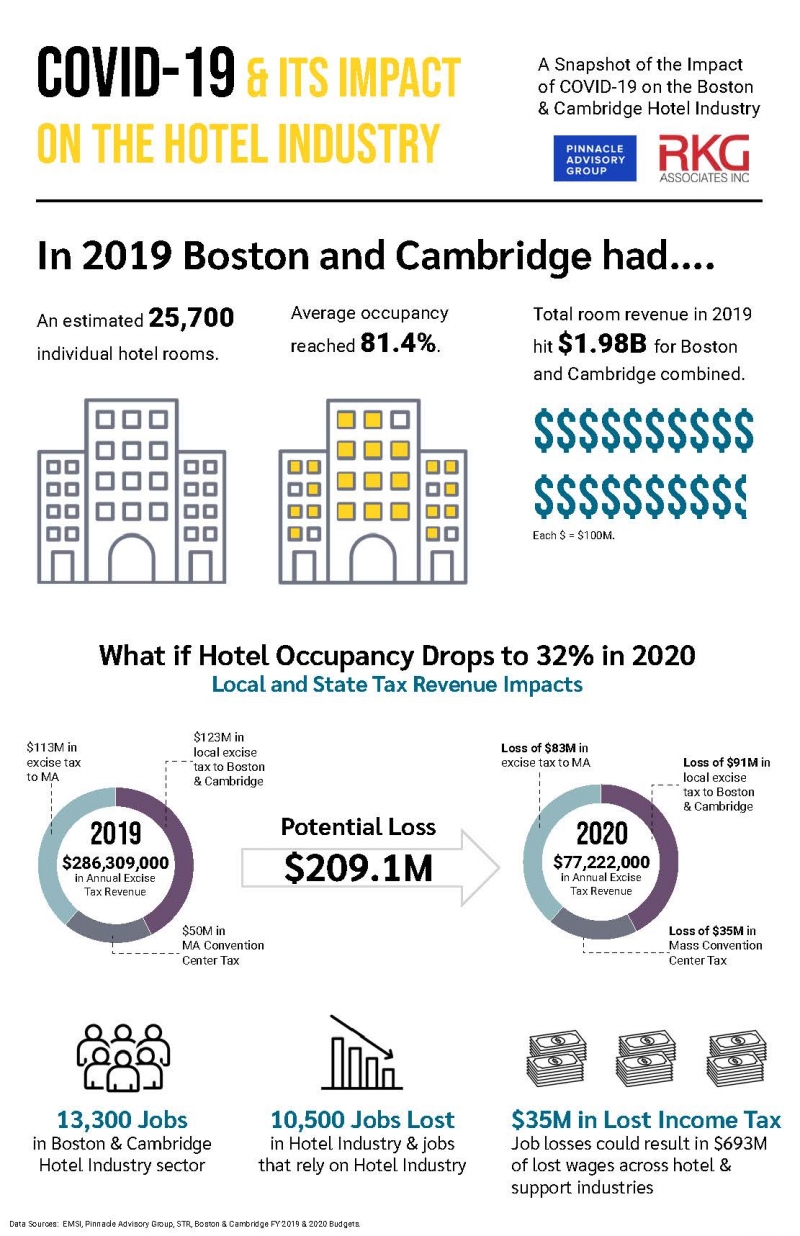 For 2019, Pinnacle Advisory Group estimated that Boston and Cambridge hotels generated nearly $2 billion in rooms revenue, based on a total supply of nearly 25,700 rooms, an average occupancy of 81.4 percent and an average daily rate (ADR) of $259. Over 13,300 people are employed in the hotel industry sector in Boston and Cambridge.  Due to the pandemic and the stay-at-home requirements starting in March of this year, demand for hotel rooms has dropped precipitously. On March 31, Governor Baker began a provision of lodging that was defined as a COVID-19 Essential Service, allowing hotels in the state to service only essential workers and other people with essential status. Occupancy of lodging for leisure, vacation, and other purposes was halted. On June 8, Phase 2 began, allowing hotels to reopen with certain limitations.

According to the Pinnacle Perspective, Revenue Per Available Room (RevPar) declined 98% for May 2020 as compared to the prior year. Hotel occupancy for May 2020 dropped to 6%, and when compared to May 2019 is a decrease of 94%. Hotels in the Back Bay recorded the lowest average occupancy in the Boston/Cambridge market at 1.5% for May 2020. We anticipate hotel occupancy and RevPar to begin increasing in June and July as the Commonwealth continues its phased re-opening plan. While most conferences and events will be extremely limited; offices and work-related travel and leisure visitation are likely to slowly increase.

To estimate the economic impacts, Pinnacle and RKG Associates assumed a worst-case scenario where the annual occupancy rate for 2020 drops to 32 percent and the average daily rate to $175. This assumes that the economy begins to recover in late summer and early fall but does not regain its former strength, including a severe cutback in tourism, conventions, and international visitation – a mainstay of the city’s hotel industry. These impacts were analyzed using EMSI, a leading econometric modeling tool, to determine the direct, indirect, and induced impacts on the two cities and the region’s economy.

Under this scenario, hotel revenues decline by over $1.4 billion and 7,606 hotel jobs would be negatively impacted. Additionally, we estimate another 2,842 jobs in industries that support the hotel sector would also be impacted, resulting in a total of $693 million in lost wages. This in turn would result in a loss of over $34 million in state income taxes.  Massachusetts room excise taxes would decline by $83 million, while Boston and Cambridge would lose nearly $90 million in local option rooms tax. The rooms tax comprises 2.8% of Boston’s annual budget and 2.3% of Cambridge, a shortfall that will need to be made up somewhere else. The Convention Center tax, of 2.75% of room sales, goes to support the Massachusetts Convention Center Authority. This loss is estimated to be just over $35 million.

While a 73 percent drop in RevPar over last year may seem extreme, it is not out of the question, given the length of time it is taking to get the economy back on track, and the long-term impacts the pandemic will have on business activity and tourism.

Craig Seymour and Eric Halvorsen, AICP are Principals with RKG Associates. RKG is an economic, planning, and real estate consultancy with offices in Washington, DC, Boston, Atlanta, Dallas, and Durham, NH. Since its founding in 1981, RKG has built a track record of sound planning advice rooted in data, creativity, and realistic, implementable strategies. RKG’s strength is in a diverse range of experiences that have helped hundreds of cities, towns and private firms make the most of spaces that matter to them. RKG specializes in economic analyses, market studies, financial forecasting, strategic planning, feasibility analyses, real property valuations, and housing strategies. www.rkgassociates.com

Rachel Roginsky, ISHC, is the Owner and Principal of Pinnacle Advisory Group. Ms. Roginsky has more than 35 years of experience in hospitality consulting. Since 1991, Pinnacle Advisory Group has provided advice and analysis on the full spectrum of hospitality properties throughout the US and Caribbean: hotels, resorts, conference centers, mixed use projects, convention centers and exhibition centers. Pinnacle’s services include development counseling, appraisals, acquisition due diligence, asset management, workouts, and litigation support. Our clients include leading lenders/investors, hotel companies, universities, and municipalities. We specialize in providing personalized advice on complex projects, carefully tailoring our services to each client’s individualized needs. www.pinnacle-advisory.com

The Boston & Cambridge Lodging Market’s Recovery Projected to Accelerate Into 2022
Global Economy Could Lose Over $4 Trillion Due to Covid-19 Impact on Tourism
U.S. Weekly Hotel Occupancy Reached Highest Level in a Year
Amidst Near-Term Headwinds, the Boston & Cambridge Lodging Market Awaits Recovery
Lodging Recovery in Boston & Cambridge Driven by Leisure Demand as Market Faces Increases to Supply
Bad vs Horrible – Depends on How Performance Is Measured
Through August, Greater Boston Lodging Market Ranks as the Hardest Hit by Pandemic
Why Tracking RevPAR Only Is a Recipe for Failure
Europe’s Summer Season Is at Stake, Can It Be Salvaged?
How Much Is a Hotel Worth?
Fragile U.S. Hotel Industry Records Monthly Performance Gains
Future for Independent Hoteliers Remains Uncertain, Says GlobalData
Hotels at Secondary and Tertiary Airports Will Suffer Longer
Hilton Reports First Quarter 2020 Results
COVID-19 Webinar Summary: 5 Key Points on U.K. & Ireland, 24 April
COVID-19 “The Hefty Guest”
The Impact of COVID-19 on Hotel Occupancy Levels in Athens and Thessaloniki
Impacts of COVID-19 on the Boston and Cambridge Hotel Industry
STR: U.S. Hotel Results for Week Ending 11 April
STR: Colombia’s Daily Hotel Occupancy Sinks to 3.9%