The travel and leisure industry has finally wrapped up 2020; a year like no other, with hotels enduring devastating declines to demand and revenue, job losses across the industry, government restrictions to day-to-day business, and extreme levels of uncertainty. As the United States faces a growing number of COVID-19 cases, surpassing 20 million by year-end 2020, lodging markets across the country continue to face unprecedented declines in demand. The Boston & Cambridge lodging market’s demand, or occupied roomnights, declined approximately 68% in 2020 when compared to 2019. Following its worst performance on record, the market is poised for growth in 2021 but faces an uphill battle to recovery in the short-term.

2020, The Market’s Worst Year on Record
Although the year began with increases to demand in January and February, things changed dramatically in March as COVID-19 case numbers increased and a State of Emergency was declared by Governor Baker resulting in a decline of lodging demand of over 60%. Between April and June, the Boston & Cambridge market experienced demand declines of over 90%.  These declines improved during the summer and fall months as the State began its phased reopening allowing regional leisure demand to increase. However, November and December, historically the slowest months for the market, experienced further declines in demand as case numbers began to surge ending the year with demand declines of approximately 75%. 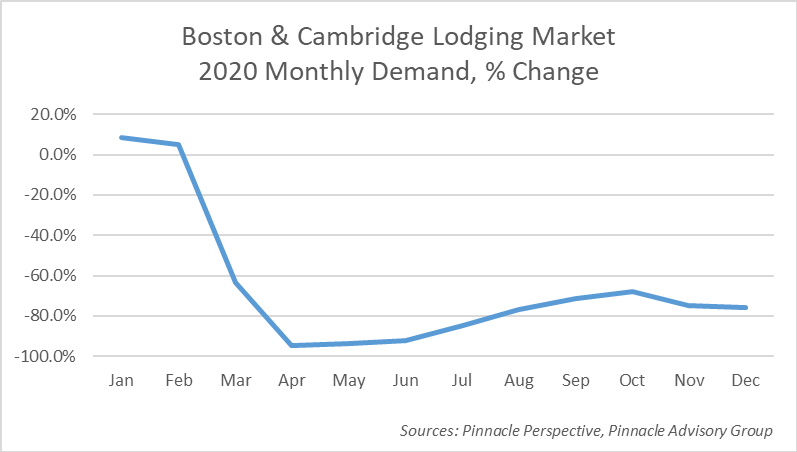 Using the total room inventory methodology which assumes no temporary closures, the Boston & Cambridge lodging market had an occupancy of 25.6%, a considerable decline from the 82.3% occupancy achieved in 2019. Relying primarily on lower rated leisure and contract demand through much of the year, the market’s ADR declined over 38%. With a revenue per available room (RevPAR) of $41, owners and operators in Boston and Cambridge have generated approximately 81% less room revenue than the prior year.

Gateway markets with a large amount of international travel, and urban markets which historically have a considerable amount of group and corporate demand, have been the most impacted by the ongoing pandemic.  Not only does the Boston market meet these criteria, but it was also one of the early epicenters of coronavirus cases and one which had severe government restrictions to businesses and large gatherings. According to STR, RevPAR in the Greater Boston Market declined 74.7% compared to the prior year, a decline second to only New York City. As outlined below, the Boston & Cambridge market’s RevPAR decline in 2020 was more severe than the Greater Boston market, the Top-25 Markets in the US, and the country as a whole. 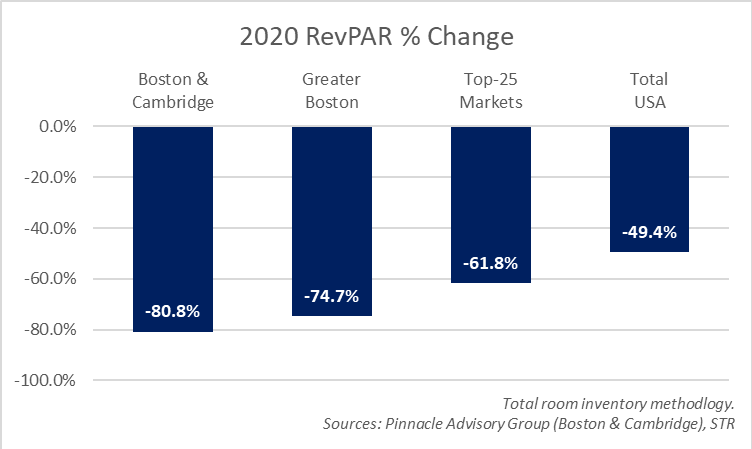 2021, What Lies Ahead
Through the first two weeks of the year, case counts show little sign of slowing both nationally and in Massachusetts. The year began with over 20% of the Boston & Cambridge rooms supply either closed or converted to dormitories for local colleges and universities. The hospitality and leisure industry represents one in ten jobs in Massachusetts and, as of November 2020, was down 35% compared to the year prior. Vacancies in the Boston and Cambridge office and lab market increased from 7.1% to 12.0% compared to the same time last year, the largest increase since the tech bubble. It is still unknown how the economic environment will change moving forward, however most owners and operators are aware of the long recovery ahead but are cautiously optimistic that it will begin to materialize in 2021.

Among the headwinds facing the Boston & Cambridge lodging market is an increase to rooms supply. As market demand begins to recover, especially through the second half of 2021, the market’s room supply will expand at its largest rate in over 20 years. With five additions to the market in 2021, the number of available rooms is expected to increase 6.4%, utilizing the total rooms inventory method.

Historically, lodging demand in the Boston & Cambridge market has been consistently split among corporate transient, group, and leisure, each representing about 30-35% of total demand. The pandemic shifted this mix greatly in 2020 as corporate and group demand were diminished for practically ten months of the year. Given the anticipated improvement to travel that will result from the implementation of a national and world-wide vaccine program which has recently begun, Pinnacle Advisory Group’s outlook for each demand segment is outlined below.

Corporate: Given the shift to work remotely in 2020 and very little corporate travel, both domestic and international, there has been a considerable decline in corporate lodging demand in the Boston market since March. According to a number of local operators, there was a slight increase in corporate demand in September and October, however this began to diminish mid-November. We have forecasted the corporate segment to begin its recovery in Q2 2021, with increased growth rates through the second half of the year. A widely distributed vaccine and a federal response to liability protections will help to encourage corporations to expand travel. Our 2021 projections reflect the corporate segment reaching approximately 50% of 2019 levels by yearend.

Group: One of the most impactful government restrictions to the lodging market has been the guidance on large gatherings. As a result of the orders, the last event held at one of Boston’s convention centers was in March 2020 and there has been very little group and convention demand in the market since. Outside of small SMERF (Social, Military, Education, Religious and Fraternal) groups which are typically low rated, hotels have not had the benefit of hosting groups. We have forecasted this trend to continue through the first half of 2021. The recovery of the group segment will depend largely on when restrictions to travel and large gatherings are eased or lifted, or ultimately when an effective vaccine is widely available. The booking window for the group segment is by far the longer, often times booking larger events over a year in advance, or citywide conventions five to seven years in advance. For this reason the group segment will take longer to recover fully. As of January, the city’s two convention centers and many full-service hotels have a significant amount of group demand on the books as early as Q2 2021. Our 2021 projections reflect the group segment being approximately 30% of 2019 levels by yearend and assumes that although attendance may be less than originally anticipated, events currently scheduled for the second half of 2021 will take place.

Leisure: On the rise through much of the summer and fall months, leisure demand was made up of mostly regional travelers. This segment is expected to ebb and flow with seasonal swings, holidays and vacation periods, or driven by local demand generators. Our 2021 projections reflect the leisure segment reaching approximately 80% of 2019 levels by year-end. With very little corporate and group demand in the market, leisure rates are expected to be extremely competitive.

Pinnacle Advisory Group utilizes a Total Rooms Inventory (TRI) methodology which assumes all hotel rooms are available and operational, including rooms which are temporarily closed or being used as student housing. Pinnacle Advisory Group has projected demand in the Boston & Cambridge lodging market to increase approximately 73% in 2021, equating to a 42% market occupancy. Although the market’s ADR recovery is expected to take longer than occupancy, Pinnacle has projected ADR to increase approximately 15% in 2021, the majority of which will be realized in Q3 and Q4.

While reported progress in vaccine development is welcome news, especially to industries which rely on travel and leisure, there remain numerous unknowns as to when and how the global economy will return. As outlined, we believe after a fairly weak first half to 2021, economic growth will materialize in the third quarter. Pinnacle has forecasted the Boston & Cambridge RevPAR to reach pre-pandemic levels in 2024. Certain submarkets may take longer, specifically those which rely more on group demand, international travelers, or those which will see above average increases to supply during the recovery period. Alternatively, well branded, value-oriented hotels which rely more on leisure travel will be well positioned the next few years, as will submarkets which rely on stable demand generators such as the market’s many healthcare institutions.

Although the overall market’s recovery may to take longer than other top-25 markets, the Greater Boston economy is built around education, healthcare, high-tech research, and financial services all of which have proven to contribute greatly to the lodging market. These stable economic drivers, matched with a highly skilled workforce, a robust tourism and convention destination, and the strength of Boston Logan International Airport, position the Boston lodging market well for a recovery once the country begins to emerge from the pandemic.

Sebastian J. Colella is a Vice President with Pinnacle Advisory Group based in the Boston office. With over 20 years in the hospitality industry, Mr. Colella leverages his operational knowledge and expertise from experiences in the field. Work with Pinnacle Advisory Group has included market and feasibility analysis, acquisition due diligence, departmental revenue and expense performance evaluations, facility recommendations, brand assessments and impact studies, as well as appraisals of both branded and independent hotels and resorts. Sebastian is an adjunct professor at the Boston University School of Hotel Administration and received his Bachelor of Science degree at the School of Hotel Administration at Cornell University.