Nobody Asked Me, But… No. 232: Hotel History: Union Station Hotel

Home/Nobody Asked Me, But… No. 232: Hotel History: Union Station Hotel

Nobody Asked Me, But… No. 232: Hotel History: Union Station Hotel 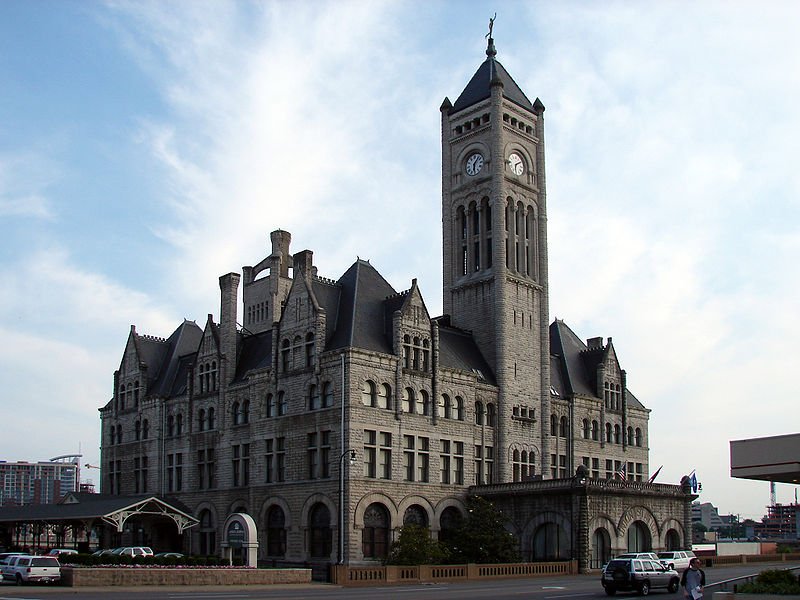 Long before it was a historic hotel, the Nashville, Tennessee Union Station was a key center in America’s economy and transportation. Opening on Oct. 9, 1900, for the Louisville & Nashville Railroad, the building’s imposing Gothic design featuring a soaring barrel-vaulted ceiling and Tiffany-styled stained glass, was a testament to U.S. ingenuity and energy. During railroading’s glory years, Mafia kingpin Al Capone was escorted through here on his way to the Georgia penitentiary. Other fascinating facts surrounding this historic Nashville station include:

Architect Richard Montfort (1854-1931) designed the Nashville Union Station for the Louisville & Nashville Railroad. The monumental station is truly special for the following characteristics:

The station reached peak usage during World War II when it was the shipping-out point for tens of thousands of U.S. troops. After the war, it started a long decline as passenger rail service in

the U.S. generally was reduced. By the 1960s, it was served by only a few trains daily. Much of its open spaces were roped off and its architectural features became largely the habitat of pigeons. The formation of Amtrak in 1971 reduced service to the northbound and southbound Floridian train each day. When this service was discontinued in October 1979, the station was abandoned entirely. The station fell into the custody of the United States Government’s General Services Administration. In the early 1980s, a group of investors came forward with a plan to finance the renovation of the station into a luxury hotel which was approved. After extensive renovation, the new investor group who bought the hotel out of bankruptcy was able to operate it profitably.

By the mid-1990s they had restored the statue of Mercury to his place atop the tower, albeit in a two-dimensional form painted in trompe l’oeil style to replicate the original. This was destroyed in the 1998 downtown Nashville tornado but was soon replaced.

Built in 1900 and housed in the Romanesque Gothic former Union Station railway terminal, this hotel is a grandly restored National Historic Landmark. Following a $10-million renovation, completed in 2007, all guest rooms and public spaces have been updated. The lobby is the former main hall of the railway station and has a vaulted ceiling of Tiffany stained glass….

The Union Station Hotel Nashville, Autograph Collection is a member of the Historic Hotels of America and the National Trust for Historic Preservation since 2015. It was designated a National Historic Landmark in 1977.

4. If You Need an Expert Witness: