Negotiation-Based Pricing: The Future of Direct Bookings for Hotels?

Home/Negotiation-Based Pricing: The Future of Direct Bookings for Hotels?

Negotiation-Based Pricing: The Future of Direct Bookings for Hotels? 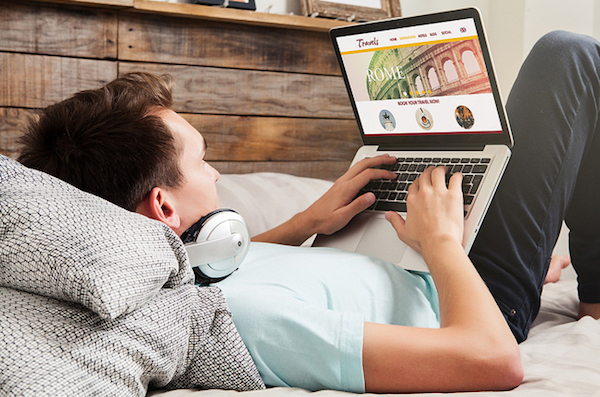 Looking back on the history of hotel pricing strategies, nothing really stands out until the early 80s. Before the deregulation years, most hotels stuck to a traditional model of rates, based on economic fundamentals, such as cost price and profit margin.

The rise of neo-liberalism allowed for ambitious and previously unseen business tactics. One of them, first developed in the context of airlines, was the variable pricing strategy known as Yield Management. Understandably, Yield Management was a true game-changer which quickly generated large profits for lots of companies in multiple industries, and was propelled to a whole other level thanks to the digital revolution.

Just as deregulation and the digital revolution gave birth to Yield Management, the current hospitality climate is ripe for disruption and innovation The rise of OTAs, Airbnb and changing traveling habits (especially for Millennial travelers) have without a doubt made the life of many hoteliers more difficult over the last few years and, thus, call for new approaches in revenue management.

Instead of solely relying on economic and internal indicators to set a hotel room's price, hoteliers – thanks to ever growing technologies – now have many opportunities to adopt a more customer-centric approach. Theoretically-speaking, it is nowadays completely imaginable to directly collect inputs from various target audiences. Indeed, what’s the point of going through many layers of information to try to determine the ideal match between offer and demand, when you could just reverse the process and find out where the demand stands right away?

This approach appears trivial as it would be impossible to accept every single price potential guests are willing to pay; between ridiculously low offers, jealous customers and/or bad decisions, safeguards are needed to keep a strategy within reason. That’s where the negotiation part begins.

Tapping into negotiation for your pricing strategy Negotiation is a loaded term as it might bring up negative preconceptions, such as being laborious, time-consuming, etc. But once we get past these assumptions (some of which can be greatly mitigated as we'll see later), it becomes clear that, more often than not, this process can bring about a win-win outcome and create great value for both a hotelier and a guest. How so?

Delivering a personalized booking experience One major transformation we mentioned earlier is the change in traveling habits, especially for the Millennial generation. Studies show that people born between the 1980s and 1990s, and this can stretch further, are much less responsive to the harmonized yet impersonal nature of big hotel chains. They seek personal experiences above everything else; their trip has to be unique and special. And this starts as early as the booking process.

When going through a negotiation process, customers instantly feel like they are no ordinary consumer. By nurturing the positive perception they are a truly valuable guest – so much so that said hotel is willing to adapt its rates for them – hoteliers tapping into negotiation basically send the strong message that they not only acknowledge a guest's request, but that they act upon it — from the get-go.

Overcoming cognitive bias In psychology, a cognitive bias is recognized as a pattern of deviation from judgment due to individuals creating their own subjective reality. Simply put, it’s when someone acts in a narrow-minded, non-rational way because of an experience that distorted their decision-making process.

This principle applies particularly well in negotiation-base pricing. Indeed, once guests are engaged in the negotiation process, they feel a certain sense of commitment to a hotel. As they already put the time and effort to go through a discussion with an establishment, customers are less likely to be willing to abandon all the laborious work they did to come to an agreement about the price, which in turn translates into a better transformation rate on the hotel's end.

This is not unlike the principle of sunk costs fallacy in economics, which states that the more financially (in our case emotionally) invested a person is in a project, the less likely they are to make good, rational decisions.

Maximizing a hotel's occupancy rate One of the most important metrics in the hotel industry is the Occupancy Rate (OR). This is mainly because empty rooms are at a real cost for the hotelier. And since the marginal cost (mainly cleaning, linen, disposables) of a hotel room is usually rather low, hoteliers are generally looking to maximize their OR at all cost. But that’s where most hotels hit a major wall, known as the risk of image.

Indeed, even though they might want to lower their price to sell more rooms, hoteliers are not willing to risk giving their hotel a bad reputation by publicly displaying very low prices. This situation can be depicted as follows: 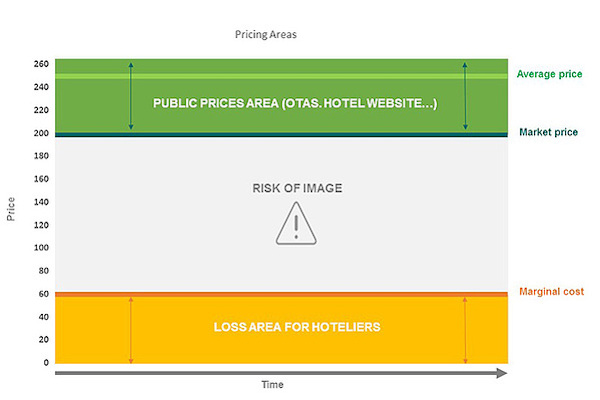 Negotiation is a good way to go around this major problem. Indeed when going through this process, hotels are not publicly jeopardizing their reputation as the agreed upon deal remains private. This way, hotel managers can easily go under the market price line and agree on discounted prices as long as they stay above their marginal price (orange).

What better way to maximize a hotel’s OR and, by doing so, drastically increase revenue?

Negotiation-based pricing: the future of hotels' direct bookings? The most popular modern example of auction-based pricing is eBay which revolutionized the way people shop over the past two decades. More recently bidding strategies have become the way of business in media-buying, with platforms such as Facebook and Google leading the way. Art or wine dealers have also greatly started to tap into the opportunity created by new technologies to recreate auction experiences online, across various platforms. The hotel sector however has not seen any major breakthrough… yet.

These hold true when engaging in negotiation-based pricing manually. But who said it can't be automated?

An ambitious Swiss startup aims at overcoming those very challenges for hoteliers and facilitating negotiation-based rates.

PrivateDeal – created in 2017 by former hospitality professionals Lucien Mauguin and Isabelle Jan – is part of Ecole hôtelière de Lausanne's Incubator and developed a smart negotiation solution for hotels. The booking engine, which is white-labeled and integrated into any hotel website, lets guests set their own price for a room and if necessary, automatically and instantly negotiates the best rate for both parties.

Selected in early 2019 as part of the Top 50 startups to invest in by Swiss media company Bilan and banking institution UBS, PrivateDeal is currently in the process of raising its next level round of investment. According to Mauguin:

According to Meng-Mei (Maggie) Chen, assistant professor at Ecole hôtelière de Lausanne, negotiation-based pricing is another sign of hoteliers’ efforts to obtain more direct bookings. Although a paying strategy for hoteliers ideally lies in the search for opportunities to earn premium revenues, combining negotiation-based pricing and attribute-based selling could counter the trend of discounted sales from indirect channels.

A hotel positioning itself as a local concierge by providing customers customized packages option, while offering the opportunity to negotiate these tailored packages creates a win-win situation.

Imagine a multi-generational traveler group demanding a mini-bus and a driver for a few days, special amenities for the young mother and baby, a wheelchair for the grandfather and presented with the opportunity to negotiate the rate of the whole experience: that is a true customer-centric approach.

Covid-19: Winning Back Trust and Creating Safe-Havens Through Effective Communication
The Path Towards Customer-Centricity in Hospitality
7 Signs You Need Help With Your Business Guest Experience
Social Distancing: Short and Long-Term Implications for the Foodservice Industry
Hotel Concept Handbook: Developing a Compelling Hotel Concept
An Initial Checklist for Temporary Hotel Closures
Could Big Data Help Us Manage the Lockdown Better?
The Relevance of Brand Relevance
Covid-19: What Should Hoteliers Keep in Mind In the Midst of the Current Crisis
Chinese Tourism at a Difficult Time
The Bear, the Bull and the Wolf: a 2020 Economy Fairytale
5 Steps to 5-Star Service Excellence, Inspired by the Ritz-Carlton
Is 2020 the Year of Sustainable Business in Hospitality?
Why Businesses Should Invest in Soft Skills Training
Nine Facts About Driving Innovation Through Diversity
Is Service Excellence the New Marketing?
Coronavirus: What Impact on the Swiss Hotel Industry
Sustainable Tourism: Why Should Hotels Lead in This Effort?
Tourism Satisfaction: Importance, Measurability & Impacts
Sustainable Hotels: Learnings from Designing a Carbon-Positive Hotel