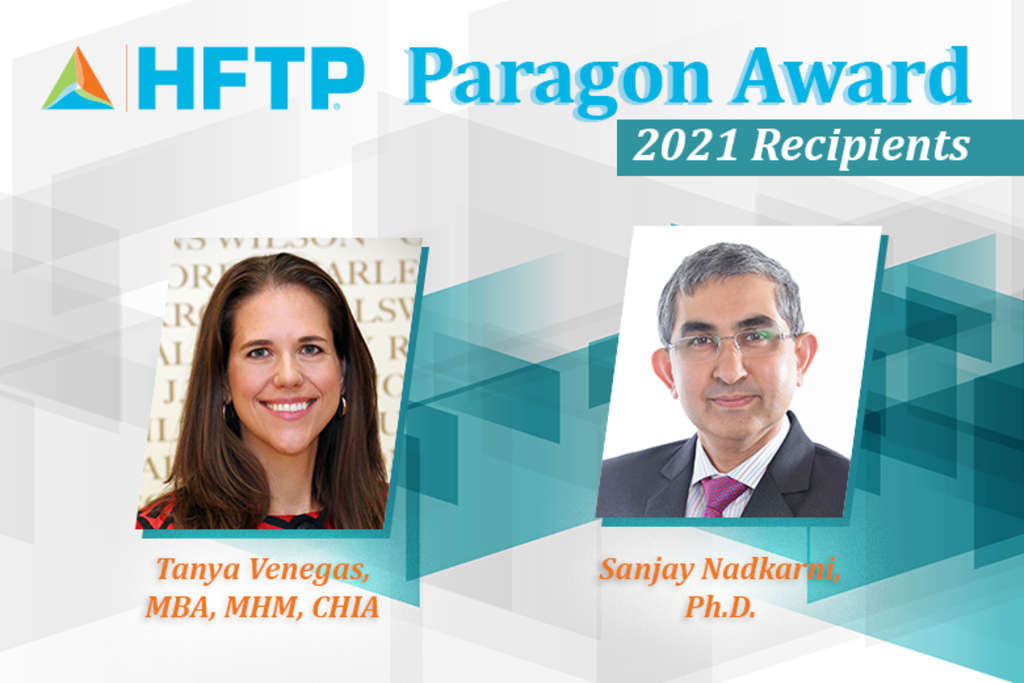 Both recipients have been essential to the association’s research and academic endeavors.

Tanya Venegas, MBA, MHM, CHIA and Sanjay Nadkarni, Ph.D. have been selected as the 2021 Hospitality Financial and Technology Professionals (HFTP®) Paragon Award recipients for their excellent direction of the HFTP Research Centers and their impactful tutelage over hospitality students and HFTP student members. Venegas is Global Head of Customer Success for HotStats, Inc., but had previously served as director/executive director of the HFTP Americas Research Center at the University of Houston from 2002 – 2018. Nadkarni is Director of Innovation and Research at The Emirates Academy of Hospitality Management and oversees the HFTP Middle East Research Center, established in 2016. Venegas and Nadkarni will be honored on October 20, 2021 during HFTP’s Annual Business Meeting, held virtually.

“It is truly an honor to be nominated by my HFTP family and colleagues in the industry and chosen as the recipient of the 2021 HFTP Paragon Award,” said Venegas.

Venegas started as a teaching assistant working for the University of Houston in 2002. She was assigned to the HFTP Research Center which was founded as part of HFTP’s initiative to provide the hospitality industry with the highest quality resources and research. Upon graduating with a Master’s degree, she was the obvious choice for the new executive director position and worked there for more than 15 years. In her time at the HFTP Americas Research Center, Tanya helped individual HFTP members by answering hundreds of questions. In addition, she has overseen multiple research projects commissioned by HFTP leadership. From the beginning she led the biennial HFTP Compensation and Benefits Survey, tracking salary and benefit trends with each report. Tanya helped build and maintain the Global Hospitality Accounting Common Practices (GHACP), a searchable database of detailed operating financial reporting practices. And finally, she was a primary contributor to HFTP publications, writing in-depth articles, blog posts and research reports on hot topics and trends.

Tanya is also a volunteer and has been a mentor, and a role model for the University of Houston HFTP Student Cougar Chapter. Her mentoring has helped the “Cougs” win the HFTP Student Chapter of the Year Award many times. In addition, she has been an integral part of the Greater Houston Chapter having served both on the board and as a president of the chapter.

“I am privileged to have been chosen for the Paragon Award. If there is one key takeaway from these difficult times, it is the significance of being digitally versatile,” says Nadkarni. “I am delighted to have had the opportunity to contribute in bringing the benefits of digital agility and transformation to hospitality. The award is a testimony that academics, too, can add value to this incredible industry, and I am grateful to HFTP for being part of this story.”

Nadkarni has been essential to HFTP’s growing presence in the Middle East, including an active Research Center based at the Emirates Academy of Hospitality Management. He also has worked tirelessly to help develop programming for HITEC Dubai and HFTP’s E20X technology start-up competition.

Nadkarni’s domain interests are in the convergence space of analytics, digital and sustainability in the services sector. His portfolio comprises of academic and applied research, advisory and consultancy assignments for corporate, government and multilateral agencies, in addition to his pedagogic practice which includes visiting professorships at premier academic institutions in Asia and Europe. He is also a verified Dubai Futures Research Contributor. Nadkarni’s focus is on developing and co-creating applied research and capacity building practices that have a tangible impact on the industry. He is passionate about leveraging Industry 4.0 and democratizing data science to benefit small and micro-businesses and enjoys mentoring in social entrepreneurship.

Established in 1999, the prestigious HFTP Paragon Award recognizes individuals each year who have made a significant and lasting contribution to both HFTP and the hospitality industry. Paragon Award nominees can be HFTP members; representatives of industry-related associations, societies or trade publications; leaders from hospitality businesses, educational institutions and other related disciplines. A panel of industry experts selects the award recipients who are traditionally recognized at HFTP’s Annual Convention each October.

Hospitality Financial and Technology Professionals (HFTP®) established in 1952, is an international, nonprofit association, headquartered in Austin, Texas, USA, with offices in the United Kingdom, Netherlands and Dubai. HFTP is recognized as the spokes group for the finance and technology segments of the hospitality industry with members and stakeholders spanning across the globe. HFTP uniquely understands the industry's pressing issues and assists its stakeholders in finding solutions to their challenges more efficiently than any organization. It does this via its expert networks, research, certification programs, information resources and conferences/events such as HITEC. HFTP also owns the world's only hospitality-specific search engine, PineappleSearch.com. For more information about HFTP, email [email protected] or visit the HFTP website.