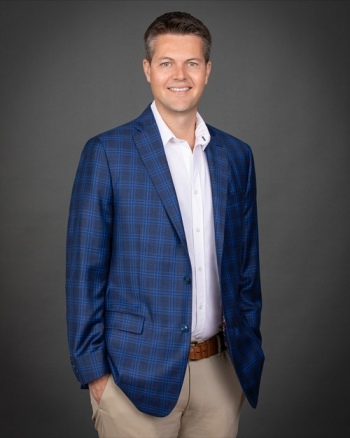 IRVINE, Calif., June 14, 2022 — Pacific Hospitality Group Ventures, Inc. (“Pacific Hospitality Group”), a leading Orange County based hotel management and investment company, is pleased to announce that Garrett S. Busch has been named as President. In his new role, Busch will oversee the portfolio of 12 independent hotels and resorts. He will succeed Paul J. McCormick, the outgoing President and COO. Garrett Busch has served as Pacific Hospitality Group’s Vice President of Capital Markets and Development since 2019 and will continue to spearhead the company’s expansion efforts while assuming day-to-day oversight of the entire company.

“Garrett’s proven track record, business development acumen, and unrivaled dedication makes him the right leader for Pacific Hospitality Group,” said company founder and Chief Executive Officer Timothy R. Busch. “Garrett’s love for the business combined with his ability to run a multifaceted operation makes him the perfect leader for us. He is poised to take the helm and lead PHG to our next phase of growth.”

Busch replaces Paul J. McCormick who steps down as President after successfully leading the company for the past 4 years. McCormick, a seasoned hospitality veteran who has led operations for KSL Resorts, Miraval and Sage Hospitality, to name a few, led PHG to record revues in 2019 and steadfastly guided the company through the Covid storm. “We will forever be indebted to Paul for his dedication and leadership,” added Busch.

“I am honored and excited by this opportunity,” said Garrett Busch, now President of PHG. “My family’s support and team’s confidence in me has allowed me to move from growing the company to now leading the company. I am already getting to know our 1,550 team members across the country and am humbled by each one of them. It is a privilege to be their leader and look forward to all of the expansion and best in class operations our portfolio will enjoy together.”

Under Busch’s tenure as Vice President of Capital Markets, Pacific Hospitality Group acquired the Hotel Granduca in Austin, Texas in December 2020 and completed the ground-up construction of the Hyatt Place Hotel in downtown Phoenix, Arizona in May 2021. Garrett recently led Pacific Hospitality Group and the Busch Family’s efforts to recapitalize, refinance, and consolidate control of The Meritage Resort and Spa and its soon to be reimagined sister property, The Grand Reserve at the Meritage, both located in the picturesque Napa Valley.

Before taking the reigns of the development team, Busch spent 8 years running the family winery Trinitas Cellars, in Napa, California. During his time in Napa, Garrett significantly expanded the winery’s revenues and reach where he championed fruitful wine partnerships with his alma matter, the University of Notre Dame. Busch received his undergraduate degree in business and his MBA from the University of Notre Dame where he majored in Entrepreneurship and Finance, respectively.

Irvine based PHG owns and operates hotels across the United States. PHG's investment philosophy is to hold assets long-term in order to drive long-term value for investors while make lasting community contributions. PHG's portfolio includes both branded properties (Marriott, Hilton, and Hyatt) and its independent Meritage Collection properties located in iconic locations such as the Ko'a Kea Hotel & Resort in Kauai, Paséa Hotel & Spa in Huntington Beach, Hotel Granduca in Austin, and the aforementioned Meritage Resort and Spa in Napa.