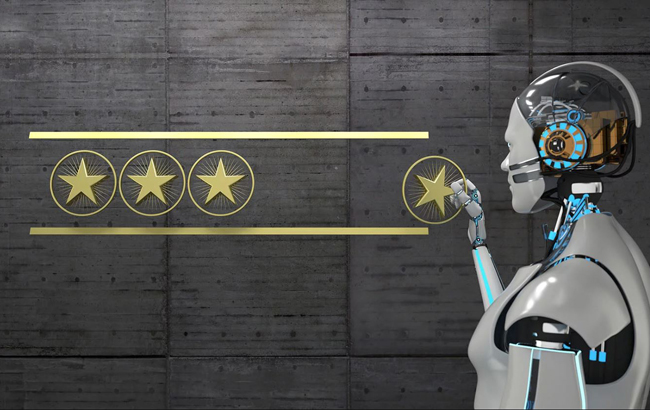 Artificial intelligence is undoubtedly going to have an impact on the hotel industry as the bots – robots and chatbots – play a greater role. Julia Aymonier, CIO of EHL, says yes, some jobs will change, particularly those related to repetitive tasks. “The biggest challenge,” she told Hospitality Insights in an interview, “will be to train people for jobs that are created by artificial intelligence.”

“There will be jobs, and if we don’t train people, we won’t have the staff we need to do these new jobs.”

We’re unlikely to see robot concierges in four- and five-star hotels, as you can’t have the “human touch” and the sort of relationship or contact expected in these hotels with a robot.

“But room service, why not? If you’ve got a robot which comes to your door and is capable of behaving like a human, taking a tray out and putting it on a table, then that job will probably go.” “Robots which can go into a room and take all the laundry and put it in a (washing) machine, why not?”

Aymonier, who has been speaking at a range of forums recently on the topic of AI, says that although there are plenty of opportunities to do other types of value-added work that would be more interesting, “we need to gear up the way we train these people. We already have huge holes on the market for a lot of positions in IT today.”

“It takes a lot of work to train a machine, even an artificial intelligence machine, to understand what you want it to do.”

“We need a quantum leap in terms of technology. We’ve got machines which can do artificial intelligence today but to give us the power to go further we need quantum computing.”

It takes a lot of hard work to teach an AI system to do what you want it to do. I relate that to having a baby. You have this baby that knows nothing and then you have to teach it, correct it, show it the right path …. In terms of AI, the system will then be able to answer – most of the time – what you want it to answer. But we’re not there yet and it’s not magic.”

One is a virtual personal assistant named ‘Amelia’, which initially will help guests and students connect to the Wi-Fi, and at a later stage will answer questions from potential students and parents about the school’s courses. (“She’s hardworking and not supposed to get sick.”)

The other project will an ‘Alexa’ of sorts – the virtual assistant developed by Amazon – at the reception to answer questions and provide general information.

The school has already been trying to train a robot concierge, albeit with varied results. (The Hilton in McLean, Virginia, near Washington DC, is already using a small, IBM-developed robot called Connie.)

So the next idea will be to take whatever platform – whether Alexa or the virtual personal assistant – and connect the two together and have a machine that has that intelligence behind it to learn from, but also have mobility. In the end, the idea would be to have several robots wandering around the campus and have artificial intelligence built in, so the robots can answer questions and you don’t have to go to one specific place.”

We’re also looking at using AI to give us some gamification types of courses and mixing these with augmented and virtual reality systems.

The school is about to launch a virtual reality class for first-year students, “which is based in a five-star hotel and deals with housekeeping issues which would be quite interesting.”

“We decided to do that as a proof of concept to see what it can actually bring” in terms of value. That project is due to be launched in February 2019.

“Virtual reality is quite interesting because it may be the way we’ll sell holidays in the future.”

Aymonier expects AI to be used to provide predictive analysis of students’ results so “we can give extra training to (a particular student who is likely to fail) in certain subjects.” The school may start to explore this in 2019, using software to examine patterns related to learning habits and outcomes to see if students “might have a bit of a problem so we can give them some extra coaching or extra time in class.”

Based on their ability, classes could also be tailor-made for the students.

All that, however, involves some sort of cost. Aymonier though believes the cost of the extra time and coaching can be offset. “Do we really need to bring it down to money? If we can help somebody we should do it. If machines can give that information and prevent students spending all this time in school and coming out with nothing, I think that’s worth more than the money.”

Julia Aymonier was named EHL’s Chief Information Officer in February 2016, making her the first woman on the Executive Committee in the school’s history. She had previously specialized in IT for the banking, finance and trading industries, working for companies such as JP Morgan (Suisse), La Compagnie Benjamin de Rothschild, Banque Bordier et Cie, and Union Bancaire Privée. She graduated from Glasgow University and the Polytechnic of Wales with a BSc (Hons) in Computer Science.

Opportunities for Tourism Due to Post-Pandemic Travel Triggers
An Interview Between HFTP CEO Frank Wolfe and ChatGPT
ChatGPT and Artificial Intelligence (AI)
Labor Shortages and The Impact on Hotel Operating Costs
ChatGPT Is Scary Good, But Can It ‘Rewrite’ the Future as We Know It?
Hospitality Trends 2023 – the Future Ahead
Sustainable Actions in Hospitality: A Driver for Competitive Advantage
How Important Is AI to the Future of the Procurement in the Hospitality Industry?
Optimizing Sustainability in Hospitality via Supply and Value Chains
10 In-Demand Hospitality Resume Skills
Using Artificial Intelligence to Positively Impact Your Hotel
Regenerative Tourism – A Holiday Mind Shift Beyond Sustainability
Trends in Hospitality – The Impact of an Energy Shift
HVS Monday Musings: Hotel Industry Tapping the Metaverse
Swiss Tourism Outlook 2023: Datafication for Resilient Tourism
81 Percent of Hoteliers See a Lift in Revenue Once a First-Party Data Strategy Is Implemented
Managing the Talent Gap: Sparking Passion for Hospitality in Gen Z
Transformational Resilience in the Hospitality Industry
Chef Franck Giovannini on the Constant Changes in the Restaurant Industry
U.S. Hospitality Gets More Hospitable With the Launch of allora.ai – the World’s First AI Booking Platform