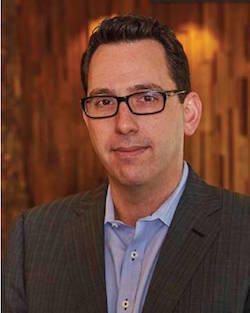 SAN FRANCISCO (October 31, 2018) – Viceroy Hotel Group is pleased to appoint Brad Busby as the General Manager of Hotel Emblem San Francisco. A seasoned hospitality veteran with more than a decade of experience in luxury hotel and resorts throughout the country, Busby is committed to a successful opening and the growth of Hotel Emblem, formerly Hotel Rex, which is undergoing an extensive renovation and bold rebrand to debut in early 2019.

“We are delighted and lucky to have Brad at the helm of Hotel Emblem; he’s been a trusted member of our Viceroy family for the past two years and he has the perfect expertise and persona for this unique, special property,” said Mike Walsh, Chief Operating Officer at Viceroy. “Brad represents Viceroy’s warm sense of hospitality and brings with him an impressive background with globally acclaimed properties that will allow him to successfully launch Hotel Emblem early next year. We look forward to seeing Hotel Emblem shine under Brad’s purview, and we are confident he will create a best-in-class guest experience at this dynamic new San Francisco destination.”

Busby’s role at Hotel Emblem continues his tenure with Viceroy Hotel Group, where he previously served as the Director of Rooms at Viceroy Snowmass in Aspen, Colo. Prior to joining Viceroy, Busby held key roles at distinguished companies including Hyatt Hotels, Baha Mar Hotels, and Las Vegas Sands Corporation. Early in his career, Busby earned recognition upon receiving Hyatt Hotels’ Management Leadership Award, followed by a seven-year stint with Venetian/Palazzo in Las Vegas, Nev. During his time at Venetian/Palazzo, Busby advanced through several positions and helped garner its recognition as an acclaimed Five Diamond Resort. Busby went on to further his career by joining the opening team of a 2,500-room Integrated Resort in Nassau, Bahamas which encompassed four brands: Hyatt, SLS Lux, Rosewood and Baha Mar Casino & Hotel. Prior to joining Viceroy Hotel Group, Busby pursued the Director of Operations role at San Diego’s famed Hard Rock Hotel.

“I look forward to carrying forth Viceroy’s warm, personal approach to hospitality into Hotel Emblem, while creating unique experiences and programming that are completely custom to this distinctive property,” said Busby. “It is an honor to lead the charge on the reopening and rebranding of Hotel Emblem, which is inspired by the important cultural movement of the Beat Generation. I look forward to sharing with guests all that this extraordinarily diverse City has to offer, from the historic Beat Generation culture and beyond.”