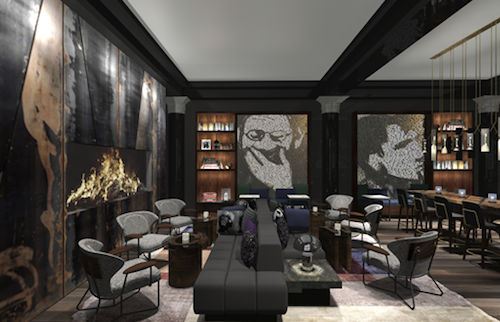 SAN FRANCISCO (September 19, 2018) – Viceroy Hotel Group is enticing travelers to leave the status quo with the announcement of its new San Francisco boutique hotel, Hotel Emblem. The 96-room property, formerly Hotel Rex, will re-open in early 2019 after an extensive renovation and rebrand inspired by the Beat Generation.

Every corner of Hotel Emblem is being reimagined to spark conversation and empower guests to think and act boldly.

Hotel Emblem is ideally located in the heart of the city, at the confluence of two storied neighborhoods, Union Square and Nob Hill. The hotel is owned by DiamondRock Hospitality Company and is newly a member of The Viceroy Urban Retreats, poised to redefine the modern hotel experience.

“San Francisco is one of the most diverse and extraordinary cities in the country, and it is our goal with Hotel Emblem to reflect and tell the story of its distinct character and expressive history,” said Brad Busby, General Manager. “Every detail, from the symbolic name choice to the dramatic, purposeful design, is an expression of the pioneering nature of the city and its people. We are honored to debut Hotel Emblem next year as one of the most authentic and dynamic new destinations for drinking, dining, culture and accommodations in San Francisco.”

Viceroy Hotel Group inspires travelers with one-of-a-kind authentic lifestyle experiences that bring together provocative design and intuitive service in sought-after locations. A leader in modern luxury, Viceroy’s vibe-led hospitality is guided by the brand promise “Remember to Live,” an affirmation to create lifelong memories for each and every guest. Viceroy destinations are segmented into three distinct portfolio tiers to help travelers find exactly the kind of experience they’re looking for. The Viceroy Icon Collection properties include epic hotels and resorts in Los Cabos, Chicago, Dubai, Beverly Hills, Riviera Maya, Snowmass, and St. Lucia, with forthcoming openings in Algarve, Buenos Aires, Panama, and Vietnam. The Viceroy Lifestyle Series hotels and resorts are found in attitude-led destinations including New York and Santa Monica, with a forthcoming opening in Serbia. The Viceroy Urban Retreats in San Francisco have an independent spirit and bold, eccentric personalities. Viceroy Hotel Group is a member of the Global Hotel Alliance (GHA) DISCOVERY, a unique loyalty program offering exclusive benefits and experiences to its members at over 500 hotels around the world. For more information, visit www.viceroyhotelsandresorts.com. Follow Viceroy Hotel Group at facebook.com/viceroyhotelgroup and on Instagram and Twitter @viceroyhotels.