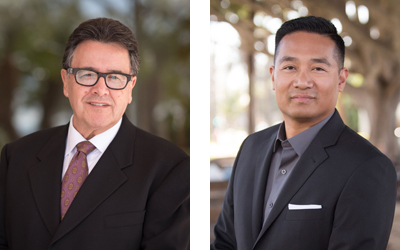 SANTA BARBARA, Calif. (March 7, 2017) – Santa Barbara’s most anticipated new luxury property, the Hotel Californian, is excited to announce the executive team to lead this 121-room coastal retreat. Having led some of the finest hotel properties in the world including the Hotel Bel Air in Los Angeles, Carlos Lopes brings his unparalled pedigree and experience to the Hotel Californian team as managing director. Industry veterans Warren Nocon and Ellen Adelman will join the Hotel Californian team to head up hotel operations and sales and strategic marketing. Together, Lopes, Nocon and Adelman bring decades of luxury hospitality experience to this elegant new addition to the Santa Barbara waterfront.

As the managing director of the Hotel Californian, Carlos Lopes brings his luxury management expertise to all facets of hotel operations. In this role, Lopes will ensure that all Hotel Californian services and facilities reflect the finest quality standards. Lopes resume’ includes: managing director and vice president of the Hotel Bel-Air; executive vice president of Rock Resorts; senior vice president of Rosewood Hotels & Resorts and senior vice president of Four Seasons Hotels and Resorts. Lopes innovative positioning and hotel management expertise and has earned prestigious awards and achievements, including a Forbes Five-Star rating for the Hotel Bel-Air and for the Cap Juluca resort on the island of Anguilla, a ranking as the No. 1 Beach Resort in the world.

General Manager Warren Nocon brings more than 20 years of hospitality experience to the Hotel Californian. Nocon will manage all aspects of the day-to-day operations at the Hotel Californian, including sales and marketing, revenue management, and food and beverage. Nocon most recently served as the general manager at the Colony Palms Hotel in Palm Springs and The Ambrose Hotel in Santa Monica. At the Colony Palms, Nocon created one of the liveliest and most soulful destinations in Palm Springs, attracting celebrity guests to this desert hideaway. Prior to Colony Palms, Nocon was a hotel operations leader for the SLS Hotel in Los Angeles.

One of the most anticipated hotel openings in 2017 will be Santa Barbara’s Hotel Californian. Featuring Spanish Colonial Revival architecture and a modern Moorish vibe, this unique coastal retreat will cater to the Hollywood elite, locals and international visitors alike. On the site of the original Hotel Californian, this State Street seaside destination has been meticulously crafted by developer Michael Rosenfeld featuring paseos, gardens, fountains and open plazas.  A unique rooftop pool and event deck will provide unobstructed views of both the coastline and the Santa Ynez Mountains.  Featuring a luxury Turkish-inspired spa, fashion boutique and casual dining options, the 121-room Hotel Californian is located adjacent to Santa Barbara’s vibrant Funk Zone and one block from Union Station.  Its ballroom, event lawns and meeting spaces will provide memorable venues for weddings and group events.  Interiors from celebrity designer Martyn Lawrence Bullard, will enhance the quintessential California Spanish Colonial architecture with Bullard’s unique Moorish inspired details.