Robots: Coming Soon to a Hotel Near You?

Home/Robots: Coming Soon to a Hotel Near You?

Robots: Coming Soon to a Hotel Near You? 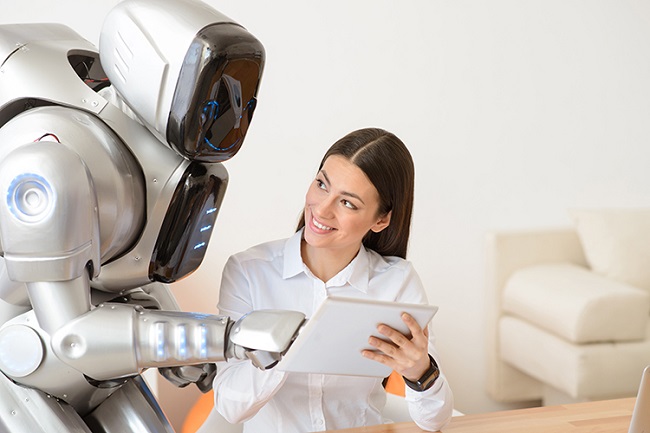 In March, Spencer began escorting lost travelers to their gates at Amsterdam’s Schiphol Airport. That same month, robot hosts welcomed visitors to big trade shows like ITB in Berlin while the Hilton McLean Virginia in Washington, D.C, welcomed Connie the robotic concierge. Then there’s the robotic receptionist at Belgium’s Ghent Marriott. Not only can Mario speak 19 languages, he does so while dancing to Michael Jackson.

While these may have a certain novelty factor for now, it’s behind the scenes where artificial intelligence will really shake up the hospitality industry. According to the European Commission, the market for service robots will reach €100 billion a year by 2020.

“From our point of view there are two elements to robotics,” says Richard Pemberton, hospitality consultant with Avenue9, part of JLL Group. “There’s the side you can see and touch, and then there’s the processing that happens behind the scenes.”

“Similarly, the goals of the technology are twofold,” he says. “On the one hand to improve operations, and on the other to control costs, through increased efficiency, for example, or higher sales.”

US-based fast-food restaurant franchise Zaxby’s have been employing robotics to do both. Known as Hyperactive Bob, the unseen robot reduces waste and waiting times by scanning the parking lot for incoming cars while taking into account various data such as time of day and amount of hot food ready at a given moment.

“The algorithmic system senses demand based on customer arrivals and makes predictions that feed into planning,” explains Pemberton. “This allows staff to adjust the timing of the cooking process, and respond to specific directions that speed up service, and thus turnover.”

Currently, front-of-house robots are able to carry out rudimentary functions, such as checking guests in or recommending local restaurants. “You wouldn’t replace your concierge with a Connie—not just yet anyway,” says Pemberton. “Hotels should be trying to engage people with a product that works alongside the human team, as opposed to replacing it.”

Nua Robotics, for example, have produced a suitcase that follows you around. “It works using Bluetooth and cameras to detect where you are,” explains Pemberton. “Hotels could adopt the technology to track guests’ luggage.”

Similarly, Savioke’s Relay can learn the layout of a hotel and deliver items to guests on demand. Though not quite ready to offer full room service (the Relay can’t carry hot food), the autonomous android is already being employed by hotels, like Starwood’s Aloft group, who have named their new staff-member Botlr.

Such robots, whether they’re making deliveries or welcoming guests, have been well received by the public. “The feedback I saw at CeBIT this year was really positive,” said Pemberton. But it’s the crossover of front-facing robots and back-end artificial intelligence that has the potential to transcend the novelty factor. “AI is where we’re going. Once we’ve perfected that side of things, it’ll be a huge boon to this industry.”

Hilton’s Connie is among the most advanced products from this perspective. Named after the hotel chain’s founder Conrad, Connie is the hospitality industry’s first concierge powered by IBM Watson, which is described on its website as “a technology platform that uses natural language processing and machine learning to reveal insights from large amounts of unstructured data.”

“With all IBM’s customer relationship management solutions, it’s not going to be too long before they add the ability for robots to recognize people as they come into the hotel,” says Pemberton. “It could connect to the guest’s smartphone via Bluetooth or use facial recognition.”

An intelligent interface like this can also collect and structure data about guest behavior and preferences, and begin to build up a profile that helps hotels deliver a truly personalized and seamless customer experience.

“Front-facing robots play an important role in data gathering, and can then make connections. For instance, they can store a query and intelligently offer relevant information to a guest in future,” says Pemberton. Crucially, such data can be amassed in a centralized location and delivered on demand locally, so the preferences of a guest staying in a hotel in Miami will be captured and reapplied when she checks into a hotel belonging to the same chain in say, London.

Ritz-Carlton’s Mystique system employs a similar approach, though the data is predominantly gathered by humans at the moment. “Whenever we discover or are alerted to a guest’s preferences, we put them into Mystique, and Mystique talks to all the properties within Ritz-Carlton,” Diana Oreck, vice president of the hotel chain’s Leadership Center told Forbes. “As a guest, you can go from Ritz-Carlton to Ritz-Carlton around the world, and we will know and be able to deliver what you like.”

Human and robots working together

While the potential for robotics to transform the industry cannot be underestimated, human staff can take comfort in the fact that they won’t be replaced anytime soon. Indeed, “robots like Connie can augment cognitive capacities and help staff do their job,” says Pemberton.

“Your friendly human concierge may not be able to moonwalk as well as Mario, but he possesses the skills and nuance that a robot just can’t replace.”

However, this is just the beginning – and the concept of artificial intelligence is evolving rapidly. “There are so many untapped possibilities, with potential benefits for consumers and the hotel industry alike,” Pemberton says. “The future looks very interesting indeed.”

The Hotel Experience Gets High-Tech
Why Hotels Are Taking Wellness Seriously
Why Select Service Hotels Are Coming to the City Center
Why Historic Buildings Make Great Hotels
How Hotels Are Going on a Fitness Kick
How Hotels Are Meeting the Demand for Quality Meeting Space
Why Lifestyle Hotels Are Not Just for Millennials
How Many Tourists Is Too Many?
How France’s Hotels Are Rethinking Style and Space
How Hotels Are Upgrading Their Sustainability Efforts
Big Hotel Brands Set Their Sights on Portugal’s Cities
Spain’s Hotels Power up for an Eco-Friendly Future
Australian Luxury Hotels Up Their Game for Chinese Tourists
The Rise of Poshtels: How Hostels Went From Grit to Glam
How Wellness Became Big Business in America
High-Speed Rail Propels Hong Kong Hotels
Four Things That Got People Talking at Expo Real
Why More Consolidation Is on the Cards for Hotels
How African Luxury Tourism Is Heading off the Beaten Track
How Serviced Apartments Are Tuning Into Modern Traveler Needs